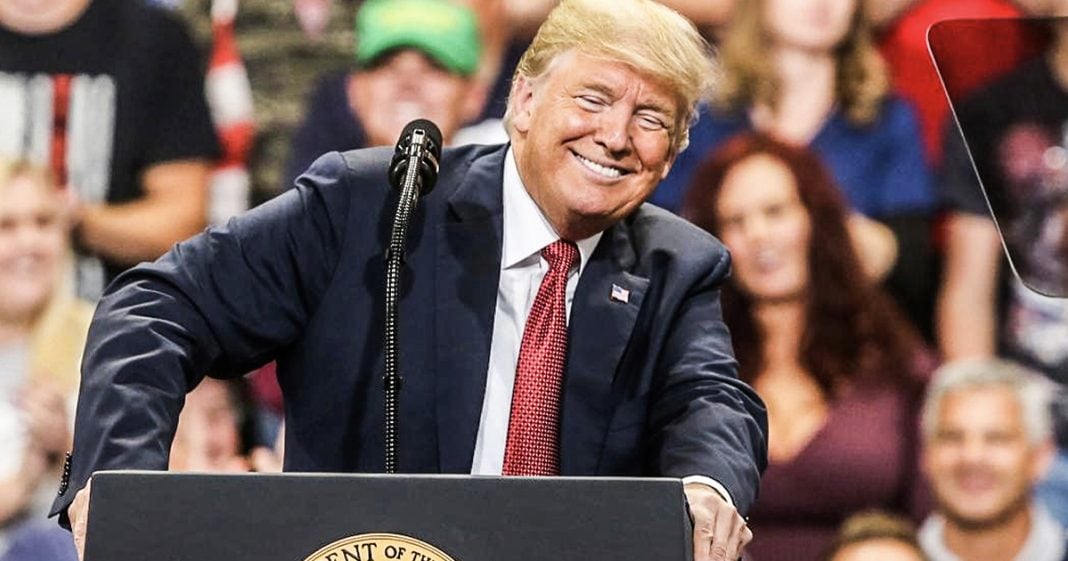 On Saturday evening, Donald Trump held another one of his rallies where he told the crowd many lies, but the one that sticks out the most is when he told them that ALL of the Democrats have signed onto an Open Borders Bill in the Senate. This legislation doesn’t exist – Trump absolutely made it up. Not only did his base applaud him for the statement, but they all likely believed the lie and won’t bother to do any research. Ring of Fire’s Farron Cousins discusses this.

On Saturday evening, Donald Trump did another one of his little rallies out there in Topeka, Kansas, where of course, he boasted about the fact that he got Brett Kavanaugh on the US Supreme Court and thereby doesn’t really care anything about women in this country. But nonetheless, he was bragging about it, and it was a big victory for him, right?

I mean, he managed to hamstring the FBI in a way that made it impossible for them to properly investigate Kavanaugh. Hell yeah, kudos to you, Mr President, for rigging the system not just in the US Senate but also within our intelligence agencies. That is a very rare feat, and you pulled it off like the jackass that you are.

But the speech got weirder. The speech took a very weird turn somewhere down there. I mean, Donald Trump actually had a couple things he could’ve bragged about. But instead, he took the time to just start making things up. The scarier part is that that audience literally ate it up. They loved it. Raucous applause every time this man fabricated a story and told it to them.

Here’s one of the more grotesque ones. Donald Trump claimed during this little rally that there was this open borders bill kicking around the US Senate. Here is his exact quote from that rally. “Every single Democrat in the US Senate has signed up for the open borders, and it’s a bill, and it’s called the Open Borders Bill.” What’s going on? And it’s written by, guess who, Dianne Feinstein. No such bill exists. As far as I know, no such bill has ever existed. There are literally zero Democrats in the US Senate right now calling for open borders. Trump made that up. He made up a piece of legislation, tried to tack it to Dianne Feinstein as if she’s some kind of leader for the Democratic party. The crowd ate it up. They loved it.

There is nothing this man can say or do to make these idiots turn against him. Yeah, it’s okay to call them idiots, because they are. If you’re going to sit there and let this con man lie to your face by making things up that you can easily verify with a very quick Google search, then you’re an idiot. But that’s Trump’s base.

But these people out there wearing those red MAGA hats, showing up at these rallies, waiting outside in the heat for hours just to go in and see this billionaire lie to them, those are idiots. There is no helping those people. There is no saving those people. They are hell bent on destroying not just the country but their own lives, because they have to understand this one very important thing. There is nothing that this president has done since taking office that has benefited anyone outside of the top 1%.