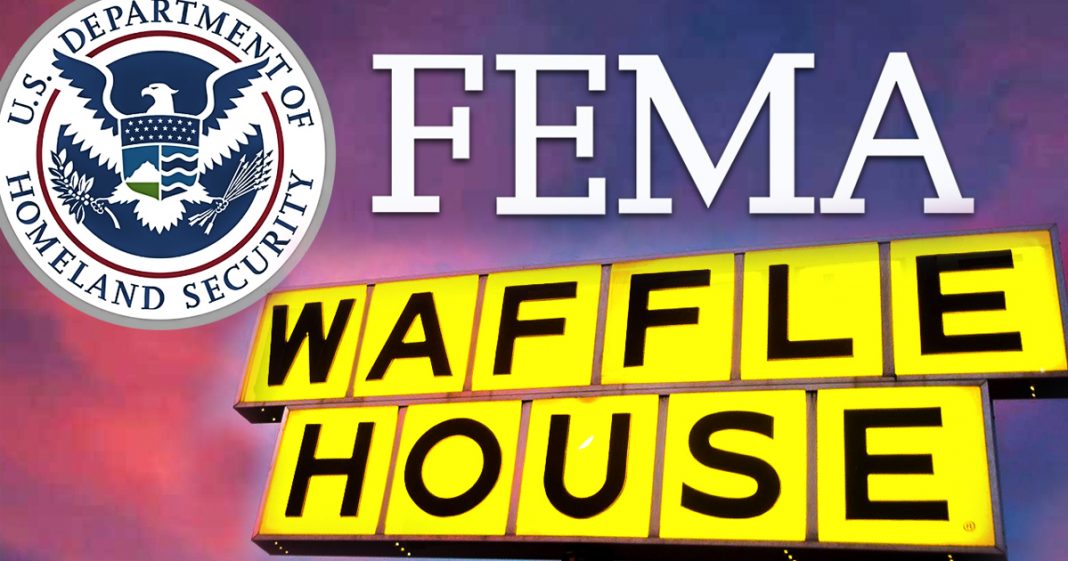 Via Boom Bust RT America: Ahead of Hurricane Florence, emergency managers watched the so-called Waffle House Index, an informal gauge for FEMA, the Federal Emergency Management Agency, to determine how quickly a community might bounce back economically after a disaster. Mollye Barrows joins Bart Chilton to discuss.

Bart Chilton: Ahead of Hurricane Florence, emergency managers watched the so-called Waffle House Index, an informal gauge for FEMA, the Federal Emergency Management Agency, to determine how quickly a community might bounce back economically after a disaster. Former FEMA administrator Craig Fugate started using this when he was the Florida Department of Energy and Management Commissioner. Here now to explain is legal journalist Mollye Barrows with Ring of Fire Network joining us from beautiful Pensacola, Florida. Mollye, thanks for being with us. How does this Waffle House Index actually work?

Mollye Barrows: Well, Waffle House is good at so many things. Who knew that they were a model for disaster preparedness? Of course, the 24-hour chain is often open during natural disasters, providing hot meals for people in the community as well as first responders. They’re also a meeting place for people in the community. They can disperse resources as well. They have three color-coded indicators. Red is we’re closed, don’t stop by. Yellow is we’re open, but we’re serving a partial menu, and then green is we’re open. It’s business as usual, full menu.

This is helpful for emergency responders and agencies like FEMA, because the quicker businesses bounce back in any community affected by a disaster, that’s a good sign. It tells them, hey, the sooner they’re bouncing back, the sooner that those economies are generating flow again. People are back to work. They’re spending money. They’re making money. When they’re delayed on getting back on their feet, that gives them an indicator of just how well a community is faring in the wake of a disaster. So Waffle House is like the canary in the coal mine. You know it’s bad if Waffle House is still closed.

Bart Chilton: It’s very interesting. I don’t want to make too light of it because it’s a really serious thing with natural disasters. But if it’s yellow, watch out for the scrapple. That’s maybe what’s left. If you don’t know what scrapple is, you’re safe enough that way.

Bart Chilton: Yeah, right. How did this all start, Mollye? I mean, they have some sort of history in dealing with disaster don’t they?

Mollye Barrows: They sure do. Of course, the Waffle House chain started in the South. It’s 25 states throughout the country now but primarily in the South, and they are located in a lot of these communities that are prone to getting natural disasters whether it’s hurricanes or tornadoes, bad weather, et cetera. Back in 1989, when Hurricane Hugo hit Charleston, that’s when they kicked it into gear and started to develop their own emergency disaster response plan.

Now, they open up a storm center anytime there’s a storm out there, so they can track its progress. They have teams of their employees from other locations on standby ready to jump in as soon as it’s safe to go in. They also have resources piled up whether it’s food, water, generators ready to go, and each location also has an emergency guide to help them prepare a protocol for what they’re supposed to do. All of this is extremely helpful for FEMA as well because the Waffle House is one of the first places often to open. So they can stage there.

The community can come there, maybe get a bite to eat as well as first responders, talk about what’s going on in the community, check on their neighbors, and basically use it as a meeting place for the community in the wake of a disaster as well.

Bart Chilton: It’s really, really interesting. We love numbers all the time. We show charts, but Waffle House is held privately. Back a couple years ago, I read data. It was worth over $400 million, so it’s primarily in the South, right?

Mollye Barrows: Yes, it’s primarily in the South. It started way back in 1955 in Georgia by a couple of guys. It wasn’t until the 1960s that it started to turn into the chain that you see today. In fact, I think originally it was called the Toddle House. Now, we know and love it as the Waffle House. It’s through some 25 states. It stretches from Florida to Pennsylvania, Ohio to Arizona. And their claim to fame among many others, as they say they, I guess, make 2%, use 2% of the country’s eggs in their food service. So this whole business model of fast food with table service really took off. It’s hit well, but like you said, it’s privately owned, and they don’t disclose their profits. But they certainly seem like they’re doing pretty good based on what they claim they sell.

Bart Chilton: Mollye Barrows, journalists at Ring of Fire Network. Thank you so much, Mollye. Great to see you.