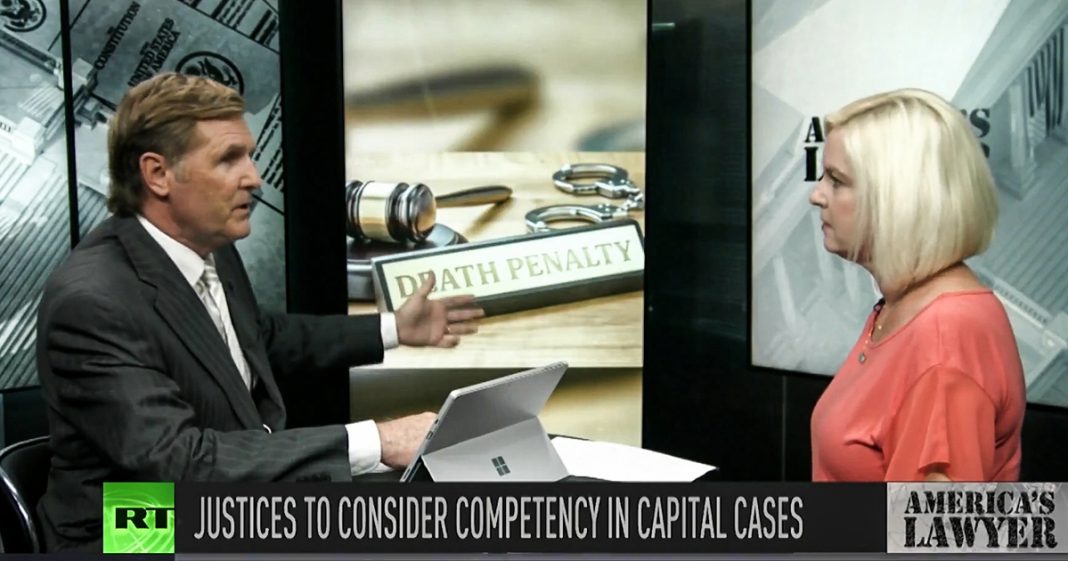 Via America’s Lawyer: Mike Papantonio is joined by Mollye Barrows to talk about two cases that may require the Supreme Court to step in and decide whether states can execute murderers suffering from mental illness.

Mike Papantonio: Two cases this Fall may require The Supreme Court to step in and decided whether states can execute murderers suffering from mental illness, and who no longer, allegedly, no longer remember their crimes. Joining me to talk about this is Mollye Barrows Legal Journalist for The Trial Lawyer Magazine. Look, the case that’s going up involves Vernon Madison.

Mike Papantonio: Okay, so Vernon Madison he’s been locked up for more than 33 years. Mobile Alabama is where he killed Julius Schulte. And so, The Supreme Court is going to hear whether or not we should go ahead and carry out the execution because Vernon says well I don’t remember everything.

Mike Papantonio: I would imagine that the family of Julius Schulte says we don’t really care-

Mollye Barrows: If he remembers.

Mollye Barrows: Yes, he was convicted in 1985 of killing the man that you just said. He was an Alabama police officer. He had a number of appeals for a variety of reasons. There were a couple of different issues with the sentencing itself, so he appealed it in 2015. That appeal was upheld. During that time he had a series of strokes. His health continued to deteriorate, and now he’s got a form of dementia. And although he knows that he is being executed for murdering someone he has no other memories of the crime. He can’t even recite the alphabet. His attorneys are saying it’s cruel and unusual punishment to kill a man who basically you’re not gonna get any retribution for his crime because he doesn’t even remember what he did.

Mike Papantonio: Well, okay. But let’s talk about retribution. First of all, it’s more than retribution, isn’t it? The death penalty also surrounds the idea of deterrence.

Mike Papantonio: I mean that’s one of the things that they’re arguing in Mobile, and they’re arguing in Alabama is look we don’t really care whether he remembers exactly the horrible thing that he did. He’s lived for 33 years longer than the victim. That’s the argument.

Mike Papantonio: We don’t really care whether he doesn’t know all the details. We’re not even sold on the idea that he doesn’t remember. And so, I mean it’s kind of … And plus they raised the issue, look, if the laws were right he wouldn’t have lived for 33 years. We would’ve killed him two years after he killed Julius Schulte. These are the arguments that are surfacing.

Mollye Barrows: They always come up, don’t they?

Mollye Barrows: With every single on of these cases it comes up for The Supreme Court dealing with the death penalty. They’ve got another case coming up in November, which is similar in nature although this particular inmate isn’t claiming dementia. He’s basically saying I’ve got this other series of health problems, which include these blood filled blisters, if you will. I know it’s gross, but he’s saying if you strap me to the gurney I’m gonna suffocate on my own blood. Long story short, these are aging inmates that are on death row. It creates a variety of reasons, which all go to either cruel and unusual punishment, in the minds of a defense attorney, or as you were saying there’s still some value for retribution. But they’re saying there isn’t any value in retribution because the deterrent factor is gone when they’re medically disabled, or somehow physically disabled.

Mike Papantonio: Well, but the deterrent to the public, you see.

Mike Papantonio: We know that Madison lived for 33 years after he killed Julius Schulte whose family had to live through that.

Mike Papantonio: And now Julius is dead, and this guy’s lived another 33 years. These are the arguments coming out of the court right now. This is what The Supreme Court is gonna hear. Now The Supreme Court has already heard two earlier decisions.

Mike Papantonio: Give me a run down on the decision. How do they impact?

Mollye Barrows: Well, basically the bottom line is The Supreme Court says you can’t kill anyone who is mentally disabled, who isn’t aware of what they’ve done. In these particular cases there is some level of awareness.

Mollye Barrows: At least for Vernon Madison. Russell Bucklew is not even saying that he didn’t kill the person. He’s just saying that he’s protesting the method by how they’re gonna do it.

Mollye Barrows: He actually offered them up, hey will you kill me by the gas chamber instead? The appeals court said no you didn’t really show us that, that’s gonna be any better for you then the lethal injection.

Mike Papantonio: I’d rather go by gas chamber than I would lethal injection.

Mollye Barrows: So, I don’t suffocate in my own blood is his argument. But it is interesting because if you go back to the deterrent question and I think that’s why, the point of this particular article that I read in The Atlantic anyway, was bringing it up because the appeals process takes so long you end up having these murderers have more value and attention in the court system than the victims themselves. It’s the same issues that come up, and is it really a deterrent to sit on death row for 30 years.

Mollye Barrows: Whatever the reason is.

Mollye Barrows: Whatever technicality you find to appeal on. And let’s face it-

Mike Papantonio: A prediction. Case number one that you described-

Mollye Barrows: It looks like it’s going in that direction. You’re right.

Mike Papantonio: I really feel he loses. I think case number two probably they’re gonna give this guy some kind of choice maybe that could be determined as cruel and unusual. I think he has got a better shot than case number one. We got just a couple of minutes.

Mike Papantonio: The bottom line to this argument coming out of Mobile is that it’s irrelevant. It’s irrelevant whether the person remembers all the details, or not. It doesn’t make any difference.

Mike Papantonio: What’s your take on that?

Mollye Barrows: If it’s irrelevant? I think the whole issue of the death penalty really, to a great extent is irrelevant. If it’s about deterrent then we need to come up with a system that makes it more of a deterrent because if you’re a person committing a crime (A) like you said earlier, they may not necessarily think they’re gonna get caught, and if they are caught then they have this whole legal system that basically values the murderer over the victim because they put so many resources into helping with appeals, and this, that, and the other, and in some cases it may be warranted and justified.

Mollye Barrows: It’s a tough one.

Mike Papantonio: Mollye, thanks for joining me. Remember my predictions. Number one-

Mollye Barrows: I remember it.

Mike Papantonio: Number two you got some possibilities there.