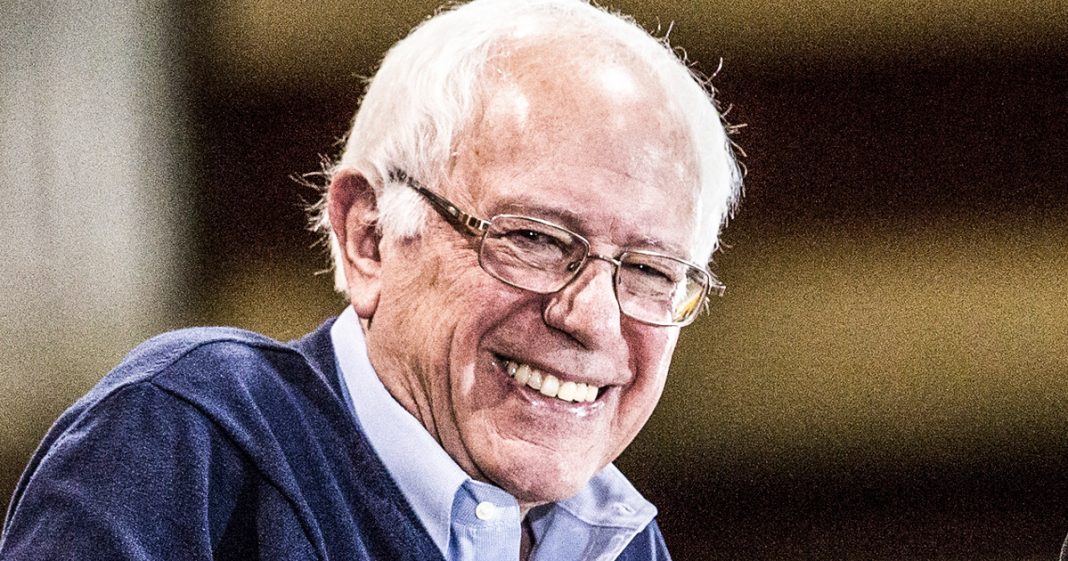 Last week, Senator Bernie Sanders was out for a walk when he saved a woman from walking into oncoming traffic. The woman posted a selfie online with the Senator and he then returned back to work where he told no one about it. His staff only found out about it after the post went viral. This blows a hole in the anti-Bernie crowd’s claims that Sanders is only out there to promote himself, as Ring of Fire’s Farron Cousins explains.

In a little-noticed story that happened last Thursday, Bernie Sanders, independent senator from Vermont, former Democratic presidential candidate, went for a walk in the middle of the day, just taking a break from things in the Senate. He went for a walk. While he was on that walk, he saved a woman’s life. Saved her from walking into oncoming traffic and getting hit by a car.

Now the woman, Amy Corrado, took a selfie with Bernie and posted the caption, “Bernie Sanders just saved my life,” blah, blah, blah. “You know, he’s much taller in person, hence the weird selfie.” She was on her way to a guitar lesson. Bernie saves her life. He finishes his walk, goes back to the Senate and did the most amazing thing imaginable. He didn’t tell anyone. He did not run back to the Senate and tell all the staffers, “Hey, I just saved a woman’s life.” “Hey, this person’s still alive, or at least not injured because of me. Can we put out a press release? Can we tweet about it? Can we do something?”

No, the man didn’t say a word about it. Just went back about his business. The only way his staff actually found out about it is because they ended up seeing that viral selfie tweet that the young woman sent out. They saw that online and then had to say, “Bernie, what the hell just happened?” He’s like, “Oh yeah. I stopped her from walking into traffic. She was going to get hit by a car.”

Now, the reason I’m telling this story is because there’s a lot of people on the left side of the aisle, those Democrats, most of them corporatist, kind of centrist Democrats, but you know who they are on Twitter. You see them all the time. They talk nonstop about how Bernie Sanders is only in it for Bernie Sanders. The only thing he cares about is his ego. The only thing he wants to do is further his own cause and make more money.

Well, don’t you think that if that were true, he would have been bragging from the rooftops that he saved this young woman’s life? I mean, she admitted he saved his life. It’s not like he was making the story up. She had already told it, but he didn’t bother to do that. He didn’t linger on it. He didn’t pat himself on the back. He just did what a normal, decent human being would do in that situation, and that to me is what sets Bernie Sanders apart. It’s that he does what normal human beings would do, just motivated by basic kindness and concern for other human beings, and that is a quality I have to say that is missing from too many of our elected officials in Washington, DC on both sides of the aisle.

I mean hell, it’s missing from elected officials from coast to coast and border to border in this country. Just basic concern for the average American citizen. I mean, for the average human being.

Bernie Sanders has it. He doesn’t flaunt it all the time. You know, we see this anger from him about the top 1% and the wealth inequality. It’s not because he hates millionaires and billionaires. It’s because he sees the suffering of the rest of the 99% of this country. He just wants to help.

That is what he did last Thursday when he saved that young woman’s life, and that’s why he didn’t go out there boasting about it. That’s why he’s not out there today, constantly boasting about winning the fight with Amazon when they agreed to raise their workers’ wages to $15 an hour.

Bernie Sanders, not just with his policies, but with the way he is as a human being. Those are the kinds of people that we need more of running this country. Those are traits that are all too rare in today’s society. And that is why Bernie Sanders is still one of the most popular politicians in the United States, and it’s time for the entire Democratic Party to understand that it’s not about that it’s Bernie, it’s about what Bernie stands for, and that is basic decency and concern for every human being on this planet.