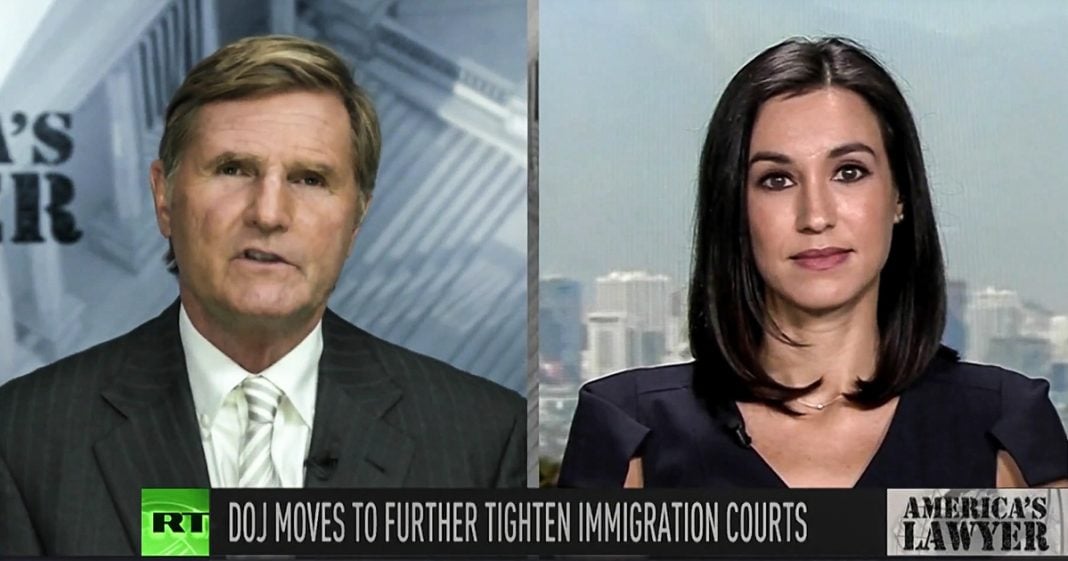 Mike Papantonio: US Attorney General Jeff Sessions is ruled that immigration judges have no inherent authority to dismiss cases, provoking an outcry from immigration law groups. Joining me to talk about this is Brigida Santos. Brigida, in the ruling, Sessions for bad immigration judges for dismissing cases is an act of judicial discretion. We’ve had that around for a long time where a judge can use some discretion. Tell us about that.

Brigida Santos: Well, unlike the federal judiciary system, the Department of Justice is responsible for adjudicating all immigration cases in the United States. Historically, however, like you said, immigration judges have used their discretion to dismiss immigration cases that they believe are a waste of time, or those that need more time. Sessions, though, has ruled that the immigration judges have no authority to dismiss cases unless the Department of Homeland Security asks them to, or unless an immigrant is granted legal status, or can prove that they’re in the United States legally. So, he’s taking away judges powers here.

Mike Papantonio: Well, the criticism that’s been coming out, I guess, the rationale for this has been that there’s been this political movement, and that the judge’s discretion is more based on politics than anything else. That’s what we’re seeing here. This ruling has come under sharp criticism from the American Immigration Lawyers Association. You can imagine this is what they do every day. This is their job. They’re saying, this is wrong. What did they have to say about it? What is their big criticism of this?

Brigida Santos: Well, they say that the ruling is actually a political move to minimize the authority of immigration judges in their own court rooms, and to improperly use the courts as an extension of White House law enforcement policies. So, they’re claiming that the White House is doing the same thing that they’re being accused of. That the association says Sessions move will result in a huge backlog of cases. And they accuse the Attorney General of trying to limit the independence of judges.

Mike Papantonio: You know what we’re seeing more and more Brigida, I don’t know if you’re seeing it introduced into this discussion, but I certainly am. And that is that the new discussion is well, look what’s happening in London, look what’s happening in Paris. Look what’s happening in Sweden where they have lost control over immigration. I’m hearing that argument more and more, and I’m actually hearing it from the DOJ, Sessions is now buying into the argument that we’re hearing from Trump that says, that you’re losing your culture in Sweden, you’re losing your culture in Paris and in London. I don’t know that if you really analyze that that it’s really accurate. But that’s an argument to justify these types of rulings that we’re hearing more and more.

Sessions is currently considering whether asylum seekers are entitled to bond hearings. Think about that. Are they even entitled bond hearings? But what would happen if Sessions were able to decide that immigrants don’t have any eligibility for any kind of hearings at all? What’s your take?

Brigida Santos: Well, Sessions decides that immigrants aren’t eligible for bond hearings, thousands of people are going to end up behind bars for extended periods of time while they wait for legal proceedings. We’re essentially saying that you are guilty until proven innocent.

Mike Papantonio: Brigida, in this decision, the next step is rigorous, a very rigorous effort by Sessions to undermine judicial independence. That’s what this is about. To say that a judge has no discretion. When you minimize that type of independence, and you begin by saying, well, we’re going to let an immigration court do that. I think we’re going to start seeing that infect the whole judiciary more and more with this administration’s leanings, what’s your take?

Brigida Santos: Absolutely, Sessions and the Trump administration do not want immigration cases dismissed, they do not want any leniency shown to the undocumented. And by asserting his authority here, Sessions is just doubling down on the administration’s war on immigrants.

Mike Papantonio: Yeah, and I think we’re going to see it. Right now, we have this thing with Sessions trying to make up to Trump in a lot of ways. I think this is the way he makes it up. Brigida, thank you for joining me, okay.