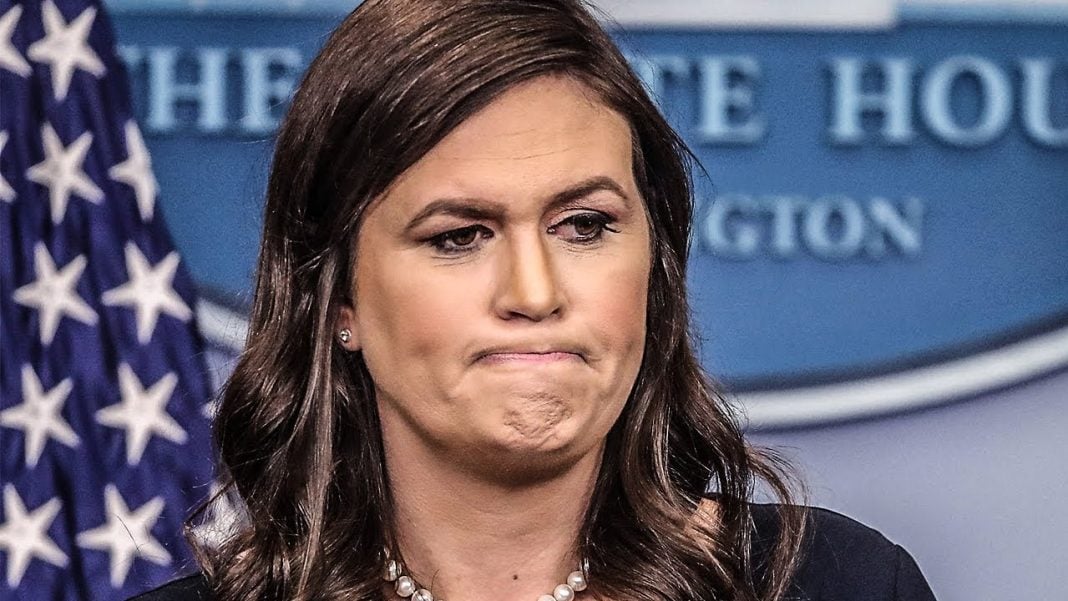 Our first question tonight comes from Robert @rjung_ch who asks, “I have a question #askROF, what is happening with Sarah Huckabee Sanders these days? Why don’t we hear her lies on a daily basis anymore? Was she fired or what?” Ring of Fire’s Farron Cousins discusses this issue.

Our first question tonight comes from Robert @rjung_ch who asks, “I have a question #askROF, what is happening with Sarah Huckabee Sanders these days? Why don’t we hear her lies on a daily basis anymore? Was she fired or what?” Unfortunately no, Sarah Huckabee Sanders has not been fired. She’s probably never going to be fired unless it turns out she was the mysterious author of that New York Times that got Trump so angry. Sarah Huckabee Sanders is probably one of the most loyal members of the Trump Administration alongside Kellyanne Conway. She’s a good little stooge for the President. She loves to go out there and tell people that what they’re seeing and what they’re hearing is not actually true, even though we know it is. She loves to insult reporters, call them fake news, attack them from the podium, call them liars even while she’s sitting there lying to our faces. She loves to play the victim as Donald Trump does when she’s kicked out of a restaurant because she’s a horrible human being. She’s not going anywhere unless she chooses to leave this administration.

The reason we’re not seeing so much from her these days, which if you look hard enough you will find it, I encourage everybody to not do that because she has not said anything of substantive value in the last couple weeks, well pretty much in the last couple years to be honest, but she is still out there. It’s just I think the media has kind of moved on from it. You know, like Kellyanne Conway. Kellyanne Conway still makes the TV rounds at least once a week but you’re not seeing all the headlines about her anymore even though she’s saying crazy stupid stuff every single time.

People are starting to get a little fatigued. We know Kellyanne Conway’s going to lie when she goes on with George Stephanopoulos or goes on CNN or Fox News or wherever. She’s going to lie. We know that Sarah Huckabee Sanders is going to lie when she steps up at that podium to do the daily briefing, but they’ve kind of cut back on the daily briefings. Not necessarily doing them so often. Not always doing them on camera. So, there’s less to talk about in terms of the crazy things that she says, but I think the media’s also realizing you know what, this woman comes out, she insults us, attacks us every day because we’re doing our job and she’s lying to us, so why should we waste our time writing stories about the stupid things that she says? About the crazy lies that she’s trying to pedal? We can better use our pages on our website or the pages in our paper or the time on our radio shows or podcast or TV shows talking about something that actually matters. We know that Sarah Huckabee Sanders will lie to us at every given opportunity. She’s even proven before that she’ll lie about things that don’t even matter, much like the President. You know? A stupid thing here, a silly thing there, that there’s no reason to lie about but they still will ’cause it’s just who they are as human beings.

So, I actually think it’s a good thing that we’re not seeing as much from her because that means that the media is tired of it. We’re still going to see stories when she says the more outrageous things, but the daily kind of here and there lies that she tells all the time, we’re not seeing a new headline every time those pop up and that’s actually a good thing for the United States. Thank you for your question.