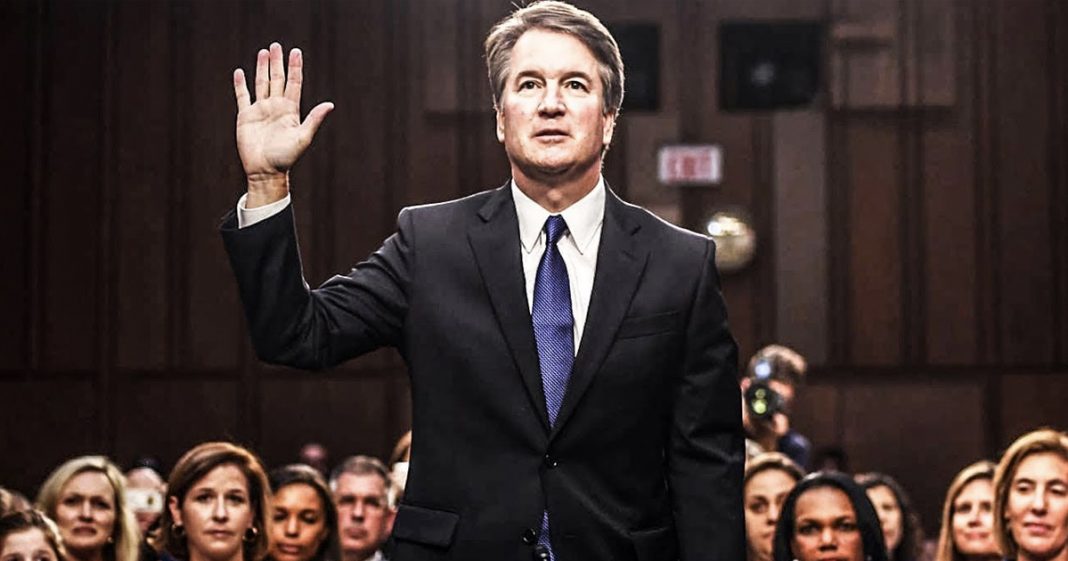 NOTE – This video was a response to a viewer question and it was recorded BEFORE Kavanaugh’s testimony last week where he committed additional perjury.

A question from @orion_con who asks, “We know for certain that Kavanaugh lied under oath to the senate in 2004 and 2006 regarding stolen emails. This perjury is grounds for removal from his current judicial appointment, so why don’t we hear more about it? This alone should stop him.” Ring of Fire’s Farron Cousins discusses this issue.

A question from @orion_con who asks, “We know for certain that Kavanaugh lied under oath to the senate in 2004 and 2006 regarding stolen emails. This perjury is grounds for removal from his current judicial appointment, so why don’t we hear more about it? This alone should stop him.” It should and that’s crazy to me. You know, even before the first accuser came forward against Kavanaugh, we already had evidence of four different times when Kavanaugh committed perjury in front of the senate judiciary committee. Yes, he was under oath and he lied. That’s illegal. That is.

That’s why Bill Clinton got impeached for lying under oath, and yet that whole story about Kavanaugh disappeared when the accusers came forward. I understand that sexually assaulting someone is a thousand times worse than lying under oath. I do. I get it, but we had already known about the perjury before the women came forward. The fact that Republicans didn’t even decide to, “You know what, Kavanaugh? You got to get out, okay? If you don’t get out now, you’re going to lose your current job because they’ve got all this evidence of perjury.” They didn’t care. They still pushed forward with it. That’s why I keep going back to this point that I’ve made time and time again.

Kavanaugh’s not going to be sitting on any bench for the rest of his life. We have that evidence of perjury now. Don’t think that the Democrats are not keeping that in their back pocket. Even if Kavanaugh goes to the Supreme Court, which is most likely going to happen, I mean hey, it could have happened already, I don’t know, but if he goes, he’s not going to be there for too long. Because the Democrats eventually get control of the senate again, they’ll launch investigations not just into the sexual assault, but into the perjury. They’re going to pull the documents. They’re going to pull the testimony.

They’re going to put them side by side and say, “He said this here and they contradicted it here by saying something the exact opposite, so one of these is a lie,” doesn’t really matter which one because it’s perjury. Then you get to impeach him. If he’s sitting on the lower bench, you impeach from there. He’s out of the court system for the rest of his life, at least on the judicial side. If he’s on the Supreme Court, you impeach him from there and then you got a vacancy once again. I don’t think that the Democrats, those in power, have actually forgotten about the perjury.

I think they think that nailing them on the nailing sexual assault is going to be a better issue to get him out and get his nomination out. Unfortunately, they didn’t count on the fact that Republicans have no problem with it. I mean watch Fox News if you can stomach it for 30 minutes and you’ll see that these people have no problem at all with sexual assault. CNN this past weekend sat down with a couple of Trump supporters and they said, “Look, even if he did it, it doesn’t bother me. He should still go to the Supreme Court.” They’re trying to write it off like, “It was in high school. All boys rape in high school.” They said that.

They actually said that. “All boys have done this in high school.” No, we haven’t by the way. If you think all boys do this, then I’m pretty sure you need to go speak to authorities right now because obviously somebody’s done this to you and they need to be held accountable as well. Republicans don’t care about the sexual assault. They’re going to push forward. The Democrats thought it would be enough to stop him. It’s been enough to turn the public against him, that’s for sure, and that’s also important, but it’s not enough to actually stop the nomination. That’s where the perjury comes in. You got to have that.