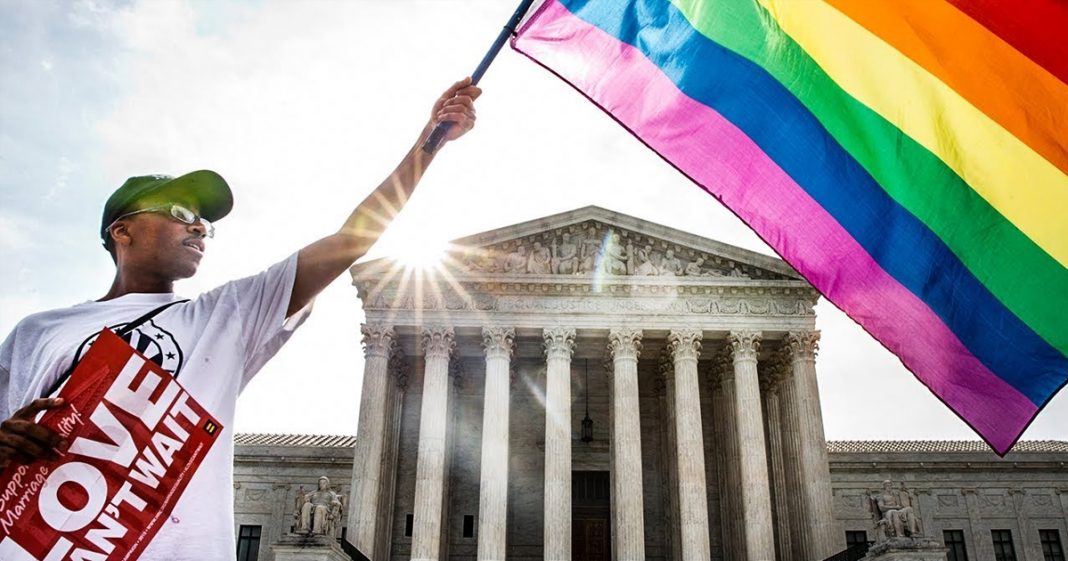 Recently, 16 states filed an amicus brief with the US Supreme Court trying to argue that these states should be allowed to fire people based on their sexual orientation alone, or their gender identity alone. Ring of Fire’s Farron Cousins discusses this issue.

Recently, 16 states filed an amicus brief with the US Supreme Court trying to argue that these states should be allowed to fire people based on their sexual orientation alone, or their gender identity alone. These states include Alabama, Arkansas, Kansas, Kentucky, Louisiana, Maine, Mississippi, Nebraska, Oklahoma, South Carolina, South Dakota, Tennessee, Texas, Utah, West Virginia, and Wyoming. Unless I’m wrong, all of these are Republican-controlled states, and the attorneys general for every one of these states signed on to this amicus brief telling the Supreme Court that if they take up an upcoming case that says that employer is allowed to fire someone for being gay, that they want to make sure that their state is allowed to let their employers do that too.

That’s what’s at stake here. 16 different states want to allow employers in their state to fire someone based on their sexual orientation. This is a threat to the entire LGBTQ community, as well as to everyone else. That is a thing people have to understand. You know, there’s still people out there who think that, “Oh, well, it’s LGBTQ. That’s not me. Why should I care about this? What does this matter?” Because there’s always a slope and it always starts somewhere. If you don’t speak up for Group A, but you happen to be in Group B, well guess who’s next on the agenda? Maybe you’re in Group E, so you got five more groups that are going to go down before you do, but it is coming for you as well.

Everyone should be concerned about this, not just because, oh, it may come for me later, but because of the gross injustice that these people in the LGBTQ community have to live with every single day. A nine year old kid this week committed suicide after being bullied for coming out as gay. A nine year old kid killed himself because of that, and here we have states, 16 of them, that want to say, “You know what? We want discrimination to be legal.” Their reasoning, their legal reasoning for this. is because they’re arguing that the 1964 Civil Rights Act, when it mentions you can’t be fired based on your sex, that only includes your sex at birth. You know? Whatever you were born with. That’s the only thing it protects.

It doesn’t protect any kind of gender identity later on in life, or any kind of sexual orientation, because it just says sex which means gender at birth, and so that’s what we’re going to go with. Totally strict interpretation of this. Laws cannot ever evolve or mean something different as things change over time. That’s what these states are afraid of. Change over time, but change is inevitable. Time is inevitable, and no matter how much Republicans want to try and stop time, there is nothing they can do to stop progress from happening, so they can file their amicus briefs.

The Supreme Court may even rule in their favor, but that is not going to stop. That is not going to stop these people from trying to just live their lives, and go to work like any other human being wants to do, and be treated as an equal regardless of sexual orientation, race, religion, gender, whatever. But these states trying to take that away from people because they’re run by a bunch of bigots and there is no other way to say that. To lighten things up a little bit, let’s talk about climate change.

It’s always a fun story. Well, in this case it actually is. You see, Texas Republican Representative John Culberson, Republican from Texas again, serves in the US House of Representatives, recently got busted taking $50,000 from his campaign funds and spending that money on trinkets and knickknacks for his office at home. When he finally got busted for it, which by the way, that is 100% illegal, he came up, he and his aides, came up with what might be the best response I’ve ever seen to somebody who got popped for corruption. And that is, he was buying these things because he wants to better understand climate change.

Now there is a reason they tried to use this defense here. Some of the things, not all, but some of the things that he purchased were fossils, and they said, his aides, said that he bought these fossils because he wants to learn more about paleo-climatology. He’s going to allegedly study these fossils to determine what the levels of carbon were at the time, millions of years ago, when the animal whose fossil it is was alive. So this man, John Culberson, with no advanced degrees at all, has no idea how to even study a fossil, or determine carbon levels in the atmosphere from said fossil, he is still somehow managing to do that, all in an attempt to avoid some kind of conviction for illegal use of campaign funds.

God, I wish that was the end of the story, but it gets so much funnier, because it turns out the place where Culberson bought those fossils, they don’t usually actually sell fossils. What they sell are replicas of fossils. So, Culberson going to take a replica fossil, a piece of plastic, and use that plastic to determine how much carbon was in the atmosphere when the animal that it allegedly came from was alive. Again, I so wish that was the end of it, but it gets much worse again because Culberson, as it turns out, the man who wants to study climate change by looking at fossils and making sure everything checks out, he’s also a science denier who does not believe that climate change is real. So, all of this big grand excuse to cover up his massive corruption unravels, literally at every point in his story.

It’s not a real fossil. You don’t have an advanced degree to even do the things you’re claiming you’re going to do, and you don’t even believe in the things that you claim that you’re going to be able to do from the thing that you bought that’s not even real. This is the level of insanity, folks, that we’re dealing with, with Republicans in office today. I have to say this was probably my favorite story that I have read this year, because it encapsulates everything that Republicans have become. The arrogance of thinking you can get away and fool the people. The stupidity of being duped into buying fake fossils in the first place. And three, the downright corruption of misusing campaign funds. John Culberson from Texas represents the Republican Party today better than anyone else in this country except for Donald Trump, because he is everything that the Republican Party stands for. Arrogance, stupidity, and corruption. The Holy Trinity of today’s GOP. We’ll be right back.