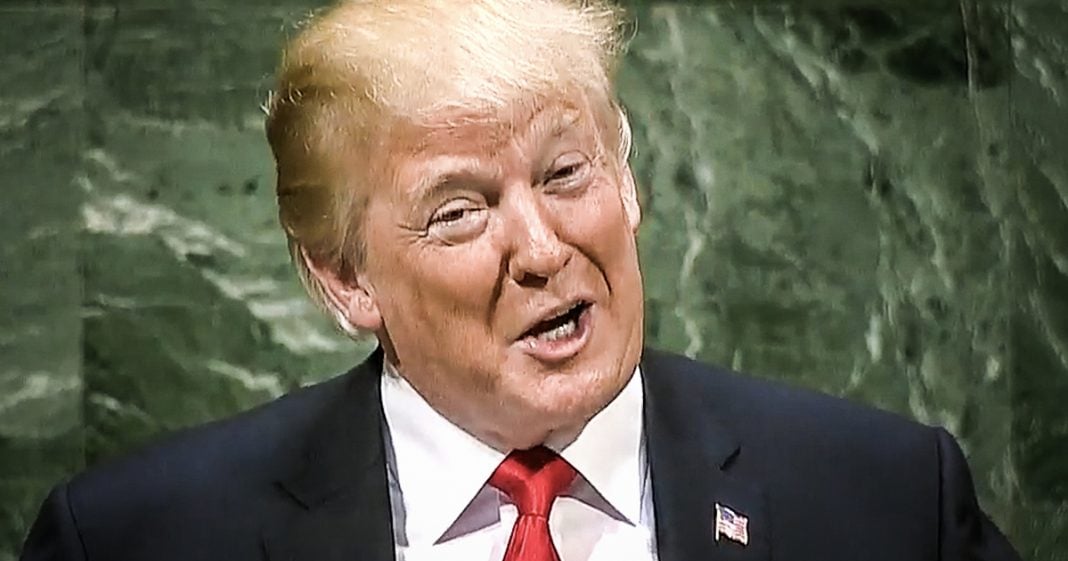 Donald Trump’s opening remarks to the UN general assembly didn’t go as planned, by the President’s own admission, but a day after the room erupted in laughter when he boasted about his accomplishments, Trump told reporters that everyone in the room was laughing WITH him, not AT him. But according to interviews with foreign diplomats who were both present and laughing, they said that they were 100% laughing AT the stupid things the President said. Ring of Fire’s Farron Cousins discusses this.

So obviously by now everybody knows that Donald Trump went to the United Nations earlier this week, gave his speech, everybody laughed at him in the General Assembly when he started talking about how great and successful he’s been as president. About a day later, Trump was asked about that, and he said, “No, no, no, no, no. They weren’t laughing at me. They were all laughing with me. We were all joking around. We were having a great time. It was fun. They all love me, but more importantly, they were laughing with me, not at me.” He was adamant that we know they weren’t laughing at him, even though when he made the comment he then had to wait for the laughter to stop and said, “I didn’t expect that response.”

They were laughing at you, and that’s not speculation either. That’s literally what they’ve been telling reporters since you gave that speech. BuzzFeed News actually talked to several of the diplomats who happen to be in that room with their delegations, and they admitted 100% we weren’t laughing with him. We were absolutely laughing at him. Here is what one Latin American diplomat had to say. “Sometimes when we see a behavior or listen to arguments or notions that seem so far-fetched, unreasonable, or insane, there is almost natural reaction of laughing.” Went on to add, “It is not laughing at a good joke, but a nervous laugh, or a bad joke turn laughable precisely because the guy who tells the joke doesn’t realize how bad it is.”

That pretty much sums up Donald Trump, right? We had another European diplomat who said, “What would resonate well at a political rally in America sounded a little awkward at the UN General Assembly. His words in the opening part of the speech were clearly addressed to a domestic audience, but as he did it in the Trumpian way, bragging ridiculously about being one of the best administrations in history, people in the audience reacted how they reacted.” We can now confirm pretty easily that yes, they think Donald Trump is a liar. As the Latin American diplomat there said, he used the word insane to describe what Trump did. Not necessarily saying that Trump is insane, but that what he did there was absolutely insane. Then the European diplomat who comes out and said, “Why is he telling us this? This was nuts. Yeah, I’m sure that would work great in a rally, but you’re at the UN. Not only is it irrelevant, but we don’t care and we don’t believe you anyway. Can we please just get down to business?”

This is one of the reasons why Donald Trump is such an ineffective leader on the world stage, because he has no interest in international affairs, or diplomacy with other countries. He just wants to talk about him. He just wants it to be about him, and he wants everybody else on the planet to care as much about his alleged victories as he does, even though really the man has such a short list of victories that he could carry it around on a tiny Post-It note and just show people, but that’s not who he is. This guy is all about Donald Trump and that is that classic narcissism that we see coming out of him every time he gets on the global stage. As long as this man is president and able to go out there and speak to foreign dignitaries in places like the UN, and the G7, and all of that, as long as he’s doing that, he is going to continue to be a national embarrassment, and worse, a laughing stock around the rest of the world.