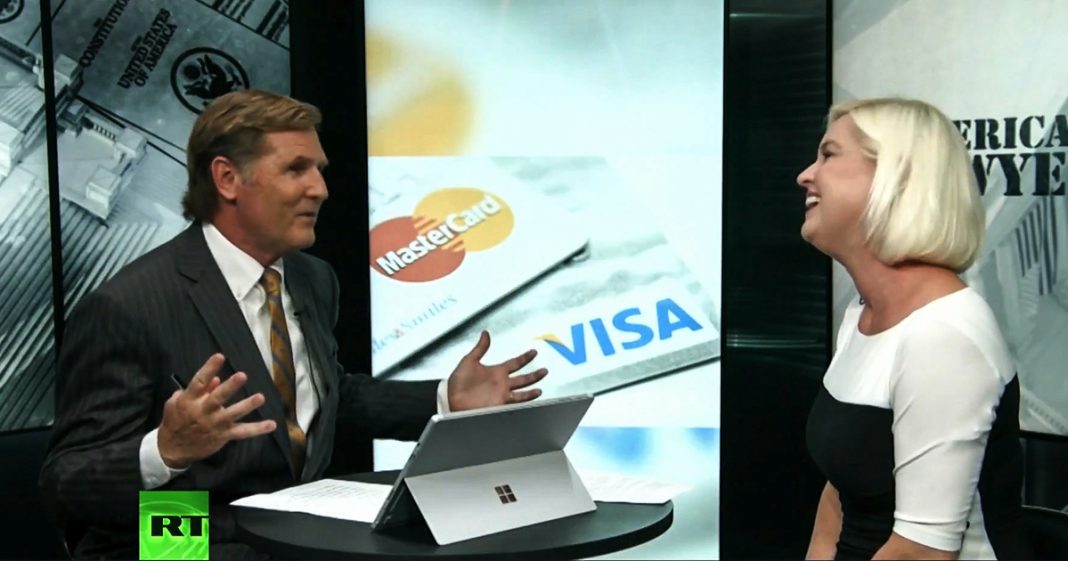 Via America’s Lawyer: Visa, MasterCard, and a number of US banks have agreed to pay an unprecedented $6.2 billion to settle a long-running lawsuit over fees when making a payment through a card. Mollye Barrows joins Mike Papantonio to discuss.

Mike Papantonio: Visa, MasterCard, and a number of US banks have agreed to pay an unprecedented 6.2 billion dollars to settle a long-running lawsuit brought by merchants over the fees they pay when they accept payment through a card.

Mike Papantonio: But, you know, the truth is, it’s not, because, how much did the companies make? They’re paying out 6.2 billion dollars for fraud. That’s what we’re talking about.

Mike Papantonio: They kept it a secret. It’s fraud. First of all, explain the case briefly. And tell us how much they made doing this.

Mollye Barrows: Sure. What’s interesting to me is that this lawsuit was filed a decade ago, over a decade ago, in fact, 2005. So they’ve been going at this for some time. The National Retail Federation is heavily involved now, but they were not involved in the initial lawsuit, which was brought on by thousands of retailers who were saying, “Hey, you’re jacking up our costs with these swipe fees,” which is basically the cost of doing business for a bank card.

They said, “We can’t keep passing these costs onto our customers. It’s 2%-4%. They’re not gonna buy as much when they’re in our stores. We can’t give them other options. You’re prohibiting us by your policies from giving these customers other options on how to pay for their items. And this is basically cutting into our bottom line, because it’s hurting our business.”

So this has been going back and forth for some time with some attempts towards a settlement, the Supreme Court got involved at one point.

Mike Papantonio: Why did the Supreme Court get involved? First of all, the settlement was thrown out to begin with, by a federal judge, the initial settlement. Tell me about that.

Mollye Barrows: Yes. Basically they did come to a settlement. At one point, that was gonna be about 5.7 billion. But 8000 retailers had dropped out by that point, so it almost took the heart out of the case, and the Supreme Court said, “Let’s table this.” Then the National Retail Federation got involved. They appealed it. That’s how it got tabled, basically. They appealed it, then the Supreme Court upheld that appeal, which allowed the case to move forward and basically be heard again.

So this is a result of that case being heard again, although the National Retail Federation still isn’t extremely happy with it, because this is, like you said, just a small amount compared to the 250 billion in swipe fees that they made over the time period that this lawsuit was filed.

So this 7.25 billion is just a drop in the bucket. They’ve made no effort to address the policies that resulted in this enormous amount of collections.

Mike Papantonio: Yeah, exactly. We got 250 billion. This is the cost of doing business.

Mike Papantonio: In other words, if you can make 250 billion dollars, will you pay out six billion dollars every 20 years? Basically, that’s kind of the analysis.

Mollye Barrows: You got it.

Mike Papantonio: Is it a good business decision? And so, here we’ve got something to where they paid out 6.2 billion dollars. But they are still ripping people off on the swipe. How does the swipe work?

Mollye Barrows: Exactly. Basically, like you said, it’s the cost of doing business. It’s the transaction fee when a bank customer says, “Hey, I wanna use my card.” That cost is passed onto the retailer. So it’s a transaction fee that the retailer passes onto the customer for the convenience of using that card. And because so many people use those cards, retailers know that they can’t necessarily quit using them all together. So they feel like they’re prohibited in the options that they can give customers. They want them to spend more money in their store. They feel like these rising swipe fees keep those customers from spending more money with them. So as a result, these banks are making just billions and billions of dollars on these fees. And then, they’re keeping it for themselves and passing it on as rewards, if you will, to customers and various other incentive programs within the banks.

But it’s basically like, “Hey, we know it’s easy to use these cards. We don’t want you to feel like … ” we’re basically a cashless society to a great extent now, so they know that they have these retailers over a barrel.

Mike Papantonio: Mollye, thank you for joining me. I don’t predict this is ever gonna get any better, because banks and corporations right now control the politics of American democracy almost in every-

Mollye Barrows: We need a trade pact. We need to get back to trading.