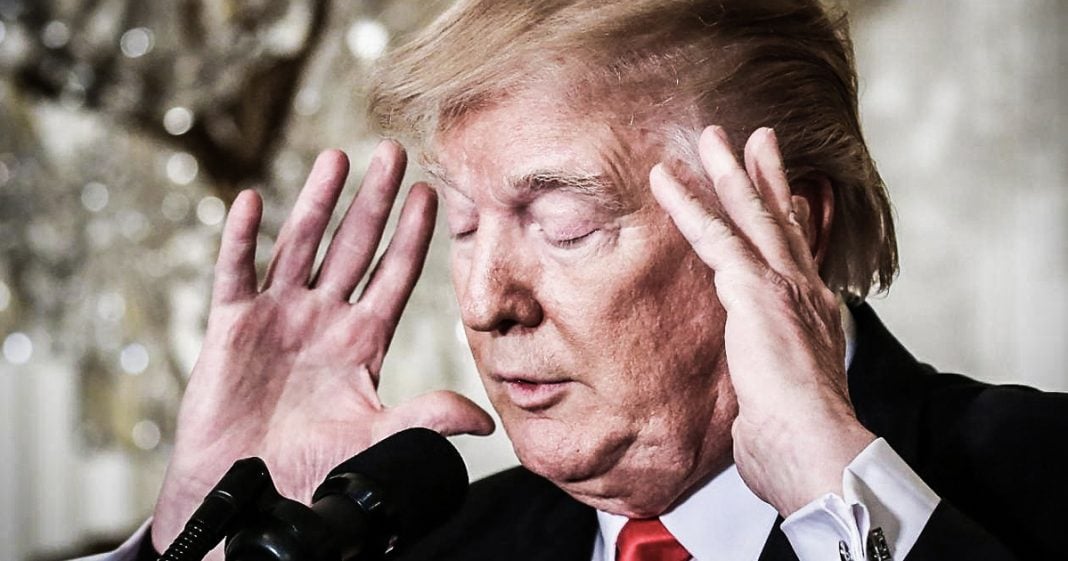 Voters in the Rust Belt are not happy with Donald Trump at all. His approval rating in the states that handed him his electoral victory are in a freefall, and these sagging numbers are going to add to the Republican defeat in this year’s midterms. With only a few weeks to go until voting, and Trump’s tariffs weighing heavily on their minds as the cost of these new measures hits them the hardest, they are looking to Democrats to save them from the very policies they voted for. Ring of Fire’s Farron Cousins discusses this.

Democrats have a little bit more reason to be optimistic about the coming midterms in a few weeks. According to new reports, Donald Trump support in Rust Belt states, the very states that he was able to turn blue or at least get enough of the majority in order to get the electoral votes needed to win the presidency, those states put him in office. Those were the states ignored by Hillary Clinton, but now, they’re turning on Donald Trump. States like Wisconsin, Minnesota, Pennsylvania, Ohio, they’re all feeling the effects of Donald Trump’s trade wars, and this doesn’t even include all the farmers out in the Midwest. It isn’t just that Rust Belt area up in the Upper Midwest, but they are starting to realize that Donald Trump has conned them. Donald Trump wasn’t telling the truth and Donald Trump’s policies are starting to wreck their lives.

That’s what’s happening in the Midwest right now, in that Rust Belt, with the new tariffs on steel, on aluminum, things like that, manufacturing is coming to a crawl in many of these areas. Donald Trump’s approval rating, the highest one he has in those states is 45% in Pennsylvania. He’s at 42% in Wisconsin, 42% in Michigan, 44% in Iowa, 40% in Minnesota, those are really, really, really bad numbers heading into a very contentious midterm.

Republicans who have no idea what to do at this point are trying to spend millions upon millions of dollars just to save seats in those states. That’s what’s so sad about it for them and it’s a sadness that’s not really a sadness. I have no empathy for these horrible human beings. It’s sad because they’re no longer trying to win additional seats. They’re not trying to pick anything up. They’re trying to save a few that they have to make the blue wave less intense.

Right now, they’re trying to just stem the hemorrhaging. There are five Senate seats and five House races within the Rust Belt that were once considered solid Republican that are now considered to be toss ups. There were several Democratic Senate nominees that Republicans were confident just six months ago they can flip those seats, but now the Democrats in those races actually hold at least an 11 point advantage. The Republicans are in for a massacre in the midterms and they understand that, so that’s why they’re diverting so much money into these states but it’s not going to help.

The voters in there, one, according to the reports, they don’t have Hillary Clinton to hate anymore so they don’t have somebody to vote against in these races. Two, they understand more importantly that Donald Trump conned them, that he’s a horrible human being and an even worse President, and that he’s never going to deliver on the jobs or the economic activity that they, the average worker, were promised. They’re not in the top 1% so they haven’t seen these big economic gains that the rest of the millionaires and billionaires have seen. They just see their paychecks actually shrinking. Their buying power, because of inflation and decreasing wages, shrinking by 3% in the last 12 months alone. Their paycheck doesn’t go as far anymore, and they know who’s in charge, and that is 100% every single branch of the government Republicans and that’s why they’re going to make them pay in this year’s midterms.