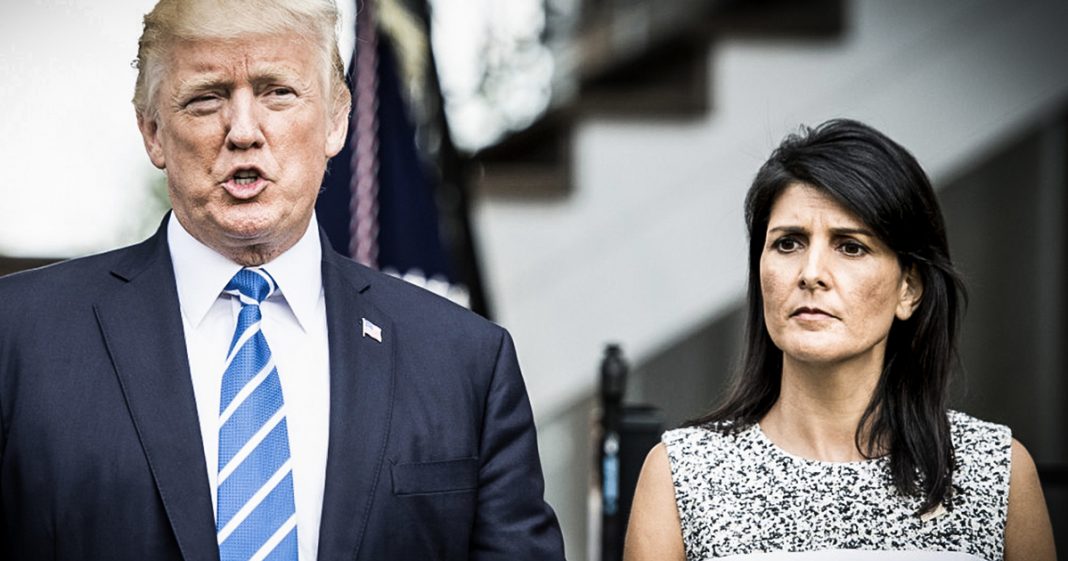 According to conservative Washington Post columnist Jennifer Rubin, it isn’t that far-fetched to believe that Trump’s UN Ambassador, Nikki Haley, could resign her position and run for President against Trump in 2020. This is actually something we’ve mentioned in the past, as Haley has frequently found herself at odds with the President, though she agrees with him more times than not. Ring of Fire’s Farron Cousins discusses the possibilities of this scenario.

Conservative Washington Post columnist Jennifer Reuben has a new theory out there that’s actually pretty believable. Her new theory is that Nikki Haley, Donald Trump’s UN ambassador, might be planning to resign from her position in the near future in order to actually run against Donald trump in the primary for the 2020 nomination from the Republican party for the presidential race. So according to Reuben, it is entirely plausible. Now, she’s not saying this is 100% gonna happen. But it’s plausible that somebody like Nikki Haley would resign her position as the UN Ambassador in order to run against Trump in 2020. Now, believe it or not, you can go back through the archives here. This is actually something that we had suggested not that long ago. Nikki Haley has butted heads with Trump on a lot of issues. Now, don’t get me wrong. She has agreed with Trump on more issues than not. But on a few key items, she’s actually been willing to butt heads with him and has shown that she doesn’t exactly agree with his style of governance. She’s certainly not a never Trumper. But she’s also not an always Trumper.

So she has already aligned herself and Reuben points this out in a very interesting position to where the never Trumpers can’t hate her because she’s gone against him. But the always Trumpers also can’t hate because she’s gone with him enough. She has ridden that fine line perfectly, not to mention the fact being a woman could actually increase the Republican party’s chances of winning in 2020, even though I know they did win white women in 2016. But that phenomenon is not likely to carry back over into 2020. We’ve seen how disgusting Donald Trump is, how he always, 100% of the time sides with the accused instead of the accusers in sexual assault allegations. So yeah, women, a little unhappy with Donald Trump right now. Republicans could bring them back by putting in a strong person like Nikki Haley. Now I agree with every single thing Nikki Haley has to say about politics and policy. But I’m not going to deny the fact that she is a strong woman and a strong leader. I just don’t like where she is leading us. Difference there. Nonetheless, I think it’s incredibly likely.

It may not be Nikki Haley, but I do think Trump’s going to be a primary challenger. It may come in the form of a John Kasich, who did not do very well in the 2016 primaries. But hell, he’ll give it another shot. It could be a Nikki Haley type. It could be a Ted Cruz if he’s desperate enough. But either way, I think Trump is in for a big fight as long as, obviously, he’s still in office and able to run again in 2020 because that’s the biggest wild card there. If something were to happen, if Donald Trump gets impeached or resigns from office before the 2020 election, that’s when things are gonna get interesting because I think Haley would absolutely try to challenge Pence, tie him to Trump and then she could very easily become the first female president of the United States. Kasich, a more moderate, but still closeted racist Republican, could defeat a Mike Pence in a primary, get the nomination and then if the Democrats put up somebody as weak as they did last time, it’s likely Kasich could win.

Then we’d see the same policies we see today just in a much more polite wrapper. Same thing with Nikki Haley, same thing with Mike Pence. They’re not gonna change the policy. They’re just gonna change how it’s presented to the public. Nonetheless, Trump’s in for a very hard fight from this point forward, especially if Democrats take back Congress in this year’s midterms and there’s really no scenario under which Donald Trump comes out of all of this unscathed at this point.