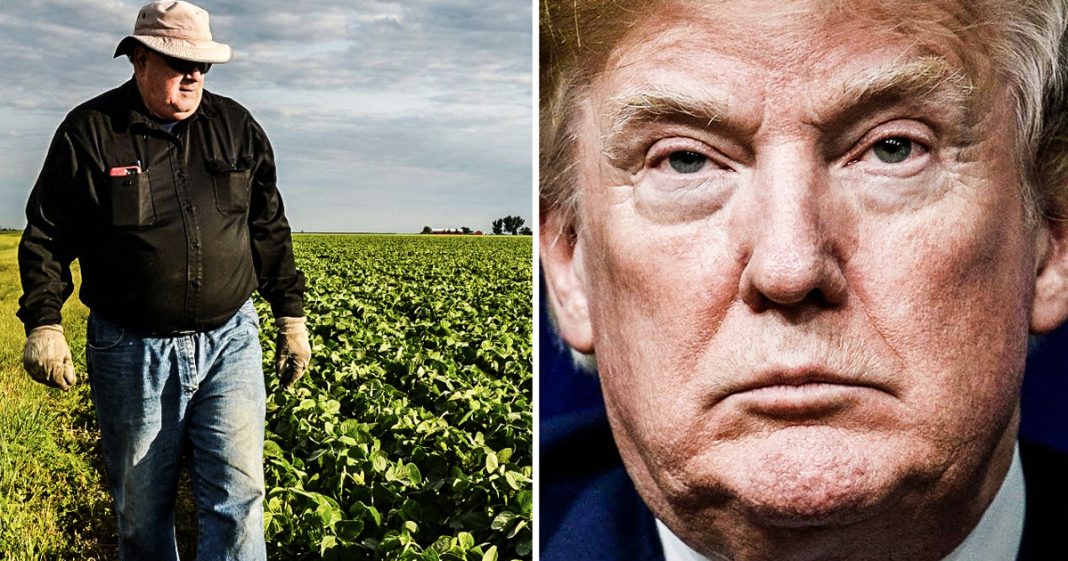 Midwest farmers in the United States are not happy with Donald Trump’s trade wars, and they’re even less happy with the bailout that he gave them recently. Farmers are now saying that these bailouts have not provided enough relief to save them economically, and they don’t know how they can continue with their farming lifestyle under the President’s policies. Ring of Fire’s Farron Cousins discusses this.

Farmers in the Midwest of the United States are starting to understand that Donald Trump’s bailout, that he’s offering them because of how badly his tariffs have hurt them, the bailout’s really not gonna do a single thing to prevent massive economic losses and possibly the loss of their entire way of life due to the massive tariffs that he put in place. Here’s what farmers in the Midwest have recently been saying. They’ve been saying that it’s not fair, I’m a corn farmer, yet most of the benefits go to soybeans, which China’s the biggest importer of soybeans from the United States so they get most of the money. Well that’s not fair to the corn farmer over here, whose goods are also being taxed to hell and back with tariffs. He can’t sell them. They’re losing more money and yet they’re bailout is only a couple pennies per bushel. That’s not enough to help them survive.

It is the same with other crops. Wheat in the United States, that’s also been hit pretty bad with tariffs. They only get a couple cents per bushel. That’s not gonna put these people back on easy street, it’s not gonna help them feed their family. It’s not gonna help their farm survive and that’s what they’re now telling reporters. Even soybean farmers are saying that what the administration has offered and what they’re trying to do is not enough to fix what Trump broke. And that’s the important thing. Trump broke it and they know it. And while there are still plenty of them out there who say I’m willing to die for Donald Trump’s trade wars, more of them aren’t. More of them want to preserve their way of life. You know, fourth, fifth generation farmers, one day their kids are gonna take it over. This is their way of life. This is their culture. It’s the only thing they’ve ever known. It’s the only thing they want to know and they’ve made a pretty good life doing it. Until Trump came along. He single handedly destroyed so many small farms here in the United States, and when I say destroyed, past tense, it’s because yes, we have already had farms in the United States have to close their doors. Shut down because of this. They shut down before the bailouts came.

Even now with the bailouts, that’s gonna cost U.S. taxpayers 12 billion dollars, they’re telling us that it’s not good enough. It doesn’t do enough. It only helps one small group of people and to be honest most of that 12 billion dollars is probably gonna go to those conglomerates, excuse me, farms out there. You know, the ones owned by the big corporations. So it’s actually more of a corporate bailout then anything else. But let’s keep pretending that it’s gonna help the small mom and pop farmers out there, who hire four or five farmhands each year. Oh, but also don’t forget that we’ve cut back on the Visa Program from the federal government so they can’t even get their temporary seasonal foreign workers to come over here anymore, so even if things were working as normal and we didn’t have the trade wars, they still wouldn’t have enough workers to actually do the jobs on their farms.

So, yeah, American farmers are getting it from both angles here and they understand and hopefully will hold accountable the Trump Administration for doing this to them. Because every single ill that these people are facing right now comes from a policy put in place solely by Donald Trump and his administration.