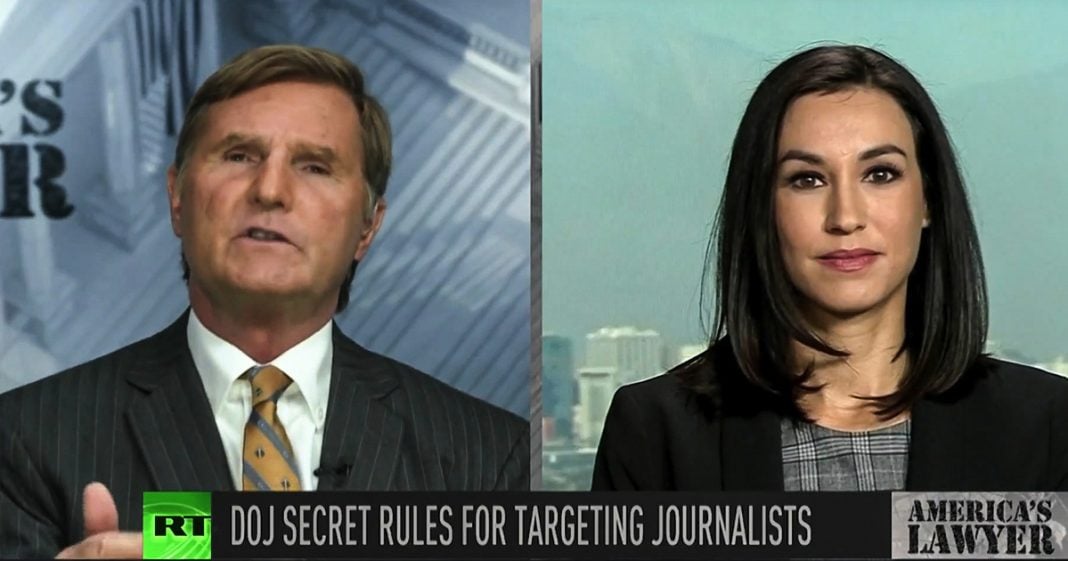 Via America’s Lawyer: Mike Papantonio is joined by Brigida Santos to discuss how the U.S. government can now monitor journalists under a foreign intelligence law that operates outside the traditional court system.

Mike Papantonio: According to newly released documents obtained under the Freedom of Information Act lawsuit, the US government can now monitor journalists under a foreign intelligence law that allows invasive spying that operates outside traditional court systems. Only in America right now, maybe huh? Joining us to talk about this is Brigida Santos. Brigida, FISA Court rules are entirely separate from the typical rules obtaining subpoenas and court orders and warrants. Tell me what’s been laid out here by the Justice Department and the media guidelines? What’s the difference in what we’re seeing in this new act?

Brigida Santos: Well the difference is that the Foreign Intelligence Surveillance Act allows high ranking Justice Department officials to approve applications, to monitor media outlets and members of the media who are believed to be agents of a foreign government, suspected of possessing foreign intelligence or even communicating with a person of interest in a criminal case, which might merely simply be a journalistic source or a leaker. Now monitoring can include the collection of a journalist’s communications content, emails, phone and financial records. Because FISA authorizations are approved through secret hearings, targeted journalists actually have no way of challenging the claims made against them, they’re also very unlikely to even know that they’re under surveillance because the DOJ does not have to notify them. Now, this is a departure from the media guidelines set in 2015 that state that the DOJ must notify journalists when their records are seized, however the problem with those guidelines is that they don’t actually apply to surveillance under FISA or the national security letters.

Mike Papantonio: So why did the Justice Department keep these rules secret? I mean, that’s a rhetorical question but it’s pretty evident they didn’t want this out there, they didn’t want journalists talking about the idea that we now have a special way that we can spy on journalists. So it’s everybody in the United States, it’s not just somebody working for Chinese television or Russian … it’s everybody isn’t it?

Brigida Santos: Yes it is and the reason is probably because the Obama administration was facing so much criticism at the time for how it treated whistleblowers and as you said, the government just doesn’t want Americans to know that it’s actually ramping up its assault on not only the first amendment and press freedom, but privacy as well. We have to remember that is was not just this war on press started by Trump and it won’t end with him. He’s picking up where previous administrations have left off and he’s going to pass the ball down the line to the next administration when he leaves office.

Mike Papantonio: Yeah, we’re going to get emails, “Oh Trump this and Trump that.” Yeah, Trump’s got his issues, this started all the way back with Obama. The other part of this and I know you know, you and I have done a story on this is that he also set up a … Obama set up an arm of what they call this propaganda office, where the US government actually spends money with journalists to produce propaganda, American propaganda right here in the United States. In other words, they might call the Washington Post, say, “We want you to do a propaganda piece.” That was started and funded, by the way, by Obama. It was done late at night, nobody knew about it, it was this hugely kept secret, just like this was and so the media didn’t even talk about that story and I’m really saying, they’re not talking about this story, very bothersome to me, but maybe they’ll catch on. If these rules can now be released to the public, why are the FBI’s very similar rules for targeting journalists with national security letters, why are they still being considered classified? Why would we say these are classified? People know about it now. What’s your take?

Brigida Santos: Well that’s because the DOJ’s rules for targeting journalists under FISA have only been exposed to the public as a result of this ongoing Freedom of Information Act lawsuit. So when it comes to the rules for surveilling journalists under the national security letters, there isn’t public information beyond some heavily redacted documents because they have not been made public through a lawsuit and maybe that’ll happen down the line.

These people who call themselves progressives, embracing the spook industry. How do you make Brennan a hero? Brennan was this cat that just years ago, we were calling him a war criminal but now progressives saying, “Oh he’s a great American hero.” He’s a great American hero because he doesn’t like Trump, because he speaks out against Trump. It’s almost as if progressives have forgotten how dangerous the spook industry can really be and the only way to remind them is go back and take a look at the Frank Church hearings, it will scare the bejeezus out of you. When you see that they actually had government operatives targeting … I mean literally physical injury, targeting American journalists.

So it’s amazing to me how that bit of history’s been lost. I want to ask you, how many times have the FISA court orders been used to target journalists as far as … that we know about?

Mike Papantonio: I want to do more stories on this, I want to talk about the whole Frank Church hearings and remind the American media how dangerous the spook industry really can be. Thanks for joining me.