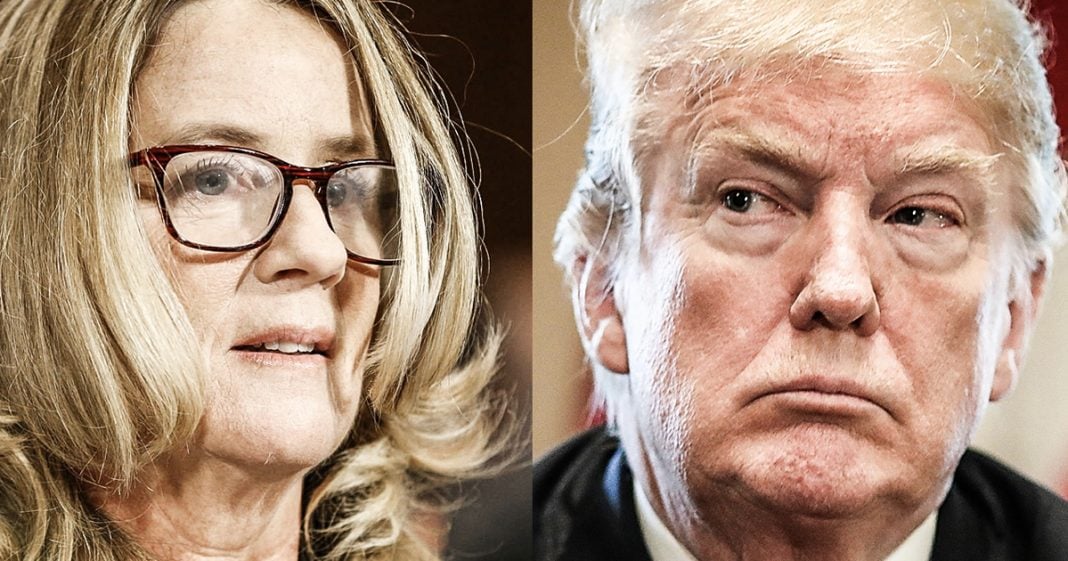 Sources in the White House confirmed to reporters that Donald Trump was losing his temper while watching Dr. Christine Blasey Ford testify before the Senate about what allegedly transpired years ago. Aides said that Trump was mad because Dr. Ford was credible, a sentiment that was also echoed on Fox News. Ring of Fire’s Farron Cousins discusses this.

While most of this country was watching Dr. Christine Ford’s testimony on Thursday, feeling compassion for her, feeling empathy for her and actually believing the things that she had to say, there was one person who wasn’t feeling any empathy. They were feeling rage, and no, not talking about Lindsey Graham there. The person I’m talking about is President Donald Trump.

According to aides inside the White House speaking to Vanity Fair’s Gabriel Sherman, Donal Trump was, quote, raging during Dr. Christine Ford’s testimony because he was so pissed off because she seemed credible. Trump was actually listening to this testimony thinking, “I could believe this. I think this woman might be telling the truth and, more importantly, other people think this woman is telling the truth because she has credibility,” and that made him angry.

You know who else said that Dr. Christine Ford’s testimony was very credible and was bad for Republicans? The people over at Fox News. Sure, not all of them, but a couple also admitted that, “Wow, she was really credible. She was very moving. We believed what she had to say.” Now, like the Republicans on the panel, it didn’t change their opinion of whether or not Kavanaugh should be sitting on the US Supreme Court, but at least they were all willing to admit that, “Yep, pretty obvious that this woman is telling the truth. Luckily, we’re Republicans, and we don’t care about sexual assault.”

In the case of Trump, if he thinks she is credible, kind of makes you wonder what he thinks about the 19 women who have accused him of sexual misconduct, because I’m willing to bet, not only does he think they’re credible, he also has to know that they’re credible. I mean this guy knows what he’s done to these women in the past. He knows that these accusations are true, just like he understood they were true against Brett Kavanaugh.

The Senate decided that they were going to side with Kavanaugh, which is exactly what Trump wanted, so no matter how mad he got yesterday during her testimony, no matter how angry he was shouting at his television, none of it mattered because the people who were in a position of power, even if they believed Dr. Christine Ford, once again, chose to put their party over the country.