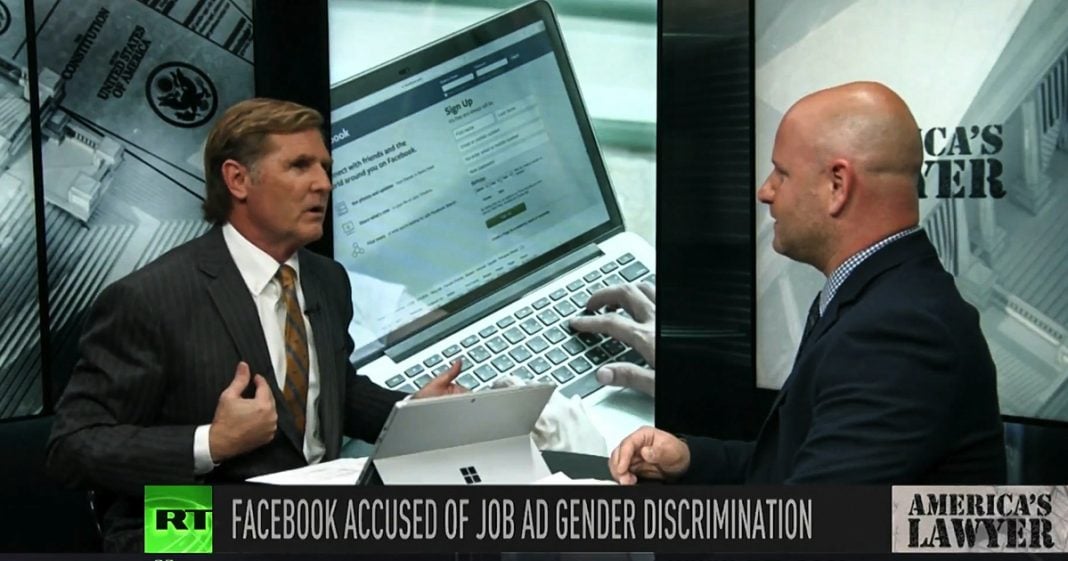 Via America’s Lawyer: Facebook is once again facing accusations of discrimination as investigations show that the company is allowing job posters to exclude women from saying there’s job openings. Mike Papantonio and Farron Cousins discuss.

Mike Papantonio: Facebook is once again facing accusations of discrimination as investigations show that the company is allowing job posters to exclude women from saying there’s job openings.

This is not a new thing. The heart of it is whether or not they could be considered an employment agency. Isn’t that how you look at it?

Farron Cousins: It is, and that’s the legal question they’re facing right now. First and foremost, they 100% should be, but I think, not to necessarily defend Facebook because what they’re doing here is pretty bad, but you have a bunch of computer folks. They got together, created Facebook, and then it kept evolving. They didn’t understand what it was evolving into, what they had created, and they kept saying, “Yeah, okay. Let’s let people post jobs. Let them post ads,” and it’s under that banner that these jobs get posted as advertisements.

Yes, you can target ads if you only want them going to a certain group of people because that’s what your product is based on. That’s understandable, that’s targeted advertisement. But when you use it as employer’s have started doing to say, “We don’t want women, so this can only go to men. We don’t want African Americans, so it only goes to white folk. We don’t want people over the age of 50,” which is another thing they’re currently being sued for.

Mike Papantonio: Race and age, already they’re being sued for. Now we find a gender case where women are saying, “Wait a second. Why would you make the decision that I don’t want to do construction work?” There’s plenty of women that do construction work, plenty of women that do labor, all types of labor. For them to make this decision and I’ll tell you what’s no defense. Here’s the no defense. No defense is because the people who hired us told us to do this. That’s no defense.

The second part of this case, if Facebook were coming to town and they were setting up as just a regular employment agency, there’s a lot of hoops they have to jump through. Chances are Facebook hasn’t jumped through these hoops and they’re doing this nationally.

The other part of it every state has its unique laws where it comes to the employment process. Every state does, and to say that Facebook has dealt with all that, with just this massive organization that is truthfully a Facebook employment agency, is slim to none.

Farron Cousins: It’s because again, they let it go wild. They just let it evolve so much. They didn’t look into what are the laws, if we do become a Facebook employment agencies, and keep in mind they change from state, to state, to state, and they didn’t bother to do any of the background work. They don’t necessarily have the best legal team advising them before they get into trouble. That’s why we’re constantly seeing these new stories, age discrimination, racial discrimination, gender discrimination, facial recognition, the hacking, stealing your data, selling it to third parties because they didn’t plan on this and they let it grow too big under their own feet.

Mike Papantonio: Farron, thank you for joining me. As usual, the stories every week get a little stranger, almost every week.