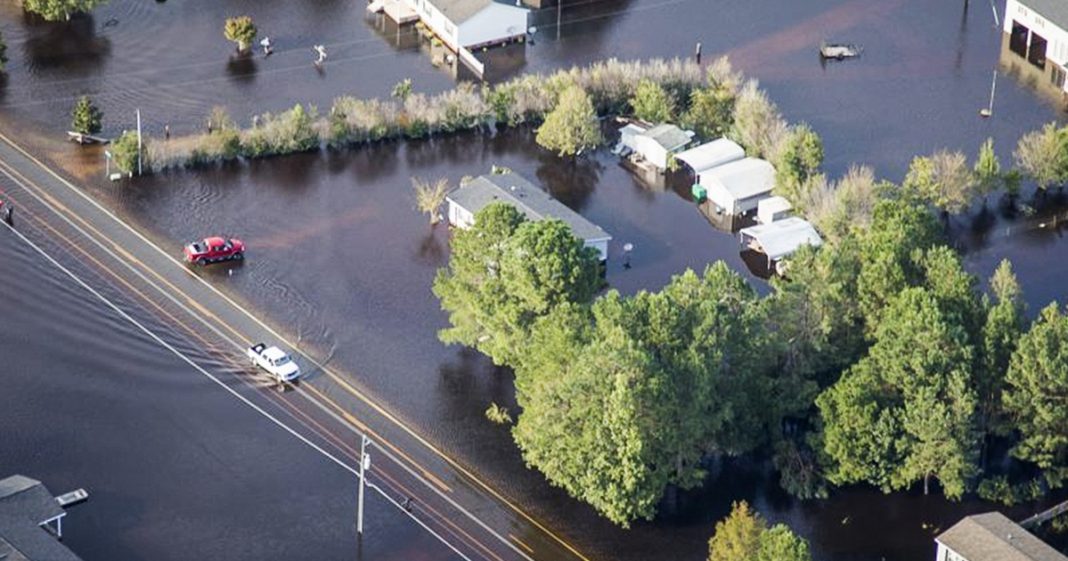 It is easy to forget about the plight of the Carolinas with all of the insanity taking place in Washington, D.C., but for the people who were impacted by Hurricane Florence, that’s all that matters right now. And while we weren’t paying attention, the EPA was testing flood waters and found that many areas are being impacted by potentially deadly corporate toxins that have leached into the flood waters, threatening the health of everyone in their way. Ring of Fire’s Farron Cousins discusses this.

Well it’s been easy to forget about the fact that the Carolinas are still partially underwater from Hurricane Florence. Most of the reason we’ve forgotten about that is because of all of the insanity taking place in Washington, DC with the Brett Kavanaugh confirmation, but we have to understand that we have a major portion of the United States right underwater.

The story is so much worse than anything the media has been talking about. This week the EPA had to start evacuating multiple families from their homes in South Carolina because it turns out that the floodwater that went into their home was contaminated with cancer causing chemicals. Cancer causing chemicals, by the way, that came from industrial pollution.

There were multiple, I think there were actually 70 according to Kyla Mandel, writing for ThinkProgress, 70 Superfund sites in the direct path of Hurricane Florence. Now a lot of those where you just have all of this cancer causing corporate toxins, a soup basically of deadly chemicals for human beings, got filled up with floodwater, and then it just became part of the floodwater. That’s why the EPA is finding this stuff in people’s homes.

We have coal ash ponds which is also a highly toxic substance that rose up with the floodwaters and became a part of it, spreading those toxins all around the communities, letting it seep into the soils, down into the aquifers so that it’s going to come out when people turn on their sprinklers to water their lawns.

For years and years and years this stuff is going to contaminate those areas because this particular part of the country happened to be so polluted and so filled with those corporate toxic Superfund sites.

The worse part is nobody’s talking about it. I mean at least, even with as dysfunctional as the EPA is today, at least they were out there doing their job in this one instance, testing these homes and immediately getting these people out, telling them, “Listen, we’re going to have to put you up somewhere else. You cannot be in your home.”

These chemicals in most cases, PCB’s which are Polychlorinated Biphenyls, they are cancer causing chemicals. They said, “Listen, these chemicals are in too large a concentration in your house. You got to get out. We’ll take care of the arrangements, the accommodations. We’re going to pay for it, but get out of your house before you and your family are in serious danger.”

Kudos to the EPA for finally doing their job here, but the big question remains with all the budget cuts that have taken place at the EPA, all the staff members that have been let go or quit because of Donald Trump, are there enough people to go out there and test all the homes? Are they testing all the floodwaters? Are they testing these ponds and these Superfund sites that leaked out there.

Probably not, and they need to be. American lives are at stake with this, and unfortunately, due to the latency of some of these chemicals, people may not develop these disgusting horrible deadly diseases for another five, ten, maybe even 15 or 20 years. The reason these diseases will develop is because we, as a country, have done such a poor job of reining in corporate pollution that we just let it sit there in these Superfund sites and these coal ash ponds just waiting for the next natural disaster to spread those all over the local communities. That is exactly what has happened in the wake of Hurricane Florence.