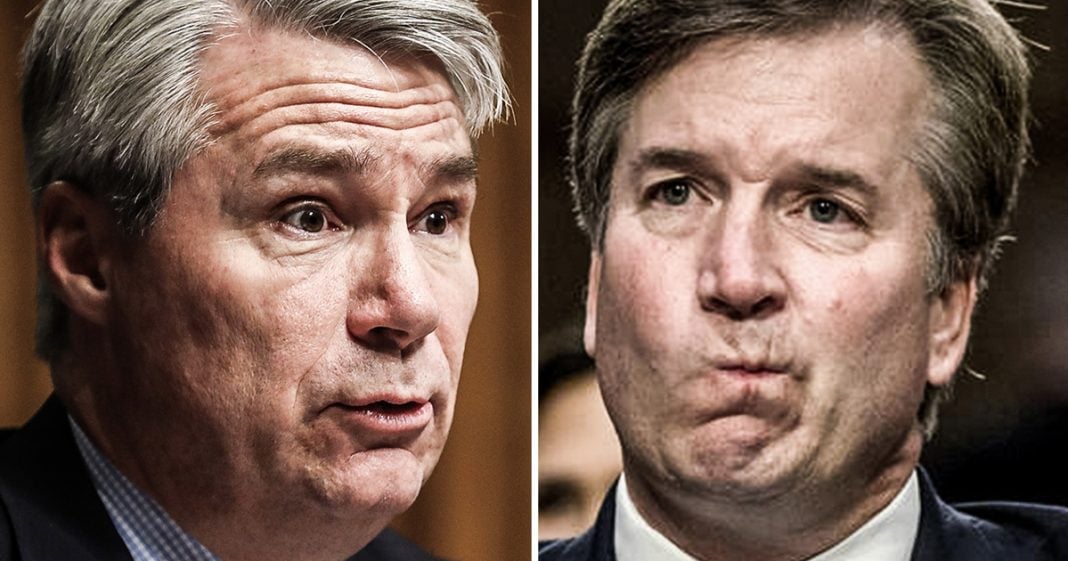 There is nothing shocking anymore, but this story certainly comes close. During his testimony, Judge Brett Kavanaugh was asked about the “Devil’s Triangle,” which was something he and his friends had discussed back in school. Kavanaugh took a moment to answer the question, but eventually said that it was a “drinking game” played with quarters. The truth is that it is a euphemism for a threesome. In order to back up Kavanaugh’s claim, a computer located inside the House of Representatives offices immediately edited the Wikipedia page for “Devil’s Triangle” to get it to match Kavanaugh’s description. Ring of Fire’s Farron Cousins discusses this.

During the hearing yesterday at the Senate Judiciary Committee with Brett Kavanaugh, Americans learned a lot of new words and phrases, words and phrases that most of them didn’t want to know anything about. Words such as boof and boofing. Phrases like Devil’s Triangle.

Now, when Democratic Senator Sheldon Whitehouse asked Brett Kavanaugh what the Devil’s Triangle was because that was something that Kavanaugh and his buddies had joked about back in school, Kavanaugh actually took way too long to respond, sitting back kind of thinking of what would be a good answer because he knew the truth of what it was. He leans forward. This is exactly … Because I’m not ever going to forget what happened here. He’s asked, “What is Devil’s Triangle?” And he goes, “Drinking game.”

Senator Sheldon Whitehouse asked him, “Okay. Well, what kind of drinking game?” Again, took him another few moments. He’s like, “Have you ever played Quarters?” Senator Whitehouse says, “No.” And he goes, “It’s played with quarters.” Waiting for Senator Whitehouse to be like, “I don’t know what that is either.” “Oh, well, it’s like that then.”

This man lied through his teeth about what the Devil’s Triangle is and everybody saw it. I don’t think even the Republicans on that panel were able to watch him do that and think, “Well, this guy’s being super honest right now. Right?” No. Body language experts, psychologists, sociologists have all come out and said that his reaction there was 100% not true.

So the Congressional Edits people found an IP address, traced it back to the U.S. House of Representatives, and they made this edit to the Devil’s Triangle Wikipedia page. It says, “A popular drinking game enjoyed by friends of Judge Brett Kavanaugh.” Now, based on what they said there, we actually don’t know if it was a Democratic staffer or Republican staffer. Maybe they were covering for him. Maybe they were mocking him. But nonetheless, this entry was put in there to try to reflect, in case anybody wanted to look it up, that this was, in fact, Brett Kavanaugh’s correct answer, which it wasn’t.