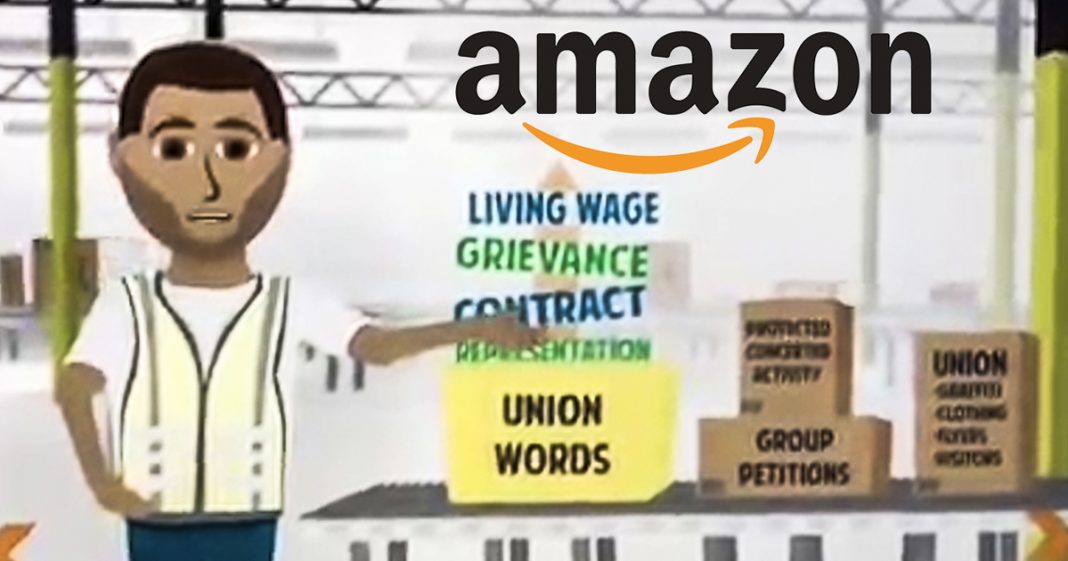 Following in the footsteps of companies like Lowes, Target, and Walmart, Amazon has produced their own, in-house anti-union video for managers at the company, complete with a list of words and phrases that they need to look out for if they hear their employees mention them. This is disgusting propaganda from one of the wealthiest companies in the world, and the workers at these warehouses need to understand that they are being lied to. Ring of Fire’s Farron Cousins discusses this.

Amazon is following in the footsteps of other major retailers here in the United States, retailers like Target, and Walmart, and Lowe’s and Home Depot, and they have put out their own anti-union video for managers within their company, complete with lists of words that these managers need to be on the lookout because these are indicative of union formations throughout the company. Part of this propaganda video has been leaked. The quality is a little poor because it was filmed by someone at Amazon on their phone while watching it on the computer, but this was the only way they could get it to the public. So, forgive the quality but here is a short clip from this anti-union Amazon video.

Training Video:
Asserted activity, such as an associate reporting to speak on behalf of his or her coworkers in raising concerns, union graffiti, union tee-shirts, hats, jackets or other clothing, union fliers and union visitors in or near the parking lot. Some signs are less obvious than finding the actual union flier, but they can indicate associate disengagement, which is itself a warning sign for potential organizing. These are signs that must be monitored very closely and should be escalated to employee relations. Examples include, associates who normally aren’t connected to each other suddenly hanging out together, associates who are close suddenly stop speaking to each other, groups of associates scatter when approached by management.

So, Jeff Bezos, Bezos whatever you … however you say it, the CEO of Amazon is worth 155 billion dollars, making about 260 million dollars every single day, and that’s not enough for him. That’s not enough for Amazon. They still wanna make sure that their workers do not attempt to unionize, that they don’t say phrases like, “living wage,” because that’s a major red flag. Oh, god, living wages? Get that person out of here.

The video also says that we’re not anti-union, but we’re certainly not neutral either. No, you’re anti-union. When you’re putting out and producing propaganda videos talking about the ills and evils of unions, that makes you anti-union.

Here’s the thing, and these are statistics that republicans and these anti-union corporations don’t want you to know about, unions typically raise the wages of workers, typically in the past, by about 40%. Surrounding businesses that aren’t even affiliated with the unionized one, they also see their wages go up too. So, union formation does not just increase the wages of the one corporation that unionizes. It increases the wages all over the community because other companies have to raise their wages to compete, or else their employees are gonna go try to get a job over here.

Unions help everyone, not just the members, not just the ones paying dues and not just the ones at the same company, and that’s why we have seen such a fervent anti-union push in this country for the last 40 years. They wanna put an end to that. They wanna put an end to the minimum wage all together and be able to pay us as little as humanly possible, which is exactly what Amazon’s doing. They’re paying their employees such low wages for working 10 to 12 hours a day, with no breaks. They’re having to pee in water bottles. Paying them so low of a wage that even with their full-time job they still have to rely on government assistance.

And that’s why Bernie Sanders and Ro Khanna have introduced this legislation that would force these multi-billion dollar companies, like Amazon, to have to pay the Federal Government back when their employees are paid so little they have to get federal assistance. It’s not meant to shame the workers. It’s meant to shame these greedy CEOs like Jeff Bezos. Because this man, worth 155 billion dollars, making 260 million dollars a day can’t even afford to pay his employees a living wage, or at least that’s what he wants us to think with this little anti-union video.