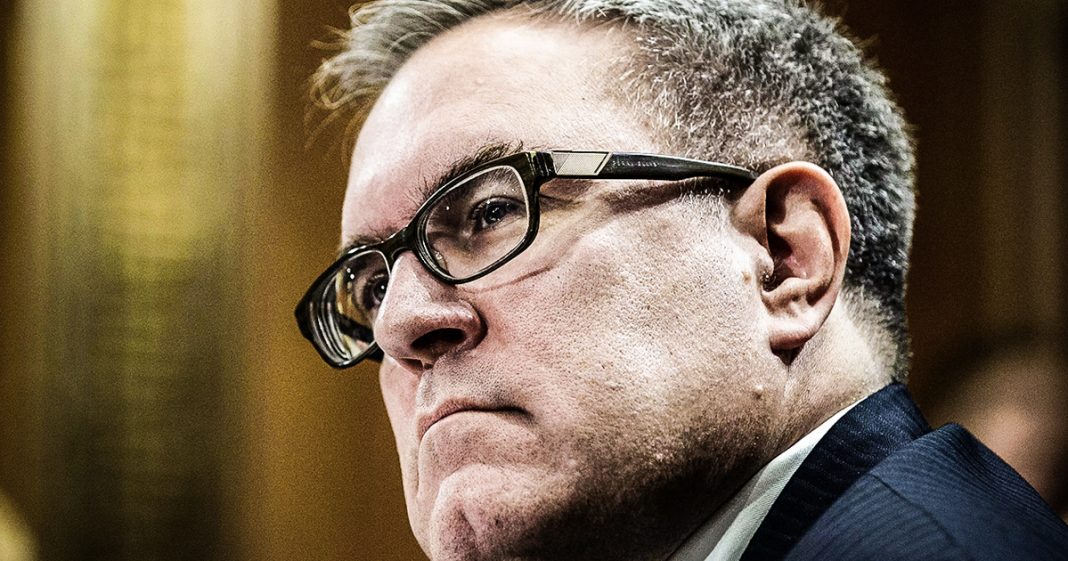 The Trump administration is trying to make it crystal clear that they don’t care one bit about the health of children in the United States. The EPA, under acting director Andrew Wheeler, has put the head of the department’s Office of Children’s Health Protection on administrative leave without any explanation, meaning that the department that overseas children’s health is without a leader and without direction. Ring of Fire’s Farron Cousins explains what this could do to the program.

If you have children or if you are thinking about having children during the Trump Administration, there’s one thing you need to understand, and that is, Donald Trump and his entire administration do not give a damn about the health of your child.

Now, we’ve seen that with policies that basically began as soon as this administration was sworn in, but just this week, children’s health was dealt yet another blown by the Trump Administration. Andrew Wheeler, the acting director of the Environmental Protection Agency, the guy who replaced Scott Pruitt, also happens to be a former coal lobbyist, we found out that he has suspended, indefinitely, placed her on administrative leave, the director of the Office of Children’s Health Protection.

The woman who is in charge at the EPA of making sure that our children are healthy and safe from toxic chemicals from corporations. Just put her on administrative leave, didn’t give a reason, just said, “Alright, you can go home and don’t come back for quite a while, until I tell you to.”

The woman is Dr. Ruth Etzel, she is an award-winning pediatrician who spent her entire adult life treating children, working on children’s health issues, and they’ve basically just said, “Your services are not needed at the moment. We’re no firing you, but we certainly don’t want you working on keeping American Children safe.”

Speaking with current EPA staffers and members of the EPA, news outlets are reporting that this is part of a broader plan by the Trump Administration because they wanna get rid of that office altogether, the Office of Children’s Health Protection. They don’t want it to exist. They don’t want an office dedicated to the protection of children’s health!

We really are dealing with a level of cartoon villainy that we have never seen from within the federal government itself. There is no justification whatsoever as to why we need to get rid of this office. This isn’t something that could be more effectively run by a different group. It is something that squarely falls within the authority of the Environmental Protection Agency. There is no reason to cripple it by sending the director on administrative leave and then attempting to dismantle the entire organization.

The only reason you would do that is because you want corporations to be able to get away with anything. When they dump their toxins in our rivers and our aquifers, when they spew them out into the air, they don’t want anybody testing those to see if, hey, maybe this is going to ruin children’s brains. Maybe this is going to give them more asthma attacks.

And I bring up those two issues because this administration has already repealed rules from the Obama Administration that they have admitted are going to really screw up children here in the United States. We’re looking at well-over 100,000 additional asthma attacks in youth, thanks to their repealing of rules about what can be spewed into the air from corporations.