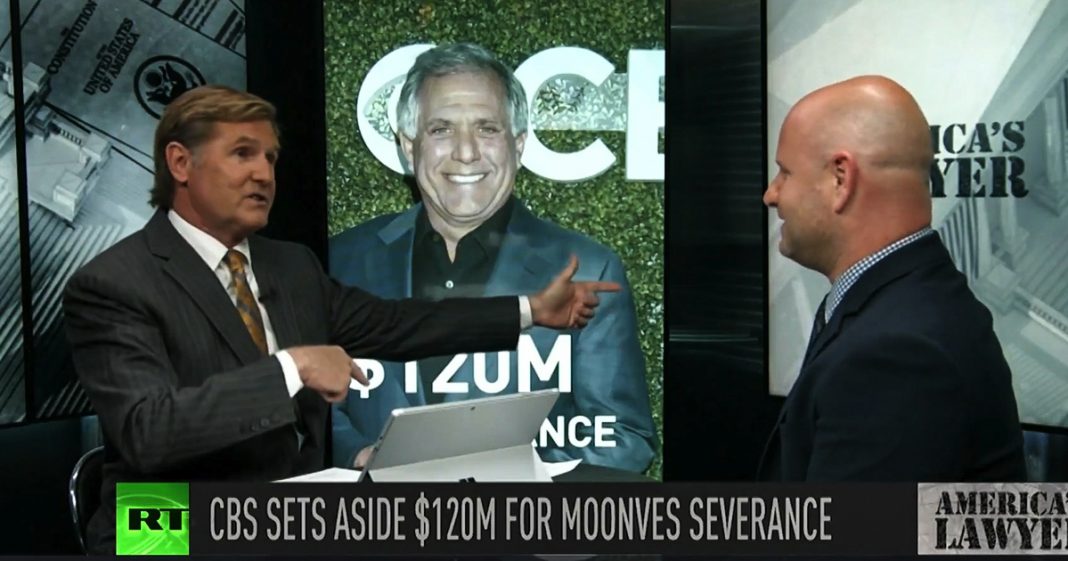 Via America’s Lawyer: Les Moonves, the chief executive of CBS, has been forced out of the company over sexual misconduct claims. But thanks to his contract, he might be getting a $120 million golden parachute. Mike Papantonio is joined by Farron Cousins to discuss.

Mike Papantonio: Les Moonves, the chief executive of CBS, has been forced out of the company over sexual misconduct claims. But thanks to his contract, he might be getting $120 million golden parachute out of the deal after assaulting all of these women. What a deal. Work for CBS. There’s no rules, really. What is your take on this? My take is he’s not going to get the 120. He’s going to be sued in a shareholder derivative case and everybody on the board is going to be a target.

Farron Cousins: Well, here’s the thing. He’s probably going to get the money at first, but then that money’s probably going to be taken away in the form of that lawsuit. But here’s the thing. All right. You got 12 credible women who have given evidence that this man assaulted them. Then on top of that, not only was he assaulting, he was also helping cover up the assault of people like Charlie Rose, Fager, with the organization. You had this culture coming from the top here with Moonves. He cultivated it, he expanded it.

Farron Cousins: He was right at the dead center of it.

Mike Papantonio: Now, you’re hitting the point. This gets even uglier. Okay. Moonves puts his board of directors together. That’s how that works. After he gets caught, after it’s very clear that he’s a freak predator, that’s what the guy is, he’s a freakish predator, after they find that out, the board starts resigning. Even more interesting. They hire a lawyer. Now, follow this story. They hire a lawyer to look into all of this, okay? The law firm is also hired by Moonves when he’s in charge as CEO. This is what’s reported to the lawyer. The lawyer is told, “Yes, we took reports. It was very clear.” The lawyer is told, fact after fact, that clearly showed that this man had done some awful things, right? Then he goes to the board and he’s asked, “Would you give us a report?” He covers it all up. He doesn’t mention anything about all the ugly stories that the police told him, that accusers told him while he was supposed to be this lawyer doing the investigation. I think this guy might have some … I think he may have some liability as a lawyer. I hope he does. I hope that he does because I think that’s where this is going to go.

But at the end of all this, I think what we’re going to find is a stockholder, shareholder derivative suit is going to close all this down. What’s your take?

Farron Cousins: Right. In fact, we already have clients signing up for those lawsuits right now, which is great for them, but Moonves is essentially a … He’s a smaller version of Weinstein. That’s the kind he was running. He doing basically the same kind of sexual predator scheme that Weinstein was carrying out. “Oh, you want a job at my network? Well, how bad do you want a job at my network? Come meet me in my office. Come meet me at this hotel.” That’s the kind of behavior that Moonves was engaging in, trying to exchange any kind of activities here.

Mike Papantonio: Yeah. The worst thing is, he’s lying in the face of overwhelming fact.

Mike Papantonio: First of all, you have an agent that says, “Look, I know what you did. You tried to assault this actress that I sent by, and you actually did assault her.” The lawyer doing the investigation is told that directly and the lawyer covers it up, doesn’t share it with the board of directors. That may be the only defense that the board of directors has when they get sued in a shareholder derivative. This guy’s made $650 million working at CBS. $650 million. Probably a job most people could do, but it’s just being at the right place at the right time.