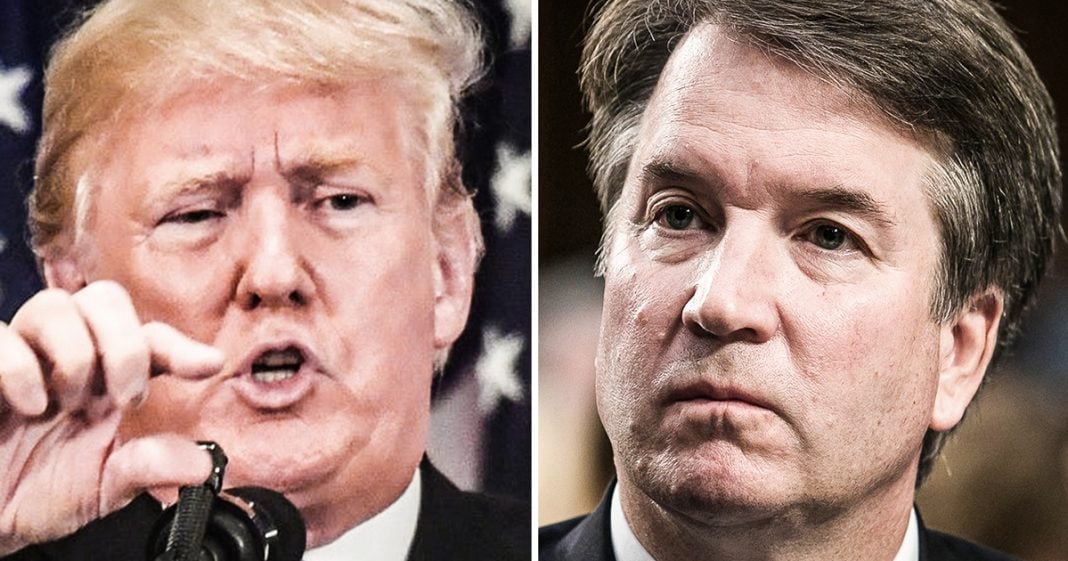 The Republicans have been so desperate to steal yet another Supreme Court seat that they failed to understand the damage that forcing a flawed candidate into that seat could do to their Party. According to the latest round of polling, Republican women are increasingly abandoning the Party over their treatment of women, and that is the result of both Donald Trump’s behavior and rhetoric, as well as Republican Senators’ willingness to pretend that Kavanaugh isn’t a disgusting human being. Ring of Fire’s Farron Cousins discusses this.

If there is any kind of positive outcome, which I know is weird to say, from all of this Brett Kavanaugh drama that’s been happening. All the women who have come out and accused him of sexual assault, yet Republicans insisting that he be nominated and confirmed for the U.S. Supreme Court in spite of his torrid history. The only good thing to come out of this is the fact that women, according to the latest polls, are starting to see exactly what the Republican party is. It’s a party of white males by white males for white males. That is why the latest rounds of polling show double digit decreases in the amount of support that Republican women have for their own party. With Brett Kavanaugh alone, in the last week, support for him fell by 18 points among Republican women. Support for Donald Trump among Republican women has fallen by 19 points in the last week and a half. We’re almost at 20%, a 20% drop in support among Republican women.

Let’s not forget that white women here in the United States voted, the majority of them, for Donald Trump. They thought he was a decent enough guy in spite of the Access Hollywood tape, in spite of all the sexual misconduct allegations against him. Maybe they thought at the time it was a one off thing, or maybe something he had done earlier in his life and he’s moved on. He’s not that kind of guy anymore. But after a year and a half of watching this guy in office, watching him consistently side with the accused without ever once giving accusers the benefit of the doubt and instead attacking them, I think Republican women are starting to wake up and understand what this man and his entire party are all about.

It is not a party that has any space whatsoever for women in the United States. They don’t care about your health. They don’t care about your bodies. They only care about the parts they’re allowed to regulated, and they certainly don’t care about consent. I know there’s still plenty of Republican women out there who are going to defend the Republican party til death. They have come out publicly and said, “Oh, even if Kavanaugh did this, all boys do this. So it’s okay.” They said that being groped by men isn’t that big of a deal. Girls should just get used to it. So yeah, you’re never going to change that psychotic mindset because that’s what it is. That is truly a psychosis among some of these Republican women.

But the ones out there who are still independent thinkers, the ones who understand that this is not the way the country is supposed to work, these are not the words the president’s supposed to say, this is not the kind of behavior we should be seeing from our elected officials or from someone who wants to be on the Supreme Court, they’re waking up. They’re realizing that we can do better as a country. We can do better for our daughters. We can do better for our sons. We sure as hell can demand better from the people that we send to Washington DC. With only a few weeks to go before the midterms, this is a really, really bad time for the Republican party to be losing 20% of their women. But hopefully this isn’t just a one off. I’m hoping that this is a permanent seat change with some of these people because these women need to understand because we’ve been watching it for decades now. The Republican party, as it stands right now, is never going to care about women. They’re always going to think they’re beneath them, and they’re always going to rule in a way that shows that.

The only way for you to keep your voice heard and your voice in a position where it matters is to vote these old, aging white guys who hate women out of office. But, luckily, you have a chance to do that in just a few weeks.