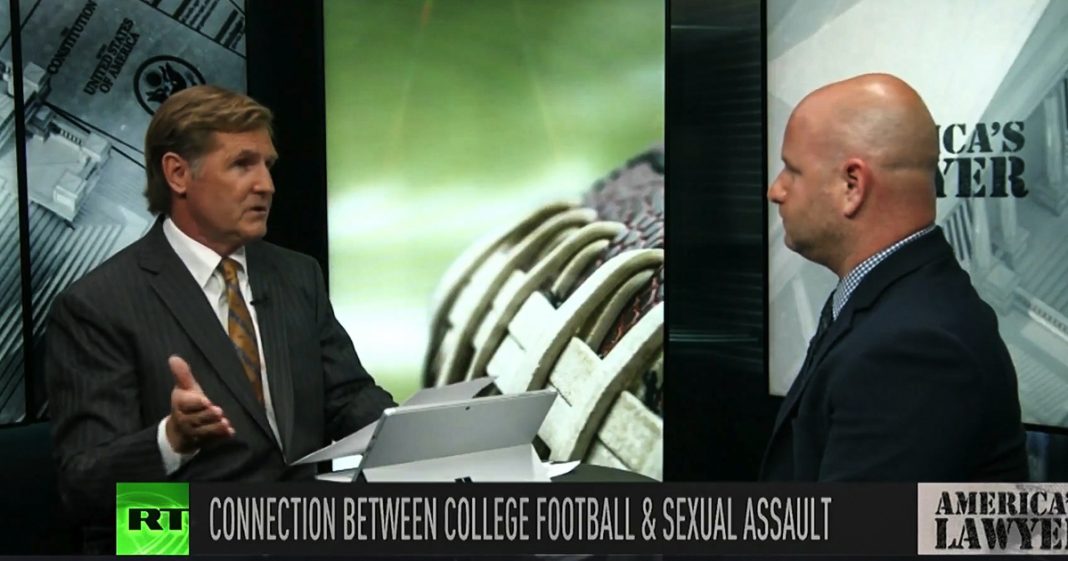 Via America’s Lawyer: Mike Papantonio and Trial Magazine Executive Editor Farron Cousins discuss how Sexual assault on college campuses is becoming a very serious safety threat, and with more colleges moving to keep these incidents secret, women are finding themselves with nowhere to turn to report abuse.

Mike Papantonio: New studies have shown that sexual assault on college campuses increases dramatically on game day, with some large universities reporting as much as a 45% increase in reported assaults on the days that home football games are taking place. Farron, you know I read and reread this story. It’s from the conversation.

What I liked about what they did in the story is they didn’t just take our word for it. They actually did a study of 96 Division I football organizations and campuses to figure out what’s going on on game day, and the numbers are startling. Where there’s a game day, there’s a 45% increase if you add to that where it comes to sexual assault, when you have an upset where the home team has an upset, they win an upset, it gets even worse. What’s your take on this? This is crazy. This is a crazy story.

Farron Cousins: This absolutely is. I mean, we’re talking about something, you know assault on college campuses or among college students, this really has hit an epidemic level at this point. Even on days when there’s an away game, you know during football season, still an 11% increase in reported sexual assaults on that particular campus. And I mean, when we’re talking about some of these schools, these are schools where you do have 10s of 1000s of kids enrolled. And to have a 45% increase, you know hundreds of assaults reported to police the next day from the students at these universities, you’re looking at real liability here on behalf of the universities.

Mike Papantonio: That’s where I’m headed with this.

Mike Papantonio: Here’s where this goes: okay, college football is a $10 billion money maker for-

Farron Cousins: But we can’t afford to pay the athletes.

Mike Papantonio: We can’t pay the athletes, we can’t, you know, NCAA has to keep … But it’s a $10 billion dollar proposition. Okay. When this happens, what’s going to end up happening ultimately, once you start assembling statistics like this, there’s no guess work. Somebody takes the statistics, somebody then actually has the right case, at the right time, with these statistics, where the university has already been put on notice. The notice is there’s a trend, and you need to know this about you’re university.

They’re actually looking at 96 campuses. So, let’s look at a lawsuit. One of them is campus A. Campus A has a series of assaults. One in five women are assaulted sexually on a campus in general. That increased 45% when a home game takes place. Add to that, home game with an upset. The statistics are there. And so, you’re gonna have a university that doesn’t do anything about it, they’re put on notice about it. They don’t do anything about it. And believe it or not, there’s gonna be a jury that’s outraged because it’s gonna be an awful fact situation, we’ve seen it time and time again. The right fact situation, with the right university, in the right place, and the right jury. This has potential to really bite somebody, don’t you think?

Farron Cousins: Absolutely. And the bigger issue here too is that these colleges, a lot of them, they already know this is happening. And that’s why they set up these, you know, sexual assault committees on their campuses made up of a couple directors from the college. And so, instead of reporting it to police, they say, “Hey. You have to come report it to the committee. We will handle it. First, before we handle it, could you just sign this non-disclosure form so that it doesn’t get in our statistics and deter people from coming to our college.” But then they do nothing with it.

They don’t investigate it, they say, “Well look. You had a drink or too as well, so we’re really sorry. But this is probably you forgot you told him yes.”

Mike Papantonio: Let’s play this out a little bit. We’ve got about a little less than a minute. An event takes place, but before the event takes place, we know the university has these statistics. These are viable statistics. This wasn’t just guess work. This was done with a statistical analysis that probably would hold up in court. So they’re put on notice to the problem, they then have two or three problems after they’re put on notice on game day. Ultimately, they become a target. I’m telling you, somebody needs to pay attention to this if you’re at a university, and you know these statistics.

Interesting thing is, this is only the leading edge. There are more studies being done and game day rape is gonna be a term we start hearing in the future.