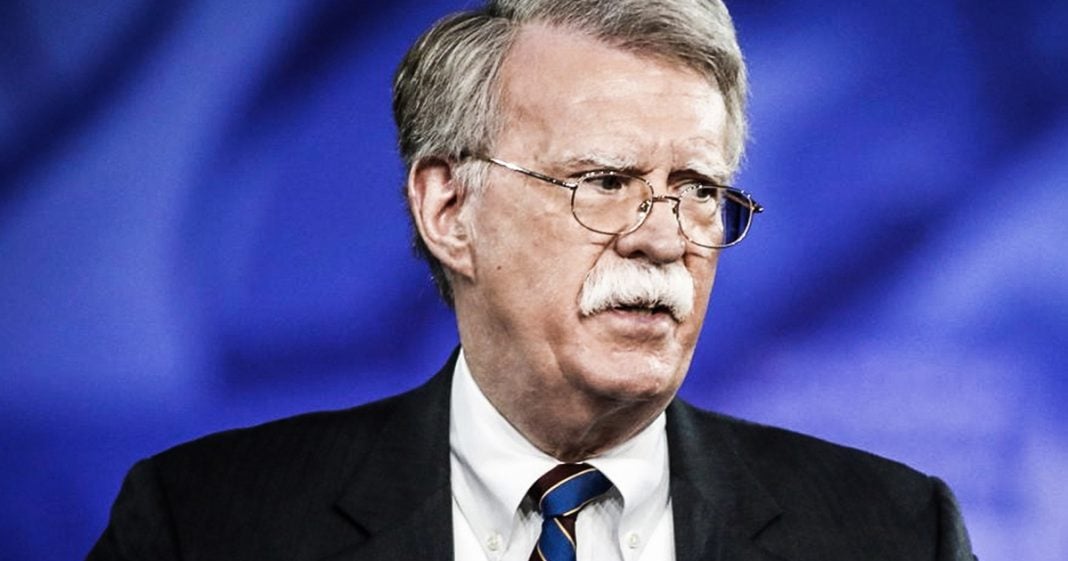 Donald Trump’s National Security Adviser John Bolton delivered a speech this week that left little doubt about the administration’s plans to invade Iran. During his speech, Bolton said that the US is watching the country and that we are prepared to “act” if necessary. He didn’t lay out exactly what the country was doing that was worthy of starting another US war, but that hasn’t stopped Bolton in the past. Ring of Fire’s Farron Cousins discusses this.

Many months ago, when Donald Trump announced that John Bolton was gonna come in and be his new National Security Advisor, a lot of us already figured what would happen. We assumed that probably within the next few months, maybe within the next year, we would start another unwinnable war in the Middle East. This week, John Bolton made it clear that that is 100% his intention. While Donald Trump was over there chairing the UN Security Council meeting, talking about how evil Iran is and how big of a brain China thinks he has, which actually is something he said, John Bolton was giving a separate speech to a bunch of anti-Iran groups. Here’s what John Bolton said during that meeting.

“The United States is not naïve. We will not be duped, cheated, or intimidated. The days of impunity for Tehran and its enablers are over. The murderous regime and its supporters will face significant consequences if they do not change their behavior. Let my message today be clear. We are watching and we will come after you.”

Now, to me those sound like the words of a man who is encouraging his boss to go to war with another Middle Eastern country, based on really not too much. I mean, Bolton didn’t give us too much information there. From what we knew about the Iran agreement that Donald Trump pulled us out of, Iran was complying. They were doing what they were supposed to. It was us, the United States, we weren’t doing our part of it. The UN told us not to back out of the agreement. European countries told us not to back out of the agreement, but Trump knows best, right? He’s the guy who said, “Nope. We’re not gonna do it,” and then he gets pissy when Iran, now that we’re not even a part of it, might be doing things that they don’t like. Yeah, well you lost your say in the matter when you decided to pull out of that agreement, and I guarantee you, you’re not gonna find another country in the world, at least one of our allies, that wants to go to war with them.

Sure, you could probably make friends with another hostile nation that wants to overthrow Iran, but they’re not gonna be our friends, and they’re sure as hell not gonna do it the way we want to do it. They’re not gonna leave anything for the United States to walk away with, probably including our own soldiers that we send there. War with Iran is absolutely a horrendous possibility, but unfortunately at this point, it’s a very real possibility because Donald Trump has surrounded himself with some of the same war hawks that George W. Bush surrounded himself with, particularly John Bolton. Bolton has never met a country that he doesn’t want to bomb, and Iran is right now at the top of his list.

Because that’s the thing here. There used to be a time in the United States where if we went to war, it’s because either we were attacked or our very close allies were attacked. You look at World War II and all the atrocities taking place. It still took us a long time to get involved with that, even though we knew what was happening. But now, we’re just ready to go to war with anybody and everybody, based on flimsy evidence and hearsay and conjecture. Oh, we think you may have done this thing, we’re coming to bomb you. We’re not even gonna try diplomacy. We’re not gonna try to talk to you. We’re not gonna try sanctions. We’re just gonna come over, kill every last one of you, and hope that that solves the problem, which it never does. That’s what we’re doing today because that’s what John Bolton wants this country to do.