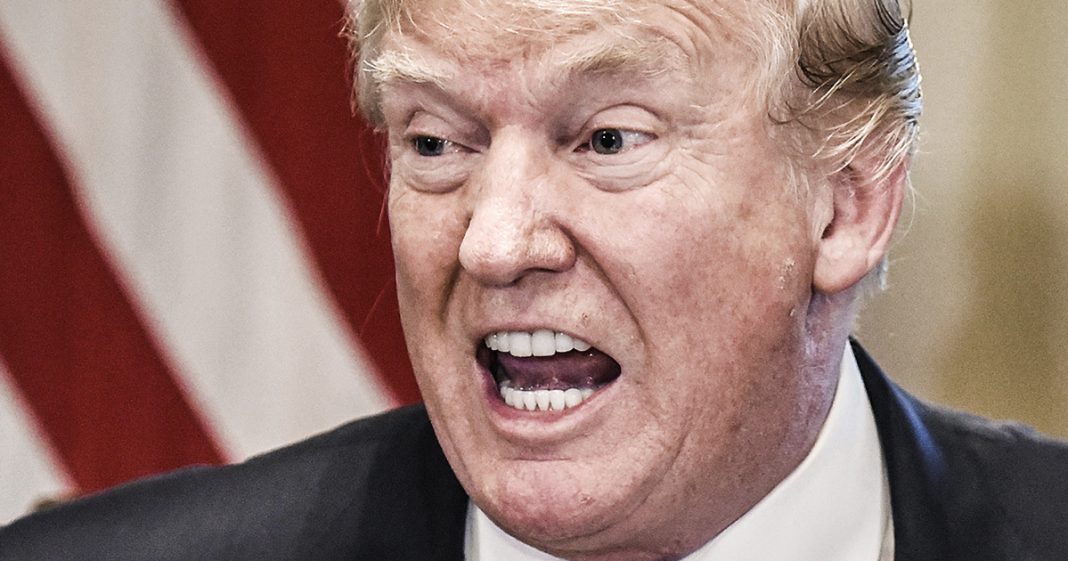 If you needed any more proof that the only thing Trump cares about in this world is money, then consider this new report in The Guardian detailing an intense interaction between Donald Trump and members of his transition team. According to the report, Trump flew off the handle in 2016 when he learned that HE would have to be the one to finance his transition into the White House with his campaign funds. Trump allegedly screamed at his aides saying “I don’t care about the law, you’re stealing my money!” when he learned that HE had to pay. Ring of Fire’s Farron Cousins discusses this.

In case you were wondering, or maybe you needed a little bit more evidence to show you that the only thing that Donald Trump cares about in the world is money, then you need to pay attention to this new story by Michael Lewis in The Guardian.

According to a story Lewis wrote, and this was actually told to him by Chris Christie, who happened to be one of the people in charge of Donald Trump’s transition team, the President absolutely flew off the handle, screaming at his aides when they told him that he was going to pay for his own transition team, but that he could do so out of a campaign fund set up to pay for that.

Chris Christie told the President this back in April 2016. One of the times when Chris Christie said, “Hey, if you win, you’re going to have to pay for this, so we need to set up the fund now, so we can raise money for it,” blah, blah, blah, “Then you’re all set, so it doesn’t have to come out of your pocket.” President says, “Okay.”

Then August, September 2016 rolls around, the fund has some money, everything’s going fine, Trump then wins the election in November. Then when they’re trying to use that money, according to Chris Christie who’s part of the team to pay for the transition staff, Trump flew off the handle. He absolutely lost his mind, began screaming at Chris Christie and Steve Bannon, members of the transition team. He yelled at them that they were stealing his money because they had to use that fund to pay for the transition, which they had warned him about repeatedly and told him that’s why that fund was ever set up. But Trump wouldn’t have it. He thought that was his fund money, that was his play money. He was going to put that back in his bank account and get even richer. He even said, and there’s some language here, so be warned, and this is what Chris Christie told Michael Lewis, Trump said this: “Fuck the law. I don’t give a fuck about the law. I want my fucking money.” Now, that was obviously in response to his transition team telling him, “You can’t just keep this money. This is political campaign money. You don’t get to put it in your pocket. That’s illegal.” Trump’s response is “Fuck the law.”

Is this really the guy you want sitting in the White House, Republicans? Is this really the kind of guy that you look up to? That you want your children looking up to? The guy who claims he’s all law and order Trump? We love police officers. We love border patrol. We love our soldiers and everybody out there upholding the law. These lawbreakers, oh, they’re such bad people. A guy who says, “Fuck the law. I want my fucking money.” That is the exact quote that Chris Christie gave to Michael Lewis that Donald Trump said, because when it comes to money, there is nothing above it for Donald Trump. Not the law, not the United States, not his own family. Nothing.

The only thing this man cares about is getting more money. As this quote shows us, he doesn’t even care if he has to break the law in order to get it. Now, I hope not only that everybody understands this story and how big of a picture it paints of how corrupt Donald Trump is, but even more than that, I hope that Robert Mueller and everyone in that special prosecutor’s office happens to come across this article from The Guardian by Michael Lewis so that they can further understand exactly the kind of criminal that they’re dealing with.