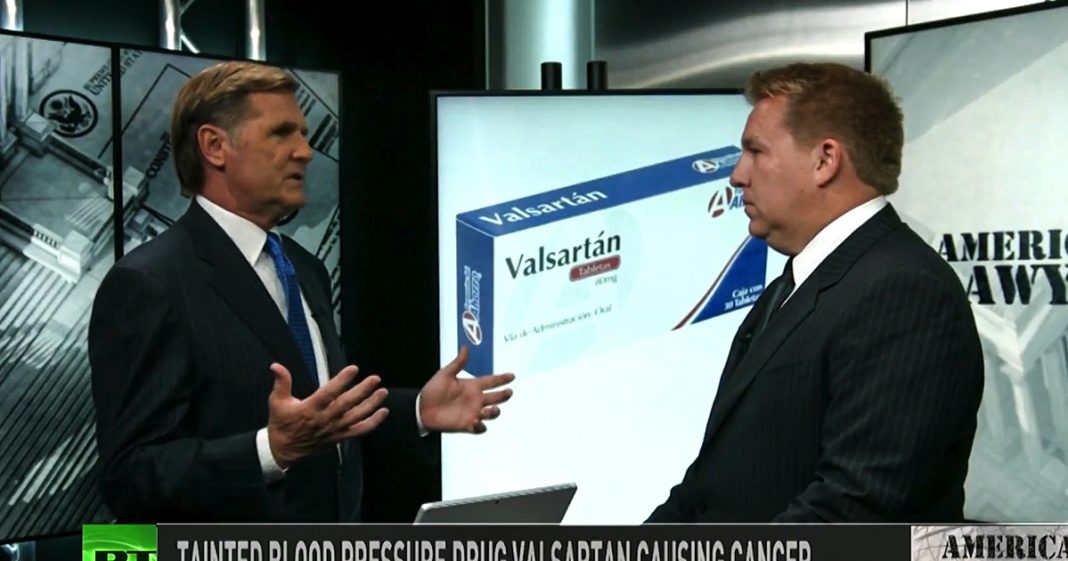 Click here to learn more about the dangers of Valsartan.

Via America’s Lawyer: Mike Papantonio is joined by attorney Daniel Nigh to talk about Valsartan, a major heart medication that has been recalled because batches of the drugs have been contaminated with cancer causing chemicals.

Mike Papantonio: A major heart medication has been recalled because batches of the drugs been contaminated with cancer-causing chemicals. That medication, valsartan, has now sparked major lawsuits. I have attorney Daniel Nigh with me to talk about this. Daniel, there’s been a run on heart … It’s blood pressure medicine. You discovered the Benicar case.

Mike Papantonio: The Benicar case was a disaster. It causes gastro problems on people that were … The equivalent of Crohn’s disease. Now we have another blood pressure medicine that’s even worse. If you really follow where the story goes, we’re talking about the chemical that’s being generated by the medicine itself as it operates inside the body. Talk about it.

Daniel Nigh: That’s right. What we’ve now found out, The FDA’s come out and they’ve found that this generic manufacturing company in China, their name is Huahai, they’ve actually found out that while they’re producing the active ingredient in valsartan that millions of people take that a byproduct is NDMA, which is dimethylnitrosamine and it’s very toxic.

Daniel Nigh: That’s right. For a lot of people, they develop liver cancer. But for a lot of people, they may also develop colorectal cancers, and that’s where we’re seeing a lot of cancers. They might also be getting kidney cancer, maybe stomach cancer, bladder cancer, pancreatic cancer. Those are the areas of the body that seem to be affected because when you digest the valsartan into your body, that’s where the valsartan, the contaminant, the NDMA breaks down.

Mike Papantonio: When you first looked into this case and you actually … you’re the guy that found a lot of this stuff. When you first looked at it, what you saw is relationship of where the product was being manufactured in China, and it appeared that jet fuel, they were manufacturing jet fuel next to that, was contaminating the blood pressure medicine, right? That’s where it started. And then from there it grew to what?

Daniel Nigh: The idea is we thought they were producing jet fuel or something like that, but it appears that when they changed their manufacturing, the way in which to do it, they were trying to save some costs, and so when they’re making the active ingredient of valsartan they’re combining two products and as a result, what happens, the byproduct, when it gets too acidic, we get this offshoot of NDMA and other nitrosamines that are bad for you.

Mike Papantonio: Let me ask you. Of course, the viewers see the list up on the screen of the potential companies that make this. It’s amazing that this many companies are in this business making the same thing, these competitors. What I’m wondering is, there are other alternatives, there’s so many alternatives for blood pressure medicine. Was this some class that was just particularly important or can people go and get another kind of blood pressure medicine that works?

Daniel Nigh: Oh no, there’s many other types of blood pressure medication. There’s other types of blood pressure medications just in the class that might not have this contamination, although we’re not sure about that yet. The FDA says they’re not looking into the rest of the angio retention blockers like olmesartan and other ones like that, but they have other options. ACE inhibitors, or take one … they could even take valsartan that didn’t come from a contaminated manufacturing plant. So they have other options, no doubt.

Mike Papantonio: Every time we see this type of thing develop, the first thing the industry says is don’t stop taking it. I get that, you don’t want to stop taking blood pressure medicine. But it’s easy enough to go to the doctor and say, “We’ve read about this problem we think it’s a real problem.” And it is a real problem. If this is something that if somebody’s been taking it for a long time, has the potential to cause liver cancer, it’s a latent development from the cancer. Is it just liver … have they found out enough information on what types of cancer people should be worrying about here?

Daniel Nigh: It’s not just liver. It’s those other types of cancers that I listed earlier, colorectal. In fact, we actually know that there is the population in Finland that was studied that had a high amount of NDMA in their diet. Nowhere what you would expect from ingesting this pill every day with this level of concentration, but the ones that had the high level of NDMA in their diet, they were two times more likely to have colorectal cancer. And here, these people who have been subjected to this heavy dose of valsartan contaminated NDMA, They’re getting so much more NDMA than that population.

Mike Papantonio: Tell me about NDMA. What do we know about it generally? If you were just to say, here’s what we know, here’s why this was startling to you when you found it. Here’s what you did next. What is it about this chemical that it’s causing such a problem here? How’s it working physiologically? Do you know?

Daniel Nigh: What we know is when we want to study cancer in rats, oftentimes the toxin of choice is to induce them with NDMA. It’s that toxic, it’s that chemical causing issue inside of animals. So it’s very clear and now that we have human exposure studies where we can see the Finland study, where they’re two times more likely to have colorectal cancer …

Mike Papantonio: This isn’t guesswork. This is now we have studies. They’re connecting it up. What is the FDA doing about it? Typically the FDA does nothing about it. The FDA says … the drug companies are in control of the FDA. I think if you watch this program long enough, you understand the FDA is absolutely dysfunctional. Are they doing anything remarkable here to try to help them …

Daniel Nigh: I think the FDA is sort of freaking out here. Because what were seeing here, this is the largest Class I recall in the history of any recall. We know that 3 million people are taking valsartan or some combination of valsartan in their medication and now the FDA has come out and said that more than half they’ve identified are on this recall list and they’re still finding new ones every day. They’ve taken this response to tell the users out there and they’ve notified 1.5 million people are going to be on this recall list, letting them know that they have contaminated NDMA.

Daniel Nigh: Go to your pharmacy immediately, even if you haven’t gotten the recall notice yet, go to the pharmacy if you’re taking valsartan to see if there is another option.

Mike Papantonio: If it’s on the list that is showing on the screen.

Daniel Nigh: Even if it’s not on the list, go take a look, ask the pharmacy. See if it’s recalled.

Mike Papantonio: Daniel Nigh, thanks for being out there. You seem to be the guy discovering these things on a pretty regular basis. Thanks for joining us.

Daniel Nigh: Thank you.