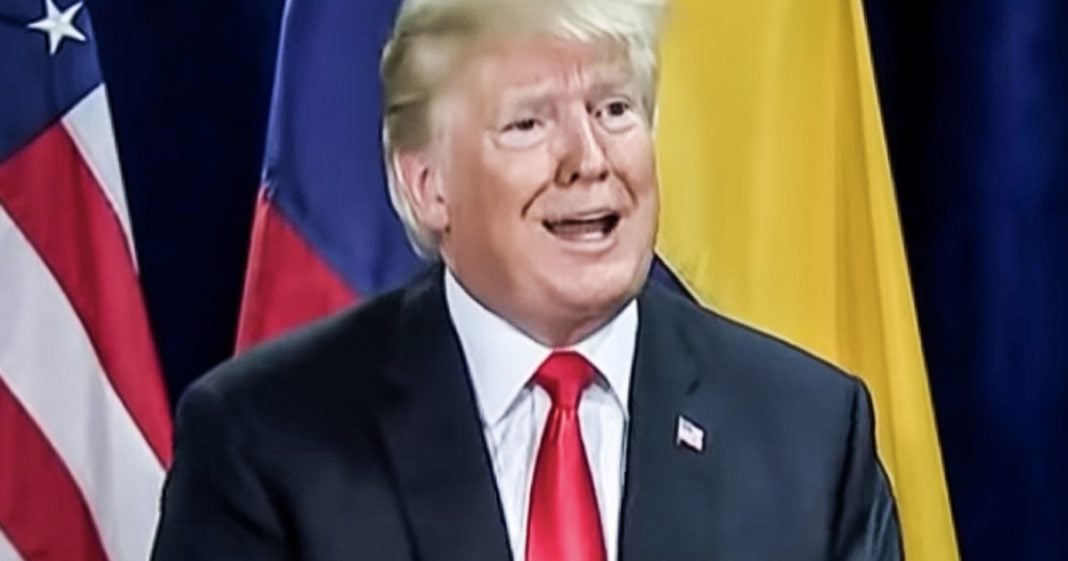 During a UN meeting this week, Donald Trump was asked by the press about the multiple women who have accused Supreme Court nominee Brett Kavanaugh of sexual misconduct. The President responded predictably, saying that the women were lying, but he took the time to discredit them further by suggesting that the latest accuser, Debbie Ramirez, can’t be trusted because she was drunk. Ring of Fire’s Farron Cousins discusses this.

If you think that Donald Trump being laughed at during the UN General Assembly is the only stupid thing that happened yesterday, then clearly you weren’t paying enough attention. Because later on in the day while still at the UN at a UN meeting, Donald Trump was taking questions from reporters, and inevitably, somebody asked him about Brett Kavanaugh and the women who have come forward accusing him of sexual misconduct. Trump responded in true Trump fashion by embarrassing everyone in this country, and showing the rest of the world that we really don’t care about women who have been sexually abused.

Trump said that we can’t believe the second accuser, Debbie Ramirez because she was totally inebriated, she was drunk, so we shouldn’t trust her. Just a stupid, drunk college girl that nobody should take seriously. That’s basically what the President said there. He said, “She was inebriated, so we can’t believe her.” I have a question for you then Mr. Trump, we’re all of the 19 women who have accused you of sexual misconduct, were every single one of them drunk at the time? Or are you just the kind of guy who will 100% of the time take the side of the accused, rather than giving women the benefit of the doubt, or at the very least, hearing them out.

Because that’s what these women want right now. They’re not saying we have to blindly believe them and bury Brett Kavanaugh. They’re saying listen to me. Let’s have an investigation. Let’s make this process fair. Let’s make sure that you can verify what I am saying before you give this man a lifetime appointment to the Supreme Court. If you don’t think that that’s fair, then you’re an absolute idiot. Because yeah, investigations are great, investigations need to happen. This is a lifetime appointment to the most powerful court in the United States. The least we could do is at least look into these allegations and ignore the morons like the President of the United States who says, “Oh, we can’t believe this woman because she drank.”

You know who else was drinking all the time back then according to all of his friends and his former roommate and everybody else who knew him? Brett Kavanaugh. So, we shouldn’t believe anything he says either, should we? Because he was a drunkard, he was a college frat party guy all the time. We have plenty of people to back up that story. So, why don’t you stop attacking the victims, stop defending disgusting behavior, take a step back and just say, “You know what, let’s have the investigation. Let’s clear the air. And if he did nothing wrong, he will sail right through to the US Supreme Court. But if we find something, then that’s the end and I’ll appoint somebody else.” That’s all you had to say, Mr. President. But you’re too much of a failure and you’re too weak, and you’re too scared to come out and ever say what’s actually needed to be said?