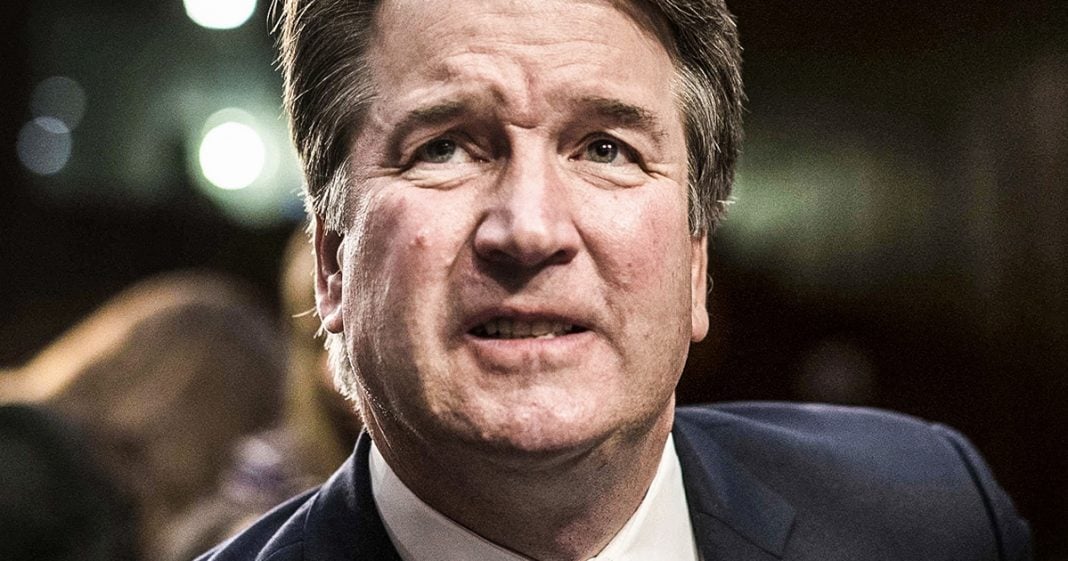 In a move that shows that Republicans have ZERO interest in what Dr. Christine Blasey Ford has to say about Brett Kavanaugh, Republicans on the Senate Judiciary Committee have scheduled his vote out of committee for Friday morning at 9:30am, less than 24 hours after Dr. Ford’s testimony will have concluded. This was never about giving her a fair hearing, as Ring of Fire’s Farron Cousins explains.

Republicans on the Senate Judiciary Committee have scheduled a confirmation hearing in committee for Brett Kavanaugh this coming Friday at 9:30 a.m. Eastern time. Now, the reason that time is important, knowing that it’s at 9:30, is that that is less than 24 hours after Dr. Christine Ford will be testifying in front of that committee about what she alleges happened to her at the hands of Brett Kavanaugh nearly 35 years ago. Less than 24 hours.

Republicans are not only not going to give the public enough time to digest what this woman has to say, but they won’t even have enough time to digest it, order hearings, order investigations, none of it. They want to move forward and plow through this nomination, and they don’t care what Dr. Christine Ford has to say. They’ve made that clear. Lindsey Graham expressly said that. That no matter what this woman says, he’s voting to confirm. They don’t care. They don’t care. They don’t take it seriously. They don’t believe her, so they’re going to push forward and be horrible human beings, and then make the Democrats have to come back next January, assuming they retake the Senate, which seems more and more likely every day, and then they’re the ones that have to clean up this mess. That’s what’s going to happen here.

And then Republicans are going to be sitting there with egg on their face, knowing that they could have prevented it. They could have ordered an FBI investigation. They could have taken it seriously. But instead, they were so desperate to get one victory before this year’s midterms, because they have nothing else to run on, so they are willing to put through an accused rapist and assaulter just to try to take that back to the voters and say, “Look what we did: a thing.” Yeah, it’s a horrible thing, you idiots.

Here’s what’s happening: Republicans don’t have anything to run on this year. They tried to run on tax cuts. They spent millions of dollars running ads during primaries and so far through the midterms, trying to tell people that their tax cuts were helping them. Well, that message fell flat. In fact, they went to some areas of the country, their states, where they tried to find people who’ve gotten money from the tax cuts, to kind of parade them out on stage. They couldn’t find anybody. That actually happened. They couldn’t find a single person in their audience who got any money from the tax cuts, so they’ve had to pull back on that.

They can’t run on repealing Obamacare because they know that their constituents hate that idea now, after they tried it multiple times last year and faced huge backlash for it. They don’t have a Hillary Clinton on the other side of the ticket to run against. They have nothing.

What they wanted to run on was taking over the Supreme Court. But you put up a guy that you didn’t vet, you didn’t look into his history enough, and now you’re refusing to look into his history, just so you can get that seat. And it’s going to cost you yours. You put him on that seat, you’re going to lose your seat. That’s basically what voters are telling Republicans right now. It’s what polls are showing. And it’s what’s going to happen. Because Brett Kavanaugh, sadly, is going to be confirmed to the US Supreme Court, unless the man himself voluntarily withdraws his nomination, he’s in, for now.

But the fact that Republicans aren’t willing to hear these women out, even when they’ve come to them this week, through their attorneys and said, “I have witnesses that are willing to come to DC and testify before the committee”, they’re not even responding to those messages. They’re ignoring it, pretending it doesn’t exist. And that is exactly what’s going to happen to Dr. Christine Ford tomorrow during her testimony, and then again on Thursday during the vote on Kavanaugh.