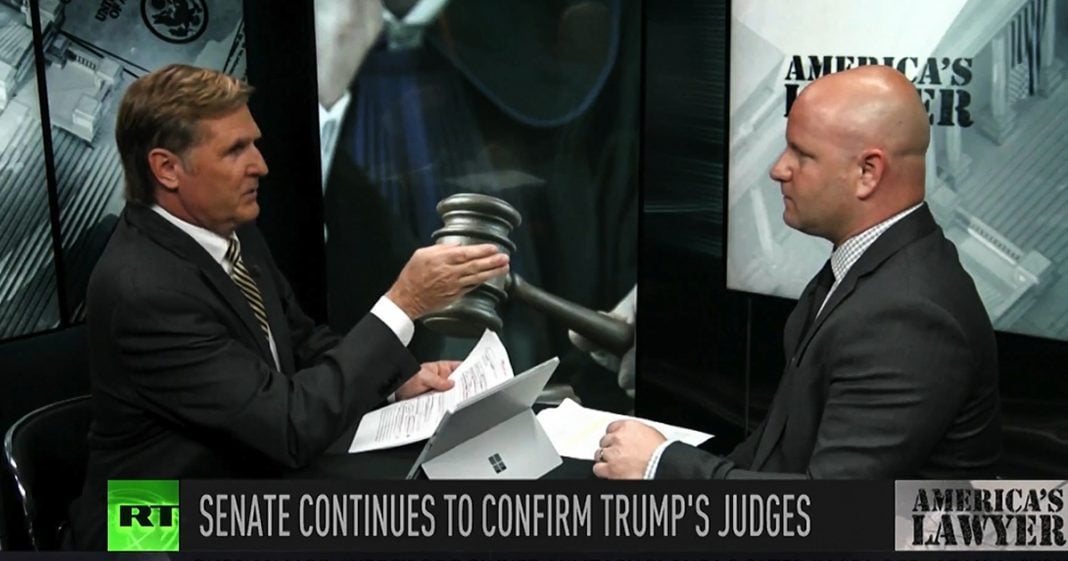 Via America’s Lawyer: While the media was focused on the Supreme Court nominee, Brett Kavanaugh, Republicans cut a deal with Senate Democrats to fast track nearly a dozen corporate judicial nominees to the federal bench. Mike Papantonio is joined by Farron Cousins to discuss.

Mike Papantonio: While the media was focused on the Supreme Court nominee, Brett Kavanaugh, Republicans cut a deal with Senate Democrats to fast track nearly a dozen corporate judicial nominees to the federal bench. Same old shiny thing isn’t it?

Farron Cousins: 23 in the part of the year before the announcement of Kavanaugh, so 49 as of today. Appointed, confirmed, lifetime appointments, these guys are set. 10, or possibly as many as 12, they still don’t know the exact number coming down the pipeline, because you had your Democrats cut this deal with Republicans for no reason-

Mike Papantonio: There was absolutely zero reason to cut the deal.

Farron Cousins: Right. They were in the position of power knowing the mid terms were coming up-

Farron Cousins: But instead, without being forced to, rolled over and showed their belly, and said, “Okay, you can do this because this is going to help us.”

Mike Papantonio: Okay. Let’s talk about a couple of things here. First of all, being a lawyer who practices in front of federal judges all the time I know what a federal judge cannot just do about the case that I’m bringing forward, but about the entire project nationally. For example, you got a judge in California on Monsanto. His rulings are horrendous, I mean, his pace is horrendous. An Obama appointee, round-up probably in the Monsanto case is terrifying.

Mike Papantonio: It’s the NDL, but I do have to do with state court judges that are changing the policy, where it comes to the dangers of round-up, and what we ought to do, taking on … The point being, these judge appointments at the lower levels are far more important, even than the Supreme Court judge. Would you agree with that?

Farron Cousins: Absolutely, and Republicans understood that, and have for decades. Democrats never caught onto that idea. But Republicans understand that, that’s why they’ve been forcing these people through. Mitch McConnell has done a wonderful job-

Farron Cousins: Of sending Trump nominees. Cause Trump doesn’t know who to pick, he’s not a government guy, he doesn’t know these people. So, McConnell, with help from Heritage, Federalist Society is pushing through these pro-corporate anti consumer judges that will do far more damage for a much longer time-

Farron Cousins: Than Kavanaugh will.

Farron Cousins: But Kavanaugh is horrible. I mean, let’s not overlook that at all.

Mike Papantonio: I’m not in on Kavanagh, don’t get me wrong.

Mike Papantonio: We’re going to talk about that in just a minute, but the point being, it’s again, the media, it’s all shiny things.

Mike Papantonio: Right now the only thing we can pay attention to is Kavanaugh, and we’re going to ignore the fact that some of the judges that Trump is appointing, they have been evaluated as unqualified by the very agency that’s asked to qualify them. One judge was rated unqualified cause he was so lazy.

Farron Cousins: It is. And listen, Trump inherited 108 lower court vacancies. He’s appointed, I think at least 100. He still has 126 now.

Farron Cousins: I mean, we’re talking about maybe 250 judges by the end of the first term-

Farron Cousins: That this guy’s going to have.

Mike Papantonio: They’ve made it very clear. This is their proclamation. “We are going to transform the entire judiciary.”

Farron Cousins: And they have.

Mike Papantonio: And they have. That’s what they’re saying right up front. “We’re going to transform the entire judiciary.” Let’s give a couple of examples. Okay, Obamacare. Now, Obamacare was beat up so bad, not in the Supreme Court, but in all of the lower federal courts. To where, there was a time where it almost became a disaster, may still be a disaster. The point is, here was legislation that improved the lives of a lot of Americans. Whichever side you’re on, you’ve got to argue, there was some improvements.

Farron Cousins, thanks a lot. Stories, they get more and more interesting every week as this Trump Administration marches on.