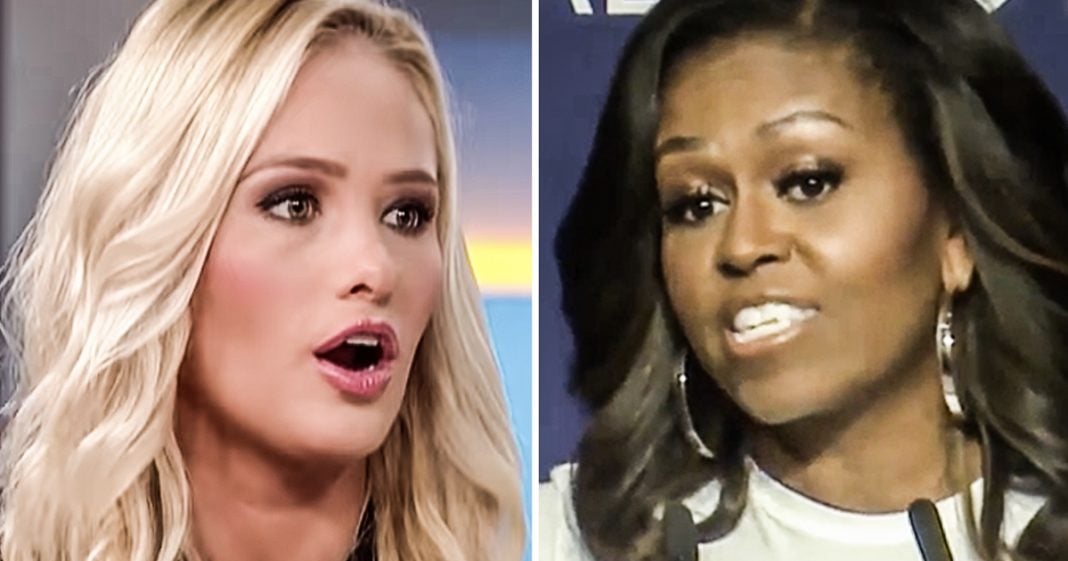 Tomi Lahren thought it would be a good idea to attack Michelle Obama over a recent speech where Mrs. Obama advised people to vote for what they believe in. Lahren stated that Obama needs to “sit down” and that her husband, Barack Obama, doesn’t measure up to Trump on any level. The internet wasn’t having it, and Lahren got smacked down hard for her ridiculous comments. Ring of Fire’s Farron Cousins discusses this.

Tomi Lahren is absolutely the dumbest human being that is talking about politics on a national stage today. Earlier this week, Tomi found herself getting hammered on Twitter after she decided to go after Michelle Obama, after Michelle Obama had the audacity to give a speech where she talked to young people about the importance of voting. My god. Can you imagine a more controversial topic to discuss with young people in the United States? The importance of them voting? Well, Tomi Lahren wouldn’t have it. She was absolutely furious that this former First Lady was out there telling kids, “Hey, you should probably go vote.” Apparently that’s what triggers the blonde little Tomi.

Here’s what she Tweeted. “Michelle Obama said we had a great president. By what measure? Not in economic growth. Not in border enforcement. Not in strength on the world stage. Sit down, Michelle.” “Sit down, Michelle.” “Sit down, Michelle.” I’m struggling to come up with words at the moment, because I’m actually so friggin’ pissed off having to read that garbage that this woman who does have a national audience said on Twitter. Not in economic growth? Really, Tomi? Are you that dumb? Were you not paying attention to the last eight years, when we were pulled out of a recession and went into one of the longest streaks of economic growth in the US history, a streak that actually does continue to this day? You’re willing to give Trump all the credit for it, but you’re not willing to actually look further back on all those graphs that show that when Obama took office, everything started going up.

Did you know that monthly job creation on average was higher during the Obama Administration than it’s been during the Trump Administration? I’m sure you didn’t. Were you aware that, and this isn’t a good thing for Obama, but it’s a thing that happened, that Obama was also locking up migrant children, they were abusing them, detaining them, extending the Flores settlement to keep them locked away longer than legally possible? Yeah, Obama was actually pretty strict on border enforcement as well, but you don’t care about facts. You’re trying desperately to remain relevant in an overcrowded right-wing hate talker field that is getting increasingly hard for any one person to emerge as the leader. That’s what happens, and I’ve mentioned that before, because I’ve seen it before. I’ve been in this business long enough to watch what happens over there on the right.

About 14 years ago, there was a little competition, right? You had Coulter, you had Malkin, you had Ingraham. You had a couple other right-wing hate talkers, all trying to vie to be the loudest voice in that hate movement. Ultimately, they all kind of faded away. They still go on Fox News, but nobody pays attention to them anymore. Same thing’s happening today. You got Tomi Lahren, you have Ben Shapiro, Dave Rubin, Charlie Kirk. All of these people trying to say the dumbest, craziest things possible to get the attention of that particular day, because that’s about how long it lasts. People like Tomi Lahren know that their career has a shelf life, and it is a very short one at that. This girl, woman, whatever, has about two-three more years before she finally goes down the tube, and another more attractive right-wing hate talker emerges to kick her out of her throne, and forever cast her into obscurity. Mark my words, that day is coming, and it’s coming a lot sooner than Tomi thinks.