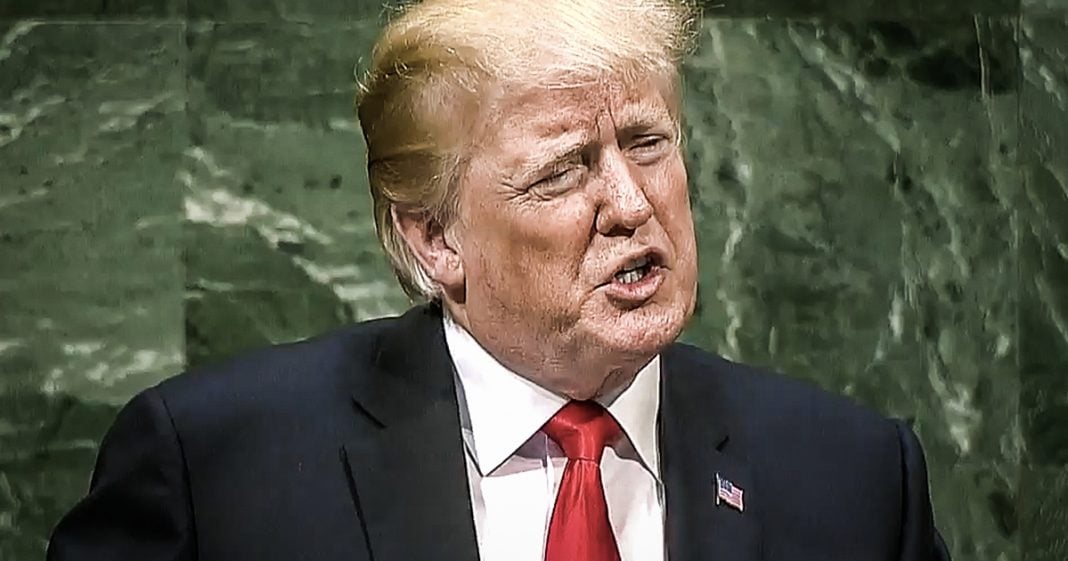 During a speech at the UN general assembly this week, Donald Trump decided that it was a smart idea to brag about all of his “accomplishments” since becoming President. What the President didn’t realize is that the rest of the planet isn’t addicted to Fox News, and they knew he was lying. So in the middle of his braggadocios speech, the entire assembly erupted in laughter. Ring of Fire’s Farron Cousins explains how Trump has made the US the laughingstock of the entire world.

Donald Trump gave a speech at the U.N. General Assembly on Tuesday of this week, and I’m sure by now everybody’s seen it, but I want to show it again, because the reaction from the crowd when Trump starts in his bragging ways is just too great to not watch over and over and over. Here it is.

Donald Trump: In less than two years, my administration has accomplished more than almost any administration in the history of our country. America’s … So true. Didn’t expect that reaction, but that’s okay.

To give you a little bit of context, here’s what happens at a U.N. General Assembly. You’re surrounded by other world leaders and high-ranking officials representing other countries from around the world. When they start laughing at you because you’ve said something painfully stupid that they know is not true, that’s basically the equivalent of the entire world laughing at you.

That is exactly what just happened to Donald Trump, unless, of course, you happened to watch that clip on Fox News, in which case they actually edited out the laughter so the president didn’t look as stupid. I don’t know which is worse, the fact that Trump went up there, told a blatant lie, got laughed at, or the fact that Fox News thought it was a good idea to edit out the laughter, even though we all already knew what happened. This was major news yesterday. People were talking about it for hours and hours. Yet Fox News thought they could pull a fast one on their idiotic viewers by just taking out the laughter. Absolute insanity.

But to address Donald Trump’s claim that he’s done more in two years or a little less than two years than anybody else, I mean, that’s false on its face. We know that. There’s actual numbers that back this up. He has not passed as many laws. His approval rating is in the tank. Really, by every measure other than court appointments, he’s not doing as much as anybody else. Even with the court appointments, that actually has more to do with the Senate than it does the president. But I will give him credit, because that is one area where he is absolutely excelling. They are packing the courts left and right in this country with corporate political hacks ready to take away our rights at the first opportunity they get.

But by any other measure, Donald Trump has not lived up to his predecessors. He hasn’t even lived up to the horrible predecessors like George W. Bush, let alone Barack Obama, who Trump constantly feels the need to measure himself against. That is a measurement that he will never add up to, yet he keeps doing it. But more importantly, the rest of the world understands that.

They know that Donald Trump has not kept his campaign promises. They know that his trade wars are hurting our consumers, our farmers, our manufacturers, everybody. They know that any time he goes on a world stage, he makes a complete ass of himself. He’s taunting our allies, being absolutely horrid to them, while treating bloodthirsty dictators like they’re his best buddies.

He’s alienating the people that we need to be friends with and embracing the people who would sooner bomb us than embrace us. That’s what’s happening with this administration. The rest of the world sees it because they’re not, like the president, addicted to Fox News. They understand reality. They know what’s actually happening. Unfortunately for this country, the president doesn’t seem to understand that.