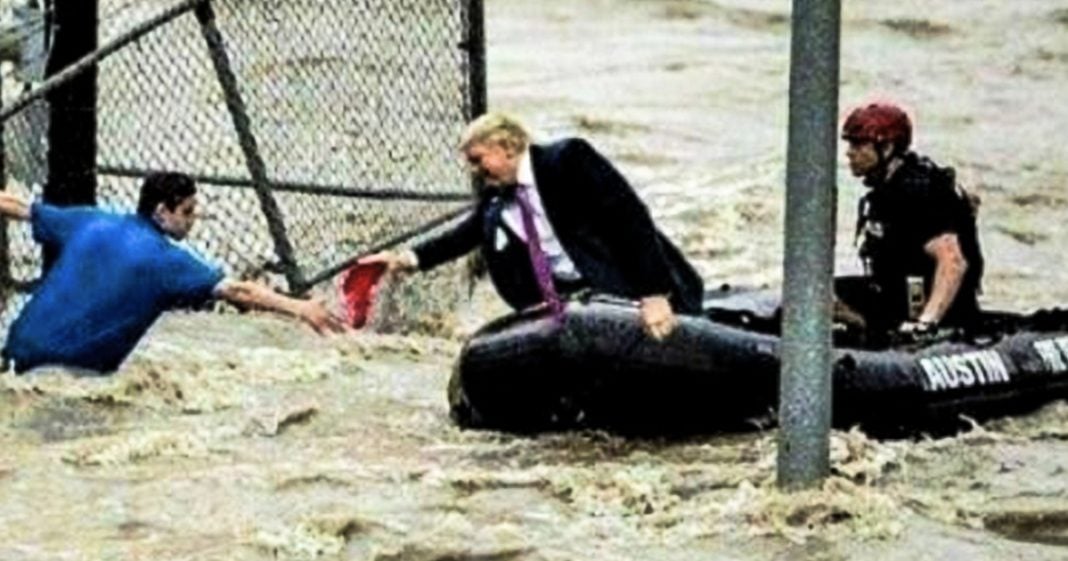 The people who support President Donald Trump aren’t the sharpest tools in the shed, but they certainly are tools. A poorly photoshopped image of Donald Trump handing a flood victim a MAGA hat from a rescue raft has been making the rounds on conservative social media pages with over a quarter million shares. The photo was tagged with the caption “you won’t see this on the news,” and they are actually correct about that – the news media has slightly more integrity than to show this obviously forged picture. Ring of Fire’s Farron Cousins discusses this.

Trump supporters love to prove that they’re obviously not the sharpest tools in the shed, but that they are in fact tools. Over the last few days, there’s been a very poorly photoshopped picture floating around in conservative social media circles that allegedly shows Donald Trump reaching out to a guy stuck in floodwaters from Hurricane Florence. Donald Trump is on that rescue raft with the other rescue workers. He’s reaching out. He’s trying to help that guy, to save this life.

That photo has over 250,000 shares on conservative social media, and it’s along with the caption, “You won’t see this on the news. Make it go viral.” And you did just that, you made it go viral, but you morons didn’t bother to even look closely at the photo to be able to tell that it is very clearly photoshopped.

Not only that, but let’s dissect it for a moment, okay? Do you see the photo? Here’s the photo. Now, does it look like Donald Trump is reaching out to help that man? Or does it look like he’s just trying to hand him a Make America Great Again hat? That’s not helping.

Second, if this was a legit photo, why is Donald Trump in a rescue raft wearing a suit, no hat, no protective gear whatsoever, no life jacket in these raging floodwaters? He’s just that brave? He’s that much of a man’s man to go out there full suit and tie to rescue people with, I guess, a MAGA hat flotation device?

Nothing about it would even make sense, even if it were real! And that’s one of the ways we know that it’s not real. But that hasn’t stopped these conservatives from sharing it all over social media.

The real photo actually shows multiple rescue workers in the raft trying to save the man. Those are from the floods that took place in Texas. Donald Trump was no where near there. He’s probably never been in any kind of rescue raft, possibly never even in a raft in his life.

But these people are so desperate to paint Donald Trump as some kind of savior here in the United States that they are willing to believe anything. I mean, this is a cult-like mentality that these people have, a cult-like worship of Donald Trump. I mean, this is the same kind of propaganda that they put out in North Korea about their leader, the Kim family, and all of their alleged accomplishments that obviously never took place. Here in the United States, we’re seeing it among the Trump supporters.

Anyone who believes this photo is real needs to immediately go to their local hospital, local imaging center, get themselves a CAT scan, and find out exactly what is wrong with your brain, because something’s not right. It’s a very obviously photoshop. It was actually meant to be humorous, put together by anti-Trump people, and yet the pro-Trump groups were so hell bent on making their guy look like Jesus Christ himself that they took it, they ran with it, and now they all look even dumber than they did before.