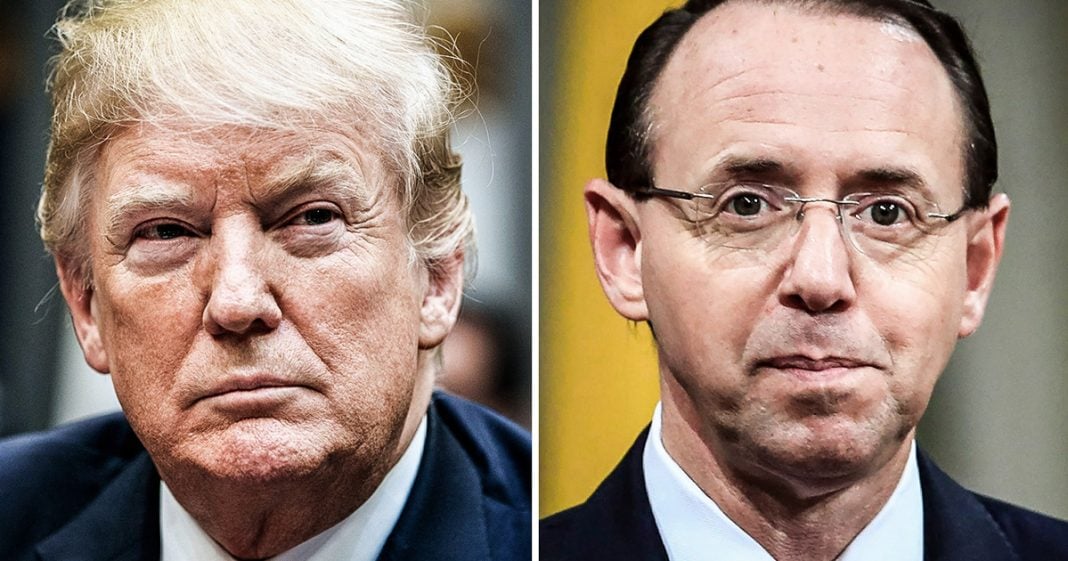 Rod Rosenstein was rumored to have either resigned or be fired on Monday, a story that left everyone on the edge of their seats until it was revealed that nothing happened…yet. The Deputy Attorney General is set to speak with President Trump again on Thursday, and many are expecting that this will be the final confrontation between the two men. Ring of Fire’s Farron Cousins explains what this could mean for the Mueller probe.

So Monday was pretty dramatic, right? I mean, we had Rod Rosenstein allegedly resign and then head over to the White House to allegedly be fired only for nothing at all to happen. Now, during that time that Rod Rosenstein was in the White House, a lot of people were already gearing up. They said, “Get ready, folks. We’re going to have to take to the streets,” which was absolutely accurate if Trump had fired Rosenstein, but it turns out he just wanted to talk to him, allegedly, according to Sarah Huckabee Sanders, about recent news stories. Those recent news stories obviously being the New York Times report from late last Friday that said Rosenstein had considered wearing a wire to record Donald Trump and even joked about invoking the 25th Amendment, a story that really raised eyebrows, not because Rosenstein would say these things, but because the person who leaked it to the New York Times obviously had to have been a close ally of Donald Trump and was trying to get Rosenstein fired.

There’s actually theories out there that it may have been Trump himself who not only authorized this leak but possibly even created the story in order to give himself cover or some kind of excuse in order to fire Rod Rosenstein. Now their next meeting’s been pushed to Thursday, so as of right now, Rod Rosenstein, still the deputy attorney general of the United States, that may all change on Thursday, but you know what else happens on Thursday? That’s the day that Dr. Christine Ford is supposed to go and give her testimony to the Senate Judiciary Committee, to tell her story of the alleged sexual assault that took place at the hands of Brett Kavanaugh against her nearly 35 years ago.

What better way to distract the public from your embattled Supreme Court nominee than to fire the man overlooking the Robert Mueller special prosecutor investigation? That is a very likely scenario. Obviously we have to wait till Thursday to find out if that’s going to happen, but here’s what happens if Rosenstein does in fact get fired. First and foremost, it’s going to give the special prosecutors even more evidence of obstruction of justice. I mean, that’s going to be a really stupid move on behalf of Donald Trump, which makes it all the more likely that he’s going to do it because he’s a very stupid human being.

If Rosenstein gets fired, the person that’s going to take over is Solicitor General Noel Francisco, who will likely be forced to recuse himself because he used to work at the law firm Jones Day that’s actually representing Donald Trump in the Robert Mueller probe, so if he stays on there’s a huge conflict of interest, so it’s likely that he would be forced to recuse himself. He’s actually already recused himself from multiple things within the Trump Administration because of his connection to his old law firm and other various connections he has, so therefore it would then go to Steve Engel, who heads the department’s elite and secretive office of legal counsel. This is a guy that worked in the George W. Bush Administration. He’s a hard right guy, but as we’ve seen from most former members of the Bush Administration, not exactly a Donald Trump loyalist, so it’s iffy on what we would get from him.

But nonetheless, if Donald Trump does in fact fire Rod Rosenstein over this fraudulent New York Times report, it’s going to be obstruction of justice, 100%, without question, without a doubt, because we know the intent, and that’s what obstruction of justice is all about, the intent. Donald Trump’s intent is to shut down the investigation, and what better way to do that than to get rid of the man overseeing it while at the same time distracting the public from all these accusations that are about to come out about your Supreme Court nominee?