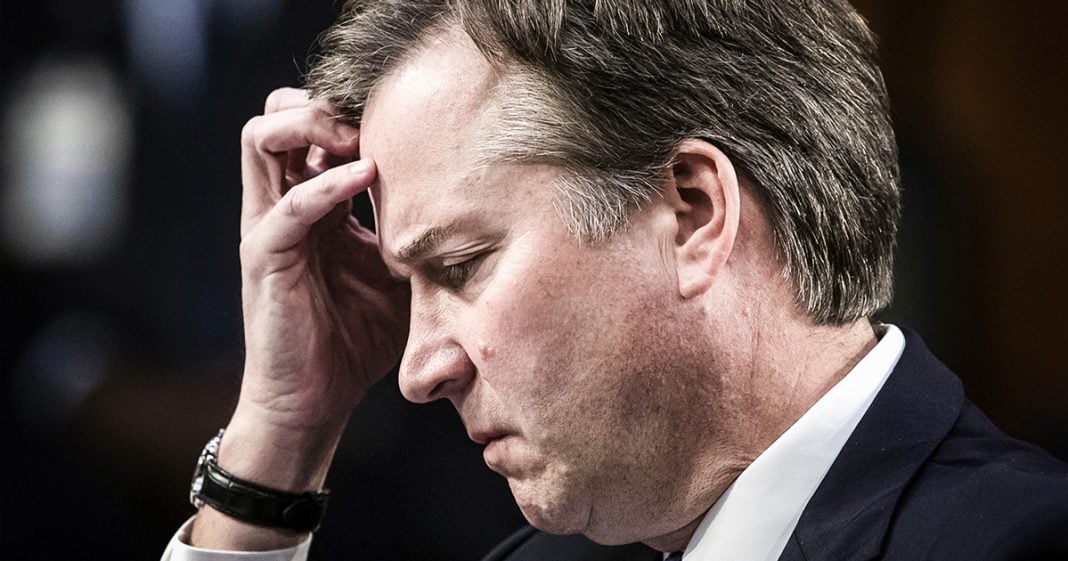 Republican politicians believed that they were protecting their nominee by not calling for an FBI investigation into his alleged sexual misconduct, but what they’ve really done is shown the entire country just how partisan and corrupt they are. This decision is going to cost them big time in the midterms, as more and more of Kavanaugh’s former defenders jump ship and say that the allegations are probably true. Ring of Fire’s Farron Cousins discusses this.

The Republican Party bet all of their chips on Brett Kavanaugh being confirmed for the United States Supreme Court. That was a major gamble and, as of right now, it’s looking like it’s going to be a major loss for the Republican Party. Specifically, they’re decision to not call for an FBI investigation into the accusations against Kavanaugh. They actively blocked repeated calls for an FBI investigation.

Now, as many people have pointed out in the last few days, if Kavanaugh was, in fact, innocent, and he wanted to clear his name, why would he, and the Republicans, oppose an FBI investigation? Because if he did nothing wrong, there would be nothing the FBI could find that would make him look bad. So they would exonerate him, clear his name, put everything to rest, then he could sail through confirmation without a care in the world. Other than the four times he committed perjury, which is, obviously, another issue at this point.

But nonetheless, if you’re innocent, why run away from an investigation? Why block an investigation? I mean, same thing applies for Donald Trump with Robert Mueller. Why are you trying to shut it down, if you know you did nothing wrong? The answer, in both cases, is because, obviously, they did something wrong. You don’t fear an investigation unless you know that there’s something they’re going to find. Republicans picked this hill to make their last stand, to block this FBI investigation into their Supreme Court nominee. This is the hill they’re going to die on. This is what they took their last stand for and it failed miserably.

Not only do a majority of Americans not approve of Brett Kavanaugh being confirmed for the US Supreme Court. And not only have multiple former allies of Kavanaugh, who originally said there’s no way he could have done that. They’re now saying, “I retract my original statement and I change it to, yes, he could have absolutely done that.” Kavanaugh’s losing allies. Republicans are losing the support of the public, as is, Kavanaugh, and it’s going to cost them dearly in the midterms. There is no way around it now. Republicans, like I said, they’ve bet everything on getting Kavanaugh onto the Supreme Court. And everything they’ve tried to do has backfired miserably. They’re out there, right now, whining about civility and Democrats not giving their candidate a fair hearing. When did this happen? Merrick Garland. How about then? That’s when it happened.

When you idiots refused to even give him a hearing, so do you dare whine about civility, or breaking practice, or changing the way things work. When you morons are the ones who started it. The Democrats aren’t even doing that. Neil Gorsuch went through without a fight. It’s just that this guy, because more, and more, and more, and more women come out saying that he attempted to rape them. Yeah, maybe, we’ve got a few problems with that, as every normal human being should. But that’s the hill you chose to die on. That’s what you wanted to run on in the midterms. Good luck with that.

I don’t think it’s going to go over very well with the voters. I don’t think Brett Kavanaugh is ever going to make it to the Supreme Court and, if he does, he’s not going to serve on there very long. Because Democrats are already talking about the fact that, if Republicans somehow manage to confirm this guy, when we take power again, we’re just going to launch the investigations then. Then impeach him, remove him from the Supreme Court. Then, after that, it’s time to move onto Trump. Those are your only options Republicans. This is a mess you created and, now, you’ve got to live with it.