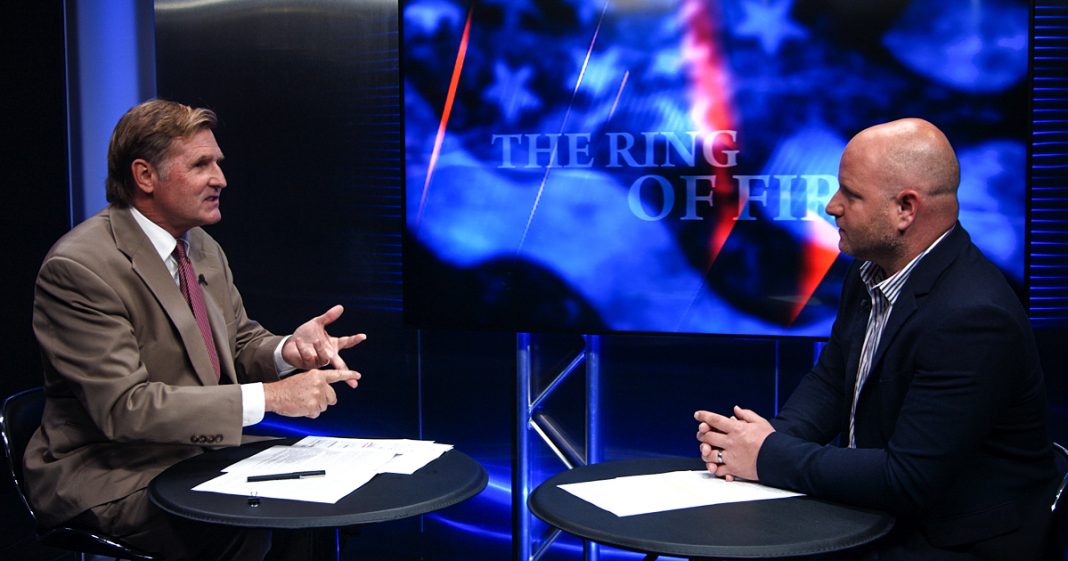 Lawsuits are stacking up against the University of Southern California with more than 300 students and staffers alleging that the school covered up the sexual assault of former campus doctor, George Tyndall. Ring of Fire’s Mike Papantonio and Farron Cousins discuss this issue.

Mike Papantonio: Lawsuits are stacking up against the University of Southern California with more than 300 students and staffers alleging that the school covered up the sexual assault of former campus doctor, George Tyndall. This is a story that just doesn’t go away because it seems like every month, people are coming forward saying that USC did everything they could to cover up the truth of what was happening.

I looked at this story and you try to find out what are the most salient aspects of the story? I mean, the salient aspects are what did the girls report, what did the women report about what was happening. The thing that is inescapable is you’ve got people who are assistants, staff assistants, and I think we learned this on another time when we did this story, is that this is a doctor that was performing gynecological exams without gloves and commenting as he goes along and actually keeping them in a test that should last for 10 minutes was 30 minutes, as he was using his bare hands to perform these gynecological studies. Of course, just as you’d expect, complaints were made, complaint after complaint made, to USC and they covered it up.

Farron Cousins: Right. This one is particularly disgusting because it’s not just, oh, a few students that … More than 300 right now. More than 300.

Farron Cousins: Then, as you just said, the staff, the staff also reported not just that kind of behavior because he was being sexually explicit with them, also hugely racist comments he was making to them.

Mike Papantonio: It was only racist comments that actually started his downfall.

Mike Papantonio: In other words, it wasn’t the fact that he was actually molesting these girls year after year. It was the racist comment. All of a sudden, USC’s like, “Well, we’ve got to pay attention to that.”

Farron Cousins: Well, and you know, this guy was basically the on-campus gynecologist. The women there at the university had little option. It was on campus, it was close, it was allegedly safe because it was campus sanctioned, so they go in there. Then this happens. They report it to the school, women after women, into the hundreds.

Mike Papantonio: The same stories though. It was the same kind of stories.

Mike Papantonio: They kept hearing the same story. It wasn’t like there was anything aberrational about it. I think it’s interesting. After they come up and they determine that he’s making these discriminatory, sexually inappropriate comments, as they describe it, then he sues the university. He doubles down. He says, “Well, I’m going to sue the university for what you’ve done to my career.” That’s when all hell breaks loose and the rest of the stories are finally told because, truth is, USC had the stories all along.

Farron Cousins: Right. That’s almost as big of an issue as what Tyndall himself was doing because this is the same kind of behavior that we saw with the Catholic church, we’ve seen it at Ohio State with USA gymnastics. It’s that the institution knew this was taking place, whether it’s a university, a church, or whatever it is, they knew it was happening, they did what they could to cover it up, Penn State, another great example, and this is what happens. You cover it up, you don’t get rid of the abuser, you don’t stop the behavior, and you allow more women, due to your complacency with it, to fall victim to this guy. That’s why we’re having such massive lawsuits.

Mike Papantonio: Well, yeah. Look, it’s not about, gee, we’re trying to protect the victims. It’s never about the victims.

Mike Papantonio: It’s we’re trying to protect our staff member because, A, if these reports are made, it hurts our reputation, because colleges actually … They go about rating how safe is your child going on this campus. That’s something they look at and they publish material about that. It goes to the issue of the overall validity of how much oversight there is going on in the university. You put your child in university. You expect there be some oversight. Now we learn that these universities do just the opposite. It’s not just universities we’re talking about.

Mike Papantonio: But here you have universities where they actually have infrastructures right there at the university to when the victim comes in, the first thing they do, they get them to sign a nondisclosure.

Mike Papantonio: Okay. We want you to sign a nondisclosure. Really? You want a nondisclosure because you want to protect not the victim, and you’re not doing it really even to protect the aggressor, you’re doing it to protect the university. What makes me so angry about the stories like this is because the university, it’s all about what’s our reputation, are we going to be sued, this is one reason they didn’t. That’s because they’re worried about being sued. If you get sued one time, other people hear about it, it’s public, and then other people pile on because the same thing’s happened to them. One thing they do, and I just … Somebody’s investigate this. I know in Yale, for example, we’ve talked about this before, they’ve got a system. Somebody is attacked, they go, they meet with this committee. It’s a committee that says, “Oh, well, we’re going to take care of this.” Well, no. They don’t really take care of it. They have this person sign a nondisclosure and it dies there.

Farron Cousins: Well, yeah. Another thing we’re looking at here, too, is just the fact that when you have these institutions that help with the coverup, which again we’re seeing in too many specific instances here, but Tyndall himself, right, at USC, in a position of power, abusing these women for years, and it even went on for at least one more year after the school realized they can’t cover it up anymore. A year later, they finally put him on leave. But you have created this new generation, essentially, of women who have to carry this around for the rest of their lives.

Farron Cousins: Most of them don’t like to come forward because when they do, as you pointed out, they’re treated like they’re making it up, that it’s not credible, then no investigation happens, they lose faith in the entire process. You’ve destroyed them on so many different levels, and that’s what’s so disgusting.

Mike Papantonio: Well, part of the story here. Harvey Weinstein, for example, believes that he’s above the law. He’s considering his payouts to those in power. There’s a chance that he might be right. This story with Weinstein, this latest story on Weinstein, lands on Cuomo, Governor of the state of New York. This is a story that’s been out there but they held it back until after the election. This is really interesting. The way this story developed is it’s been out there for quite a while. The media didn’t pick it up because this was a hidden story. Some media members … It’s like almost like the very beginning of this story, the media wouldn’t report the story. The media also didn’t report that Andrew Cuomo had actually gotten this huge, what was it, $25,000-

Mike Papantonio: … from David Boies, okay, who is, by the way, Harvey Weinstein’s lawyer, and that all of a sudden, we find out that the investigation into the Weinstein case disappears. Cuomo ends up calling it off.