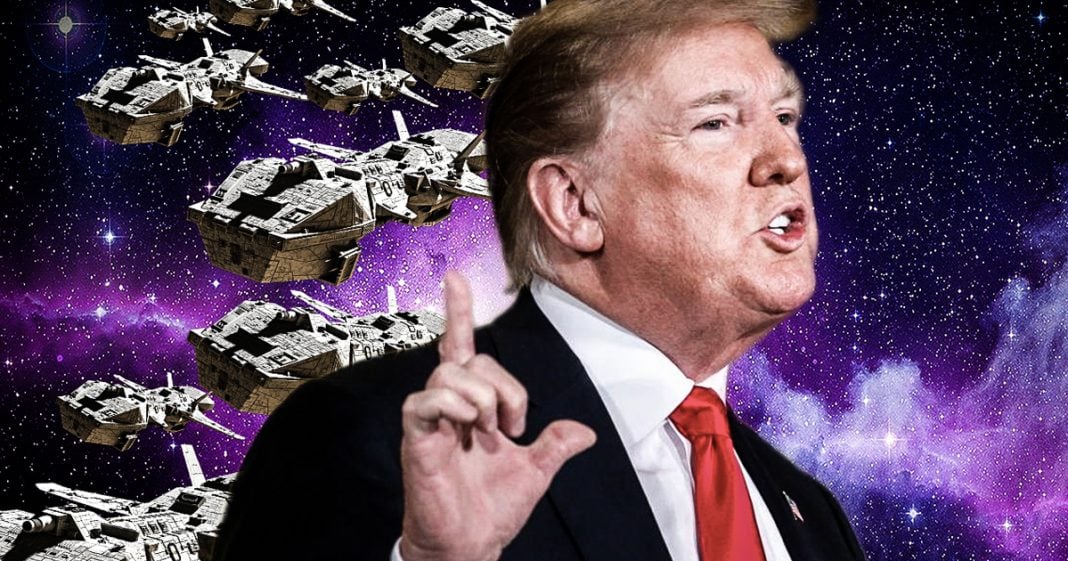 The initial cost estimates are in, and Trump’s vanity Space Force project would cost the United States $13 billion over the first 5 years of its existence. To be honest, those estimates are far lower than what was expected, but considering the fact that this project is 100% unnecessary, every penny spent on it is a complete waste, especially considering the other projects this could fund. Ring of Fire’s Farron Cousins discusses this.

Well, folks, the numbers are in, and we now know exactly how much Donald Trump’s Space Force is going to cost us over the next five years. To be honest, the number is actually a lot lower than I had imagined it would be. Right now, the price tag is coming in at $13 billion over the next five years. Again, something like a Space Force, an outer space military, you really would expect that to cost a lot more than $13 billion. I mean, where are they gonna dock? We don’t even have any functioning spaceships in the United States anymore, but they think they’re gonna be able to make all of those, make new buildings, and offices, and hire I think 13,000 employees is what they want to hire, and you can do that all for $13 billion? That doesn’t seem right, does it? I mean, it seems like you would spend that on one spaceship, not a whole fleet of them for an entire space army, but that’s the official number that the US Air Force Secretary, Heather Wilson, has given us. Just $13 billion. That is a bargain.

Now, I ask you, ladies and gentlemen, do any of you want to fly in a bargain spaceship? Do any of you want to work for a bargain department? Because I sure as hell wouldn’t. Let’s be honest. The price tag is gonna be way, way, way more than $13 billion, but Trump doesn’t care. As long as he can get the thing created and then worry about the minute details later, like spaceships, and uniforms, and weaponry, if he gets it created, it’s there, and it will have his name on it forever, because that’s what this whole thing is all about anyway. This is a vanity project put forth by Donald Trump because he knows that that might be his legacy, that might be his Obamacare. The Trump Force. That’s what it’s going to be. It’s not Space Force, Ground Force, Sea Force, Air Force. It’s Trump Force. That’s what this is all about. Putting his name in the history books forever for creating this department.

About that $13 billion price tag, okay, even if that was a steal, even if that was a good deal and we were able to do everything we needed to do with just $13 billion, there’s literally anything else in this country that we could spend it on that would be a better investment. We have rampant poverty here in the United States. We have hundreds of thousands of people living in what’s called extreme poverty, less than between $2 and $4 per day, and they work. They just make so little that their average expenditures can not exceed $2 to $4 per day. We want to spend $13 billion on Trump’s vanity project?

I mean, how about Medicare for all, right? Every time you bring that up, a conservative will chime in, no matter where you are, they’ll find you and jump right into your conversation, and say, “How you gonna pay for that?” How you gonna pay for $13 billion Space Force? Debt-free college, “How you gonna pay for that?” Maybe don’t create a Space Force and use that money for debt-free college instead, or Medicare for all, or hell, maybe we just give existing teachers a raise. Maybe we work on our crumbling infrastructure, which we were already told earlier this year there’s no money for. Well, I just found $13 billion that this administration is ready to spend today. Why not spend that on infrastructure?