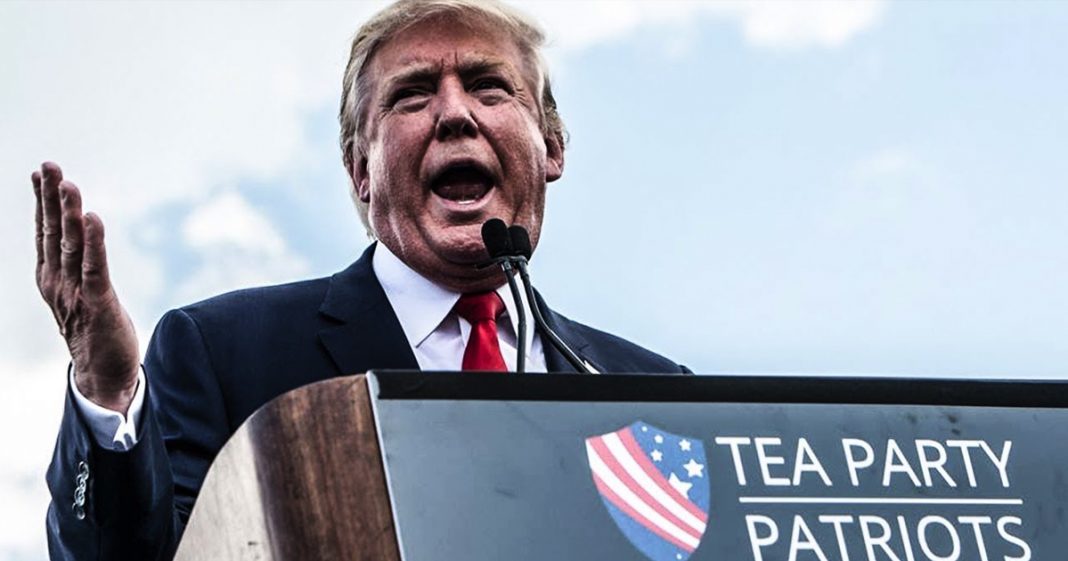 Our next question is from @PoshPointy who asks, “The more and more I see what Donald Trump is doing to America, the more I think he’s a Tea Party President. What do you think?” Ring of Fire’s Farron Cousins discuss this issue.

Our next question is from @PoshPointy who asks, “The more and more I see what Donald Trump is doing to America, the more I think he’s a Tea Party President. What do you think?” I think he is 100%. Listen, the Tea Party was formed by basically a group of people with a lot of funding, outside shadow funding I guess you’d call it, from the Koch Brothers and Americas for Prosperity, but it’s really put together by people who had no idea what they wanted. They just didn’t like the President for some reason, maybe it had to do with the color of his skin.

Donald Trump is the Tea Party President. Not just because he kind of has that same mentality of, “I don’t know what I’m doing. I don’t know where we’re going, but we’re here and ah.” It’s because the Tea Party dumbed down the Republican Party to the point that somebody like Trump could actually excel. The Tea Party is what help give us people like Michelle Bachmann, or Christine I forget her last name, I’m not a witch woman. Those are Tea Part people. Sarah Palin rode the coattails of the Tea Party movement even though she came about before them and then kind of faded into obscurity, but the Tea Party brought her right back into the center-fold and she absolutely loved it.

But the Tea Party has been an absolute cancer on the Republican Party. It used to be a difference of ideals, a difference of ideas. Policy, that’s what separated the two parties. Do we want to do A or do we want to do B? Republicans say A, Democrats say B, usually meet somewhere in the middle, but now, and this is largely in part because of the Tea Party, we’re having to have basic arguments about right and wrong, like is it okay to punch a Nazi in the face? Yeah, it’s okay to punch a Nazi in the face. Yes, Nazism is bad. No, Black people are not horrible or worth less than White people. That’s where we’re at as the difference between the two parties at this point.

And again, you can trace that all back and thank the Tea Party for it, because regardless of what they say, they’re biggest gripe, even if it was unspoken against Barack Obama, was that he was a Black man who had a lot of power and it made these old White people at the Tea Party rallies feel very, very weak. That is why Donald Trump consistently and constantly talks about Obama. Tries to trash him tries to tear down his legacy, because he, just like those Tea Party rally folks cannot stand the fact that an African-American man came in, was successful and did a better job than they could ever imagine.