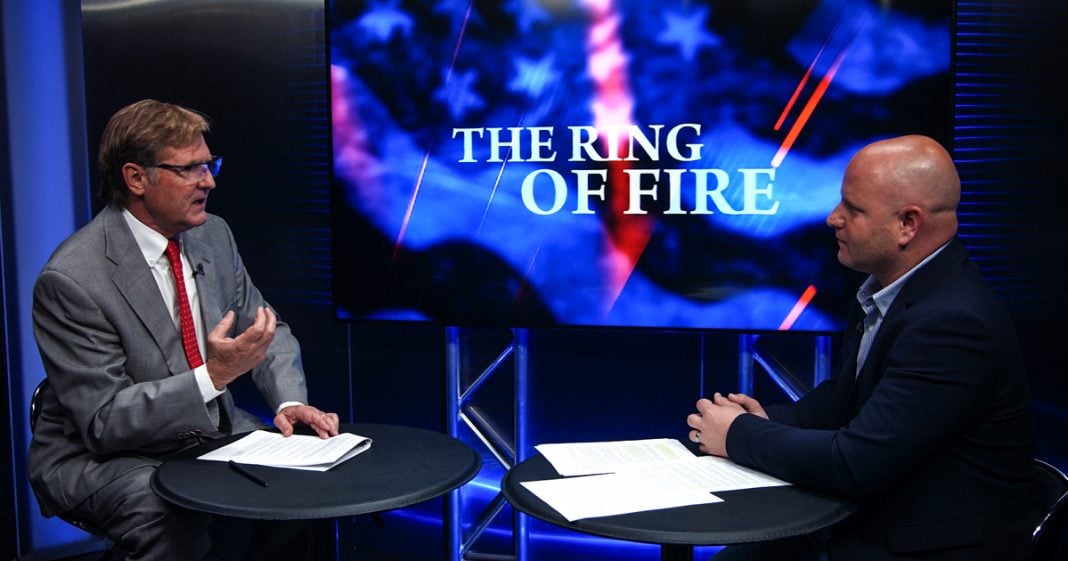 University of Wisconsin is trying to argue that paying student athletes is gonna destroy their athletic program. Ring of Fire’s Mike Papantonio and Farron Cousins discuss this issue.

Mike Papantonio: University of Wisconsin is trying to argue that paying student athletes is gonna destroy their athletic program. I am so tired of the NCAA. The NCAA has been able to push themselves around for so long. They start off with this discussion, well, we don’t really wanna pay. Listen, these kids are going to college. A lot of them can barely make ends meet. They’re practicing every day, they’re bringing in millions, hundreds of millions of dollars to the university. Look at the University of Alabama. My God, they’re making more money than third world countries. The players on the field are making the money for them. Now, here’s the problem. Most of those kids playing are never gonna make it into the big money.

Farron Cousins: Right, you have maybe four or five from that Alabama team.

Farron Cousins: One or two from every other school.

Mike Papantonio: Exactly. So, they’re never gonna make it into the pros. They’re out there fighting through injuries. A lot of them are actually having to get welfare checks just to live. They’re having to get loans to live. But, the NCAA created this, well, we really care about these scholar athlete. It was nonsense. There’s some great documentaries that have been done on how corrupt the NCAA is. This is always at the top of the story, isn’t it?

Farron Cousins: It is. The argument that the University of Wisconsin’s chancellor is trying to make here is that, well, we just can’t compete with the big money that other schools could offer so we need to scrap this idea entirely. The way you fix that is that the money should be coming, if you pay student athletes, from the NCAA and it should be standard. A quarterback at Alabama is gonna make the same as a quarterback at UNC.

Farron Cousins: Make it standard across the board. Don’t give anybody a financial advantage to get better players. I solved your problem right there, University of Wisconsin. Solved.

Mike Papantonio: We’re not talking about making these athletes rich.

Mike Papantonio: They’re talking about paying them a stipend that is in addition to the scholarship that they might have. I know we’re gonna get the this is gonna corrupt athleticism in the university. That is absolutely nonsense, because the answer is, as you say, there’s a norm. You’re not paid more in Alabama than you are at Topeka University. It all works the same way. But, the NCAA has used this argument for decades now, and they’ll always have some front guy. Who’s the front guy here? University of Wisconsin chancellor. This is the guy of the day that they’re gonna use to pitch this idea that oh, gee whiz.

Farron Cousins: It’ll bankrupt our school. You’re making millions every season for ever sport, and you can’t give these kids out there who, in the case of many of them, they’re risking their future out there, with concussions, CTE permanent leg, knee, arm injuries. And, they get nothing out of it?

Mike Papantonio: Brain damage. We’re talking about brain damage that affects them in later years. NCAA has got to be brought under control. This is the best way to do it, to take some of that power away from it. People watching this, we can’t cover all the details of this story, but it’s an important story because it starts developing every few years. Now, it’s back out there. We know exactly what they’re gonna do because they do it every three years. Here it is. Gee whiz, we have to really preserve the idea of amateurism. The term amateurs. That’s the first argument. The second argument, the argument that you talked about, is it’s not fair. This university A can’t afford to pay what this university B pays. So what? NCAA is the person that’s the equalizer. They’re the people that are the equalizer. The problem is that if we start handing out money like that, you’re gonna have athletes in one sport that aren’t gonna be paid the same as an athlete in another sport. Well, that’s reality. That’s how life works.

Farron Cousins: Yeah, and that might be unfortunate for athletes there, but if you get something, isn’t that better than nothing? Also, you could base it on a percentage. If football brings in 50% of the money, you go there. If it’s basketball or baseball, as it is at other schools, it goes there.

Mike Papantonio: This finally has to prevail. The NCAA has gotta be slapped around.

Farron Cousins: There’s too many smart ways to do it for it to not have already been done.

Mike Papantonio: Big pharma. We saw it in Florida. Big pharma pumped in gazillions of dollars to try to slow everything down. They’re doing it state by state because it’s really affecting their sales. You know who else is behind it? The alcohol industry. The alcohol industry has actually taken this position, oh, this is terrible. We’re gonna get people addicted to drugs. Really? Like you haven’t addicted them to alcohol for the last 100 years? Pick it up.

Farron Cousins: What’s happening now in North Dakota is exceptionally disgusting because the Office of Management and Budget there … Well, to back it up a second, there’s proposition 3 on the ballot this year with legalized marijuana. The OMB comes out in North Dakota and says well, hold up. This is gonna cost you about $7 million. Are you prepared to pay that? Because when they did their analysis, they didn’t consider any of the money they would make off legalizing marijuana, they only considered the cost. And, they have $2 million allocated, they say, just to going through and expunging criminal records. $2 million to go through a computer program.

Mike Papantonio: We’re short on time here, but this is what’s so interesting about this story. They did the same thing on medical marijuana there, and they made the same kind of claim, oh, it’s gonna be $8.7 million. Well, at the end of the day, it was $360,000 was the real cost that was attached to that. It’s just that big pharma is feeding them this information. They have lobbyists all over North Dakota, selling this stupidity to legislators who most of the time are pretty stupid. They’re pretty easy to sell. But, it’s always big pharma, always the alcohol industry trying to stop medical marijuana or just the broad use of marijuana. I’m Mike Papantonio with Farron Cousins. You’re watching Ring of Fire, and we’re gonna be right back.