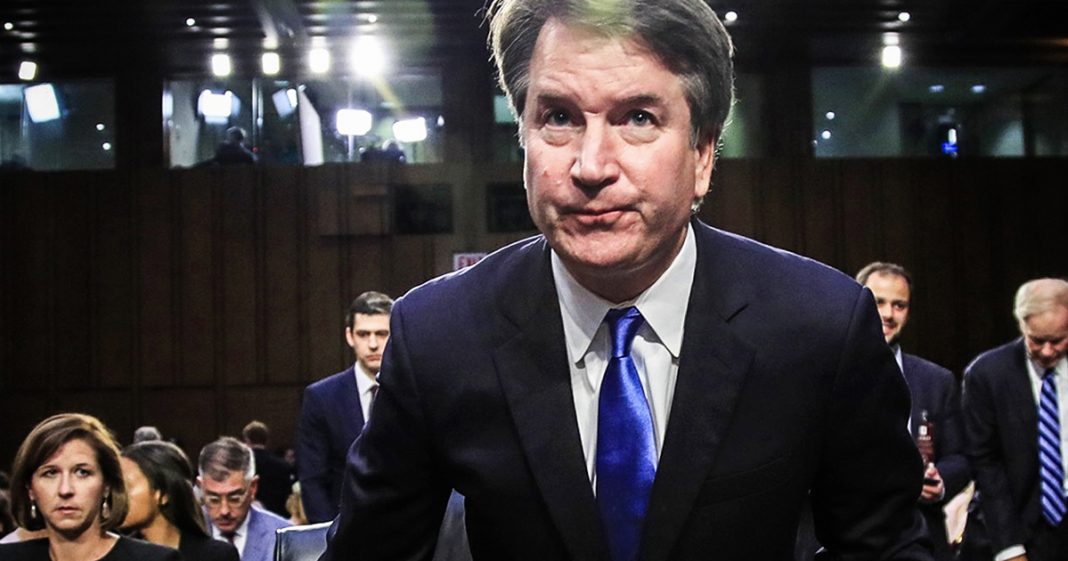 A very clear pattern of behavior has emerged with regards to Donald Trump’s Supreme Court nominee Brett Kavanaugh, as more and more women are coming forward to claim that the nominee engaged in inappropriate sexual behavior. A story by Ronan Farrow and Jane Mayer in The New Yorker combined with new allegations from attorney Michael Avenatti have made it clear that Brett Kavanaugh has a dark and disturbing history, and these issues need to be investigated before any further action is taken on the nominee. Ring of Fire’s Farron Cousins discusses this.

Well this was certainly a very interesting weekend, in terms of news stories. In fact, Sunday night proved to be more interesting than the entire rest of the weekend combined. We have multiple new allegations against Supreme Court nominee Brett Kavanaugh about sexual misconduct, and borderline sexual assault, that all came out Sunday evening. The first that needs to be addressed, story from the New Yorker with Ronan Farrow, Jane Mayer, who put this story together about a woman who claims that she was at Yale with Brett Kavanaugh, and at one point during a party, Kavanaugh allegedly went into the woman’s room. She had also been drinking, was trying to go to bed. He stripped down, put his genitals in her face, and began waving them around, right in her face. Another student who was at Yale at the time has also corroborated that he had heard that it was Brett Kavanaugh who did this. Now, the woman who claimed Kavanaugh did this actually spent quite a lot of time trying to remember clearly. She’s willing to say, “Yes, I was drinking, too. I wasn’t 100% sure at the time if it was him or not. You know, it has been 35 years, maybe my memory is not as clear.” But after thinking on it long enough, after speaking to this former classmate, they have concluded that they do firmly believe that it was Brett Kavanaugh.

The other allegation came from attorney Michael Avenatti, who says that he currently has evidence showing that Brett Kavanaugh was part of a group of boys back in high school or college, that would go around and give women, slip them these date rape drugs, I guess, then would have guys come in and gang rape them. He claims he has all the evidence and witnesses to back up these claims. So far, as of right this second, we have not seen any of that. Nonetheless, what’s being painted here is a very clear picture of a pattern of behavior for Brett Kavanaugh. We already know that this guy was part of a group in college that got disbanded because of their chant of, “No means yes, and yes means anal.” This man’s entire history is peppered with demeaning insults towards women, a very clear personality in which he doesn’t accept “no” from women, even without all of these allegations. But based on his history, it makes it all the more likely that these things these women have claimed have happened, did in fact happen.

Here’s an even more disgusting part of the story. It turns out Republicans in the Senate actually knew that this Ronan Farrow, Jane Mayer story was going to break soon. They were aware of it. They knew of the accusations, and that’s why they tried to fast-track this nominee last week. Why they tried to get Kavanaugh’s vote going as fast as possible before this story could come out. They knew about it, they said nothing, and they tried to fast-track him before the rest of us could learn the entire story. At this point, Kavanaugh has two options. You can either withdraw your name from consideration and be done with it, or you can allow these FBI investigations, along with Republicans in the Senate. They have to allow thorough FBI investigations to take place. Those are the only two options, because I can promise you, if they want to go around and not do those things, the investigations are eventually going to happen, and then in that case, if Kavanaugh was confirmed, he’s going to get impeached, and we’re going to remove a Supreme Court justice, and that’s going to be on you, Republicans. You knew about these things. You tried to hide them, and you tried to fast-track him before the rest of us learned about them.

Thinking about it over the weekend, I realized why Republicans are so hell-bent on making sure that Kavanaugh gets this nomination. Because it’s not just about the fact that they really like this guy. Has nothing to do with that. It’s about the fact that they needed a victory for the conservative base before the mid-terms, and they’re not going to get it. Even if they confirm him at this point, they’re not getting a victory from this. The majority, the vast majority of the American public, according to the latest polls, doesn’t want this guy on the Supreme Court. So Republicans are now between a rock and a hard place. Either you confirm the guy that everybody hates, and risk his impeachment a few months down the road. He’s actually already at risk of being impeached of the current seat he’s in based on these allegations. Or you admit that you screwed up, you pushed the wrong guy, you backed the wrong guy. The President nominated the wrong guy, and you withdraw the nomination.