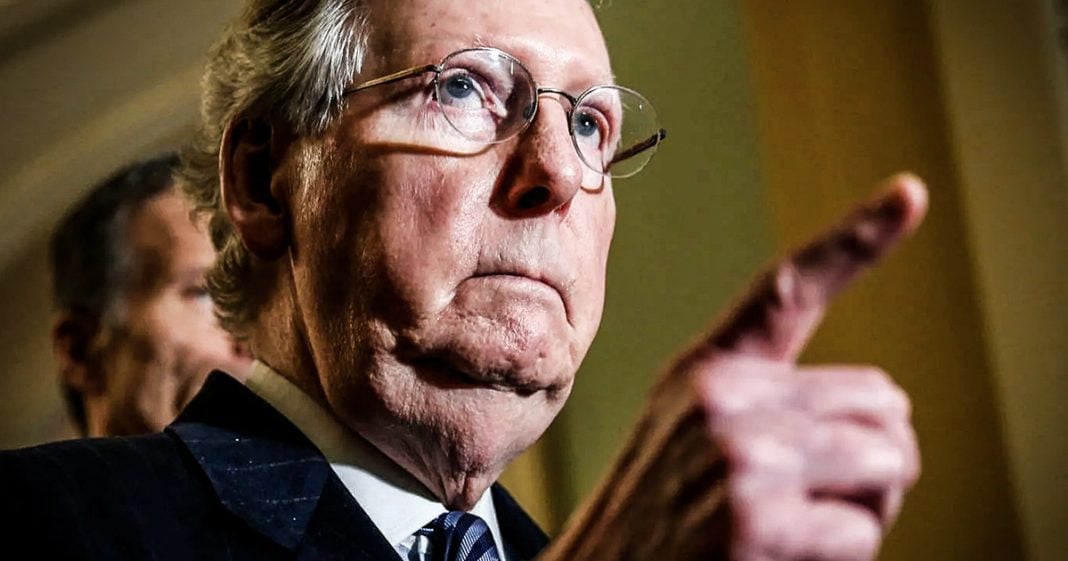 Mitch McConnell is not happy about Donald Trump’s Friday tweets about Brett Kavanaugh and his assault accuser Dr. Christine Blasey Ford, and he made sure to let the President know that. But here’s the thing – as bad as Trump’s tweets were, they were no different from what all of McConnell’s other Republican friends in the Senate were saying, as well. Ring of Fire’s Farron Cousins discusses this.

This past Friday Donald Trump decided to jump into the fray trying to defend his supreme court nominee Brett Kavanaugh. And he did it the only way he knows how, to get on Twitter and start attacking the woman accusing Kavanaugh of sexual misconduct, Dr Christine Ford. His Tweets were so bad and so damaging for his own nominee and the Republican Party that Senate Majority Leader, Mitch McConnell had to get on the phone with Donald Trump, according to reports, that afternoon and say, “Please stop tweeting about this because you’re making the situation so much worse.” Mitch McConnell, the man without a backbone, a spineless republican suck up actually decided to get on the phone and say, “You’re making things worse. Could you please stop?”

Now, trump sent out several tweets about Dr Christine Ford, the woman accusing Kavanaugh of sexual misconduct, but I’m just gonna read one. This is the most disgusting. It is, “I have no doubt that if the attack on Dr Ford was as bad as she says, charges would have been immediately filed with local law enforcement authorities by either her or her loving parents. I ask that she bring those filings forward so that we can learn date, time and place.”

Now, the reason that’s so disgusting is because he’s trying to play it both ways and make it sound like, “I’m not saying if she … I mean, if she has those bring them forward and we’ll evaluate them.” But he’s also saying, “If it had happened she would have filed a report and she didn’t, so obviously it didn’t happen.” He is sitting there, as he has done so many times, including with the 19 plus woman who have credibly accused him of sexual misconduct, trying to act like it’s a lie. But he’s trying to do it a little more diplomatically than usual, which also leads me to believe that maybe Trump himself isn’t the one who tweeted this out.

Nonetheless, Mitch McConnell had to get on the phone and say, “Could you please not say these things. We’re already between a rock and hard place here. We don’t need you making it worse.” Well guess what Mitch, Donald Trump was literally saying the exact same thing that the rest of your republicans on the senate judiciary committee have already been saying. Lindsay Graham said that it doesn’t matter what Dr Ford testifies and says during her hearing. It’s not gonna change his vote. I mean, your own buddy Lindsay Graham said, “No matter what she says, I don’t care. I’m still voting to confirm him.” Other republicans have said, “This is obviously a democratic plot. This didn’t really happen. They’re wasting our time.” And you’re just only mad at Trump? You’re not standing up to anybody. You’re standing up to the one guy that you don’t have to deal with on a daily basis.

How about you go tell the other republicans on the judiciary committee that what they’re saying about this woman and these accusations is absolutely insane, and they need to shut their damn mouths until she is allowed to come in and give her testimony. Or better yet, tell them to shut their mouths until after we get an FBI investigation into this thing. You can’t just find one guy who works in a different building, Donald Trump, and say, “Oh, you got me so mad. I’m gonna … I’m gonna stand up to you. Could you stop making things worse,” and then ignore the guys working down the hall from you who are making things so much worse for you.

See, Mitch, you thought this was gonna be a winning issue. You thought this was gonna help you in the midterms by being able to go voters and say, “Look, republicans gave you two Supreme Court nominees in a year and a half, that’s remarkable.” But instead, you failed. And we know, according to reports for the last year and a half, that you’ve been working with the Federalist’s Society to feed these nominees to Donald Trump. So, yeah. Brett Kavanaugh’s failure is your failure. If you wanna be mad at somebody about all the horrible things republicans are saying right now, you need to start with yourself because everything that happens from this point forward, with regards to Kavanaugh, is 100% on you Mitch. You did this. You live with it.