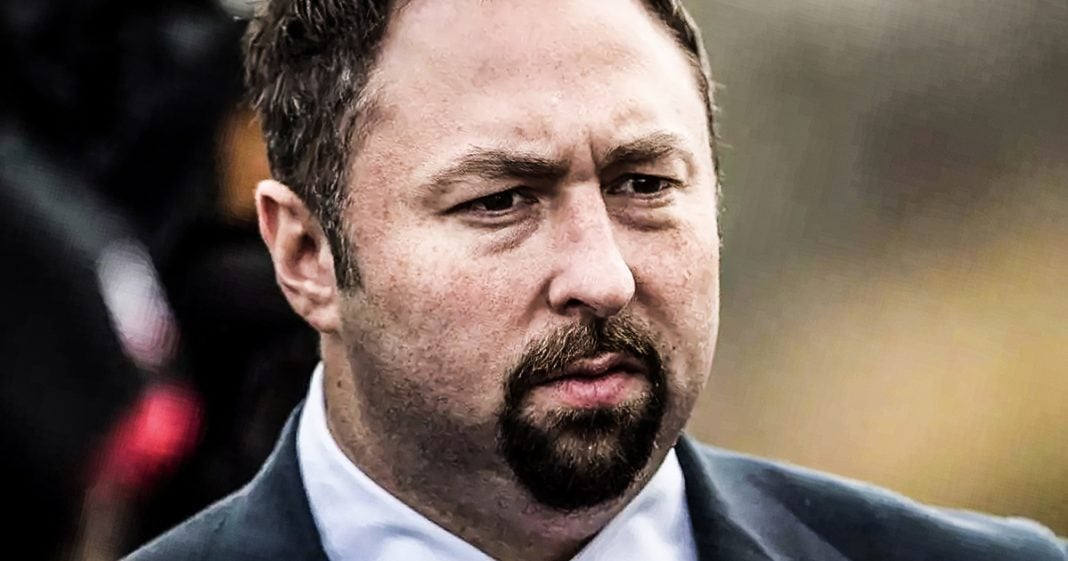 According to recent court filings, former Trump campaign aide Jason Miller nearly killed his mistress several years ago after secretly slipping her abortion-inducing drugs after he found out that she was pregnant. These court filings are related to Miller’s current divorce hearings, but they show just how hypocritical and disgusting the current leaders of the Republican Party truly are. Ring of Fire’s Farron Cousins discusses this.

I know it seems like Brett Kavanaugh, Donald Trump’s Supreme Court nominee is actually in the running for worst human being on the planet right now, but before we hand him that title, you need to understand the title of former Donald Trump campaign aide, Jason Miller. Miller’s currently going through a divorce hearing with his partner, A.J. Delgado, and what’s come out in those divorce hearings, in the paperwork, is that Miller actually had an affair, and when his mistress became pregnant, they had actually met at a strip club down in South Florida, when she became pregnant, he unknowingly slipped her an abortion-inducing drug in a smoothie that almost killed her. Almost put her in a coma, left her in the hospital for several days just because he didn’t wanna have to deal with his other wife or his wife, I should say, finding out that he got his mistress pregnant. Jason Miller, again, former Donald Trump campaign aide, almost killed a woman because he didn’t want her to have his child. Now I thought Republicans were totally 100 percent against abortion.

I thought that was like number one on their list of things to get rid of in this country, right after textbooks. And here we have a guy who is heavily involved in Republican politics, involved with the Trump campaign, worked at a Republican consultancy agency, and he slipped his mistress an abortion-inducing drug that almost killed her. Here’s what happened, this is according to the court filings, that’s what all of this is based off of. He went over to her house early one morning, and he brought her a smoothie which she drank. She thought he was just being nice like, “Oh, hey, good morning, here’s a smoothie.” She didn’t know that the smoothie had chopped up in it this abortion-inducing drug. She drinks it. Little while later, falls severely ill. She does end up having a miscarriage as a result of this, ends up in the hospital for at least two days, almost went into a coma, doctor says she’s lucky to pull out of this, and this is what the Republican party is today, folks. They don’t actually care if we outlaw abortion.

They’re not actually concerned about overturning Roe vs. Wade because they’re an anti-abortion party. What they are is a party that wants you to think that they’re anti-abortion. We have seen stories, not always as disgusting as this one, but we have seen stories like this emerge over the years, and we will forever see stories like this emerge over the years that prove just how hypocritical Republicans truly are. The big difference though is that when a Democrat is exposed as being a massive hypocrite, we typically disown them. We kick them out. We say goodbye forever, and they disappear. John Edwards, Anthony Weiner, Al Franken, regardless of what you thought about Franken being excommunicated or kicked out of the Senate or whatever, we did what we felt was right. We haven’t heard anything from John Edwards in what, a decade now? And yet here we have people, and after Miller left the trump campaign, he went back to being a Republican consultant, appears regularly on CNN as well to give Republican talking points each day. And this is what they do behind closed doors. This is the kind of people they are.

These are the kind of people that make up the real heart of the Republican party. It’s not the voters, it’s the disgusting people like Miller who help influence policy and influence politicians, and this is the kind of stuff they do when they think nobody’s looking.