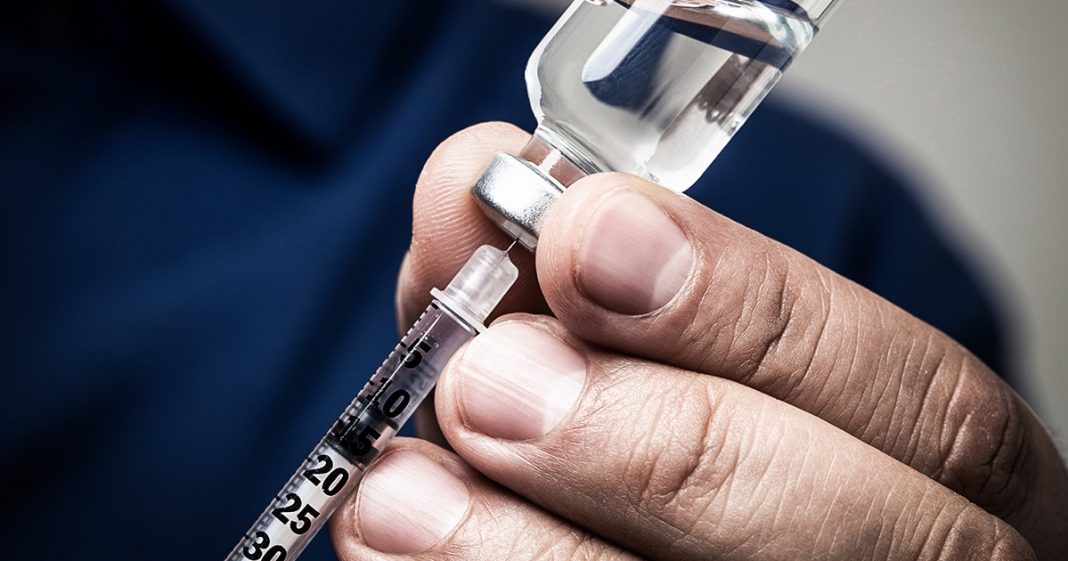 According to new reports, more and more Americans are dying each year because they can’t afford the rising costs of insulin which is necessary for many diabetics. The cost of insulin has more than doubled in the last few years, placing the treatment just out of reach for too many citizens. Ring of Fire’s Farron Cousins explains how our greed-driven, for-profit healthcare system is killing American citizens.

A few years ago it was about $24 or $25 per month co-pay for insulin. Now that co-pay, even with insurance, has risen to over $80 in some areas, which obviously is way more than double, but that’s about an average of what it is. If you don’t have insurance, guess what? You’re going to be paying roughly $1,300 every single month for your insulin, according to these new reports.

Now, insulin is not the only drug guilty of this. We’ve seen it with EpiPens. We’ve seen it with all kinds of drugs across the board, heart medications. I mean, things people have to have or else they die. These aren’t vanity medications. It’s not something that, “Oh, this will make your skin look a little better.” It’s not, “Oh, maybe this will stop your foot cramps every now and then,” something that, yeah, you’ll live without. No. These are medications that people have to have or they die. It’s one or the other. You either take the medication or you die. That’s what insulin is. It’s a hormone your body produces. If you don’t produce it, you have to get it in the form of a prescription, and if you don’t get that, you’re dead. It’s as simple as that.

These drug companies are just upping the price on it for literally no reason other than greed. In fact, Massachusetts, right now, has filed lawsuits against three major drug companies because of their price gouging. They cannot find any kind of legitimate reason why these companies would be jacking up the prices on a drug that was developed decades ago, has obviously paid for itself. There’s no more research and development into insulin. I mean, I’m sure there is to an extent, new delivery systems, new testing systems, blah, blah, blah, but the drug itself hadn’t changed. You don’t need to be spending billions of dollars every year to make insulin different. You got it. You’re done.

What they’re spending money on is marketing, because there’s competitors. They want to make sure their insulin sells more than Company B’s insulin, and so they have to spend more in marketing. And then, to recoup those costs, they have to up the drug prices. And now, Massachusetts is saying you all upped your drug prices in, basically, a price fixing scheme so that everybody would remain competitive and everybody would get a higher profit, and you can’t do that. That’s illegal.

We need more of these lawsuits. We need lawsuits like this on just about every drug that’s available to American citizens today. There is no reason why we should have to pay $1,300 for a drug that’s been around for decades just to stay alive. That is absolute insanity, and it doesn’t happen anywhere else on the planet. It doesn’t. You can’t find a single other country where they’re going to have to pay those kinds of numbers for a drug that’s already been on the market for well over 50 years. That is a uniquely American problem, because we happen to have a uniquely greed-driven healthcare system here in the United States.

The only remedy for that is to have the government force these drug companies to lower their prices to something more manageable. Negotiate prices with them if you have to. But the only reason we’re paying so much for our drugs here in the United States is because we’re one of only two countries on the planet that allow drug companies to have direct-to-consumer advertising for prescription medicines. They spend billions of dollars on that every single year, and they want those billions of dollars back. So, if they can’t get it by increasing the number of prescriptions, they’ll just increase the cost of those prescriptions.