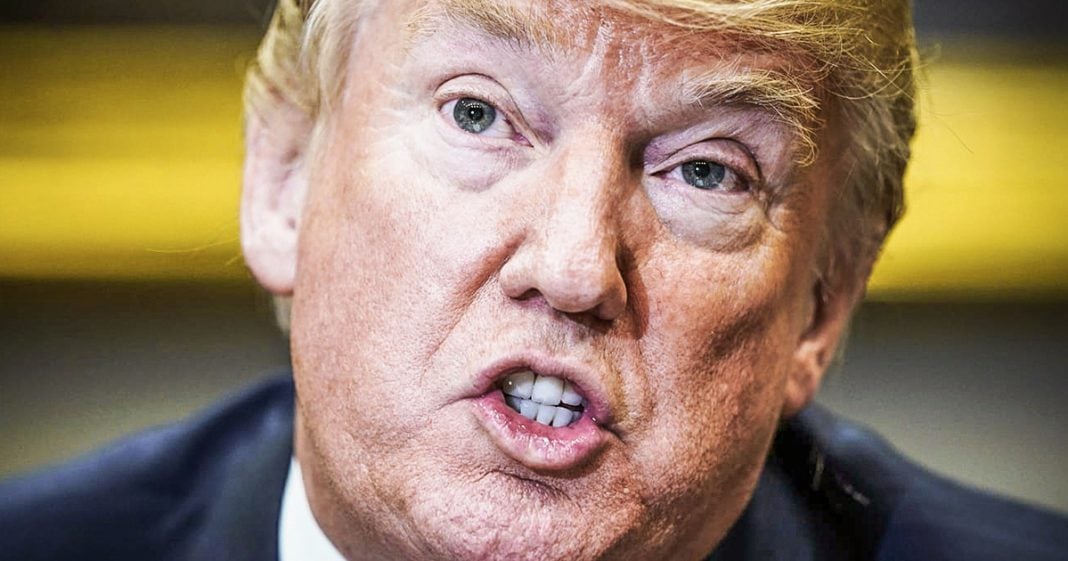 For over a year, we’ve been warned by some of the best and brightest in the mental health field that Donald Trump’s mental deficiencies and how they make him unfit to be President. But to date, we’ve failed to act on all of these warnings, even as they continue to pile up. Ring of Fire’s Farron Cousins explains why these issues need to be discussed and why we can’t let this become the new normal.

Within a few months of Donald Trump taking office last year, we started to get warnings from mental health experts all over the United States, and those warnings were that Donald Trump is not mentally fit to be the President of the United States. Since those initial warnings came out, those mental experts, psychologists, psychiatrists, everyone in the mental health field willing to speak out, they’ve repeated the same thing. This man is exhibiting symptoms that should immediately disqualify him from running the country. Yet, here we are September 2018, and we’ve just not done anything about it. That, to me, is one of the sickest things about this entire administration. That coupled with completely ignoring all the women who have credibly accused him of sexual misconduct.

We’re also ignoring all of these doctors and experts who have told us repeatedly, put out a very popular book about just how psychotic, sociopathic, narcissistic this man truly is, and why the traits that he has should cause us to invoke the 25th amendment to get him out of office.

Now, as I’ve explained before, the 25th amendment actually does provide the president the opportunity to prove that he is mentally competent enough to serve as the President of the United States. But it also has to be invoked by the vice president and either members of the cabinet or the Senate itself. That’s not going to happen. Mike Pence desperately wants to be the President of the United States, and he firmly believes that god is going to make something happen to Trump so that Pence can take over. But Pence isn’t willing to do what’s necessary to get the job. Because I guarantee you, if they actually banded together, invoked the 25th amendment, there is no way that Donald Trump could pass this rigorous mental health screening that is required to prove that he is competent enough to be the president.

If you need examples of Donald Trump’s incompetence, we can just look at what’s happened in the last couple weeks. This week, as part of the response to Hurricane Florence, when Donald Trump made the trip to North Carolina, he handed a group of people food and said, “Have a good time.” They were headed back to nothingness. Homes destroyed, some still under water, and he says, “Have a good time.” He told another person, “Well, hey, at least you got a nice boat out of it.” That’s not normal. A normally functioning human being wouldn’t say something like that. A psychopathic billionaire absolutely would. But we don’t want a psychopathic billionaire running this country, and if you do, you probably need to have your head examined as well because that’s not normal.

That’s the point of all this, we cannot continue to normalize the behavior of the President of the United States because it is so far from normal. This man can look at reality and tell us that it’s not actually there. He told people in a speech not that long ago to ignore what they see with their eyes or hear with their ears because it’s not that way. He’s telling others to deny reality in the same way that he denies it. Anytime he’s presented with unpleasant information, he just says it’s not true. The death toll in Puerto Rico. His lagging poll numbers. Things that are hard data evidence, he still says they’re not true. Climate change. So why should we take him seriously when he doesn’t even take reality seriously? But more importantly, why should we let him continue to demean the office of the President of the United States when there are very easy remedies that can be invoked to get him out of office, and then put it on him to prove that he is mentally competent, something that we all know this man’s not capable of doing.