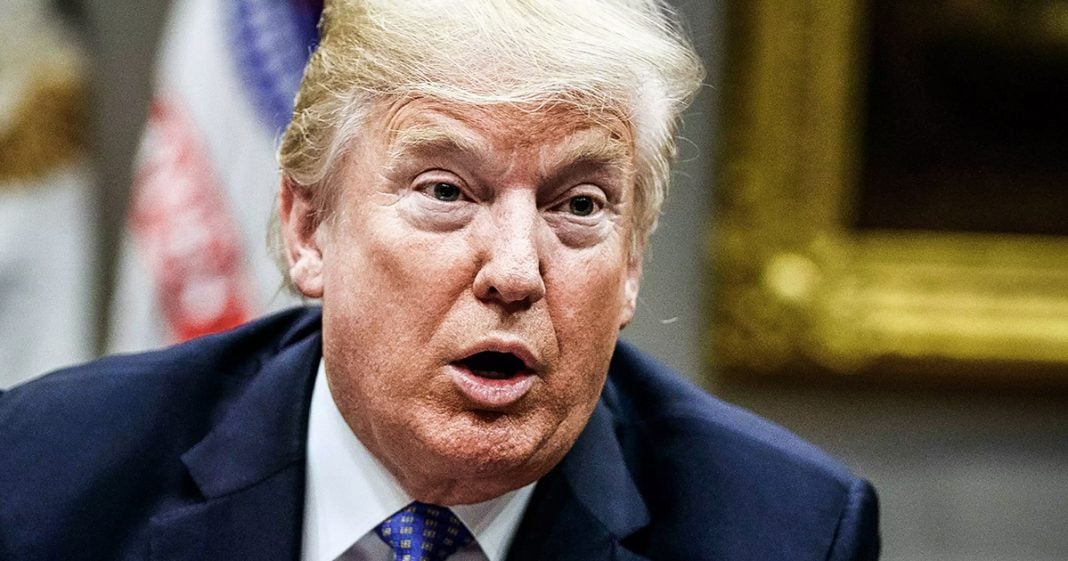 Donald Trump’s angry outburst about “not having an attorney general” earlier this week mean more than we think, according to The Washington Post. The president is feeling unprotected and alone, the Post reports, and as the investigations into his campaign begin closing in tighter around him, we can expect even more angry outbursts and impulsive behaviors. Ring of Fire’s Farron Cousins discusses this.

Donald Trump is feeling increasingly angry and unprotected in the White House. Now, not unprotected in the sense that the Secret Service isn’t doing their job. Donald Trump’s not fearing that anything bad is going to happen to him that way. He feels unprotected from his own staff, unprotected from the people that he has surrounded himself with by his own choice. I mean, he chose everybody that’s working around him. But now he realizes that he can’t trust any of them because, as of right now, they still haven’t found out who wrote that op ed from inside the White House.

Add to that Bob Woodward’s book, which has already now sold over a million copies, and you get a really freaked out President of the United States, which is what we’re dealing with right now. Or at least that’s what “The Washington Post” told us earlier this week and from what we’ve seen from the president in terms of his behavior. I think we can 100% agree with that. This man is not behaving rationally. He’s not behaving normally and his lies, the frequency with which he lies, is actually increasing by the week because he’s so freaked out and he doesn’t know what to do, who to turn to, or where to go.

Now, “The Washington Post” article that I referenced talks about this, talks about Trump being angry, being more isolated, feeling unprotected, and it’s not just their speculation, either. Members, current and former, of the Trump administration have also confirmed this. One of them happens to be Steve Bannon. Steve Bannon has admitted that Trump, right now, is afraid. He is scared. He is confused. He doesn’t know who to trust. When you add all those things together and you get a president, an already unhinged guy like Trump who’s now even angrier, even more desperate, even more isolated, that is a bad combination.

Those are things that he actually don’t want to be happening to this guy right now. Of course, that’s only because we don’t want him to do something drastic, tweet us into a war, go drop some bombs and kill some civilians. We don’t want that kind of reaction from him. But at the same time, there’s no sympathy for this man at all because the reason he’s feeling this way is not just about that op ed or the Woodward book. It’s because he understands that the walls of these investigations, all of them, are closing in on him. He’s learned in just the last 10 days that both Manafort and Michael Cohen have flipped on him, and that they’re giving information about him to Robert Mueller, not about his son, not about anybody else, about him personally.

I’m sure they do have information about the others that they’re also sharing, but this is the first time that we’ve ever heard that somebody is specifically giving information about Donald Trump himself. They got his CFO. They got his other buddies. They’ve all flipped. Trump knows that his days in the White House are probably numbered at this point and that’s why he’s feeling like this. This is why his buddies are worried about him. They’re not just worried about him, they’re worried about what he’s gonna do, because at the end of the day these people also don’t wanna see a catastrophe on our hands because Donald Trump rage-tweets us into World War III.

They don’t wanna die, either, in a thermonuclear explosion at their home. Yeah, they’re horrible people, but they still wanna live, too, and they don’t wanna see this country, I think, go to hell. But Trump, as these investigations close in, is going to get even more desperate. He’s going to get angrier and he will eventually start taking drastic measures. Earlier this week in an interview, he said, “I have no Attorney General. It’s very sad,” referring to Jeff Sessions and the fact that Trump considers him useless even though Sessions has actually carried out every single thing Trump has wanted him to do except for unrecusing himself from the investigation.

Meanwhile, he’s locking kids away in cages left and right just for not being white. What more could Trump want from the guy? Well, maybe a little more loyalty ’cause that’s all that matters to this man. He is eventually gonna fire Jeff Sessions. That’s a given. While I will disagree with his reasoning for firing Jeff Sessions, I will not feel sorry for Jeff Sessions ’cause he is an evil son of a bitch and I don’t wanna see him in the federal government. He’s gonna fire Robert Mueller. I think that’s also a given. Sean Hannity told us he would. He’s laying the groundwork this very week by trying to release those classified documents in an attempt to undermine Mueller.

But none of that is going to matter. He can fire as many people as he wants, he still has to replace them. That’s required. He’ll have to appoint a new special prosecutor. He can’t stop that investigation. He can only stop the person currently running it. When the next person comes in and sees these testimonies from Michael Cohen, from Manafort, Weisselberg, everybody else, there’s not much they’re gonna be able to do to bury it. Trump understands that, I think, I would hope, but that’s not gonna stop him from doing everything possible to at least delay the investigations a little bit by constantly firing the person in charge of it. It’s a nice delay tactic, but it will not stop the inevitable.