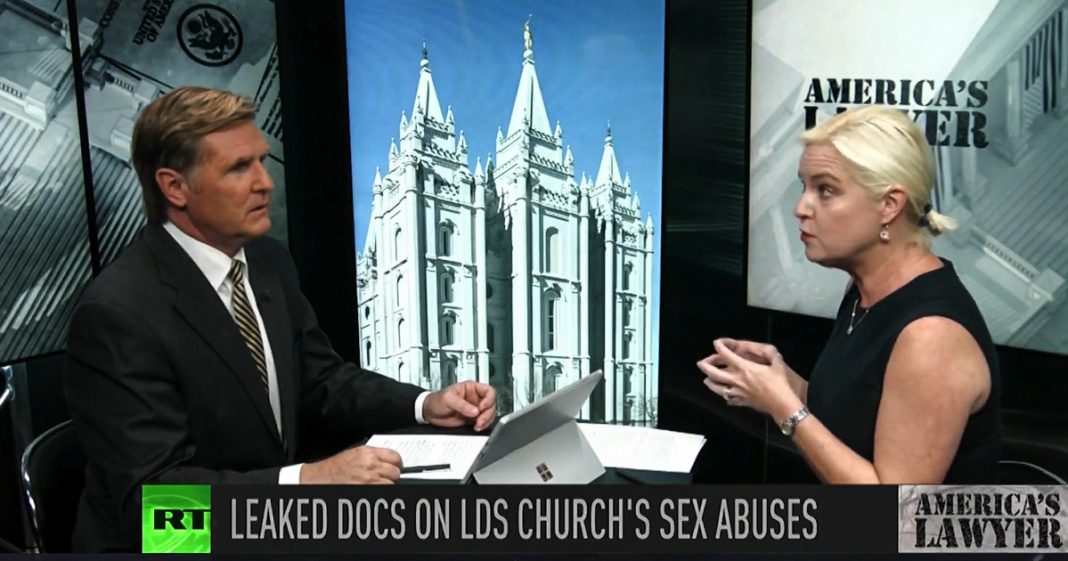 Mike Papantonio: Mormon leaks, has just published a 2012 document labeled, attorney work product, from Kirton McConkie. He’s a Salt Lake City based, law firm, summarizing legal investigations of abuse, involving members of the Mormon church. Joining me to talk about this is Mollye Barrows. Mollye, we just finished doing a series of stories on the Catholic church.

We’ve known about this type of thing with the Mormon church. It hasn’t been that public. I really think the Mormon church has a better PR team. They’ve been able to keep this quiet for an awful long time. Although, this has been … There’s a great book. It’s called, Under The Banner Of Heaven. It talks about the development of the Mormon church as it moved out west, but it talks about some of these issues in the very early days. This document, attorney work product, tell us about it.

Mollye Barrows: Well, this was leaked to Mormon Leaks. It is a legitimate document, they said comes from a reliable source. The person who runs Mormon Leaks, reached out to the law firm to verify, if this was indeed their document. They verify that it was. They said, just redact names. Basically, it outlines seven cases, where the law firm essentially lists accusations against members of the Mormon church, whether they were missionaries out in the field, or they were leaders.

They were accused of a variety of accusations. A lot of them centered around child sex abuse. One missionary was accused of fondling a 15 year old girl. Another was accused of messing with an eight year old child and in all these cases, there was no effort made at all to report it to authorities. These people were just moved. These missionaries were moved and sent back home. They felt like, in the notes in this report, that this was the best situation, this was the best way to handle this.

Mike Papantonio: Yeah. There’s no difference. If you take this case, and you look at the Catholic church, you look at all the other, the USC, the colleges, it’s always about protecting money.

Mike Papantonio: It’s not just … To protect money, you have to protect reputation. To protect reputation, you can’t have these stories get out. What ends up happening, the same thing we see with the Catholic church. They have big influence. Mormons have massive influence out there and nationally actually, more and more nationally. This strikes me. No where does the document indicate that any of these cases were referred to the police.

Mollye Barrows: Now … It goes back to the point that you just made about the similarities to the Catholic church. Basically, they wanna treat accusations of child sex abuse, as a problem that can be overcome with prayer and forgiveness as opposed to a crime. It goes to the greater system and structure of power that they’ve set up within their religious institutions, to protect the institution and not the victim. They basically say, “We’re your intermediary to God. We are setting ourselves up with God. We’re above the law.”

If you are a child of … In many of these lawsuits, by the way that have been going back to 1998 against the Mormon church. Victim after victim of child sex abuse has come forward and filed suit against the church saying, “You guys systematically told us you were handling this, but you didn’t. You didn’t report it to authorities. You told us that we didn’t necessarily have to report it to authorities, that the person had been forgiven, that they were working to overcome their problem.” There’s no overcoming pedophilia.

Mike Papantonio: Well no. It’s a cultural issue with the Mormon church, just like it is the Catholic church.

Mike Papantonio: In politics there are a lot of politicians, that can bring to bear whatever they wanna do in politics.

Mollye Barrows: Or friends within the church themselves, who are being asked to police these very people that are being accused of molesting children. In some cases, you had members of the Mormon church, leaders themselves, who are molesting their own children in some of these lawsuits. These children were being told, “Oh this is being handled. You don’t have to worry about it.” It never occurred to them to go to the police. There are people within the Mormon church, who are working to get those policies changed, and that there’s mandatory reporting.

Same thing USC did for example, when we caught the gynecologist that was abusing so many people. The students would go to the college and they would say, “We have this problem.” They’d say, “Well, we’re glad you came here. We gotta send you now to the committee. You’re gonna sign a document. It’s all gonna be disappeared.” That’s the same thing that happens here, in a very well organized kind of way with the Mormon church.

Mollye Barrows: Absolutely. The victim is left basically with no support, especially if members of their family or their friends are all attached to the church as well. They’ve been set up to not be believed for one, or if they are believed, oh, well the problem’s gonna get taken care. You’re not given any kind of support to go outside of the church to get this crime, in many cases, addressed.

Mollye Barrows: It’s more than a problem. It’s a crime.

Mike Papantonio: Yeah. You really, wanna freak out about some issues in the Mormon church, go read, Under The Banner Of Heaven. It is terrifying.

Mollye Barrows: I will check it out. People need to know.

Mike Papantonio: Yeah. Thank you for joining me Mollye. I appreciate it. This is a story that they’re gonna continue building.