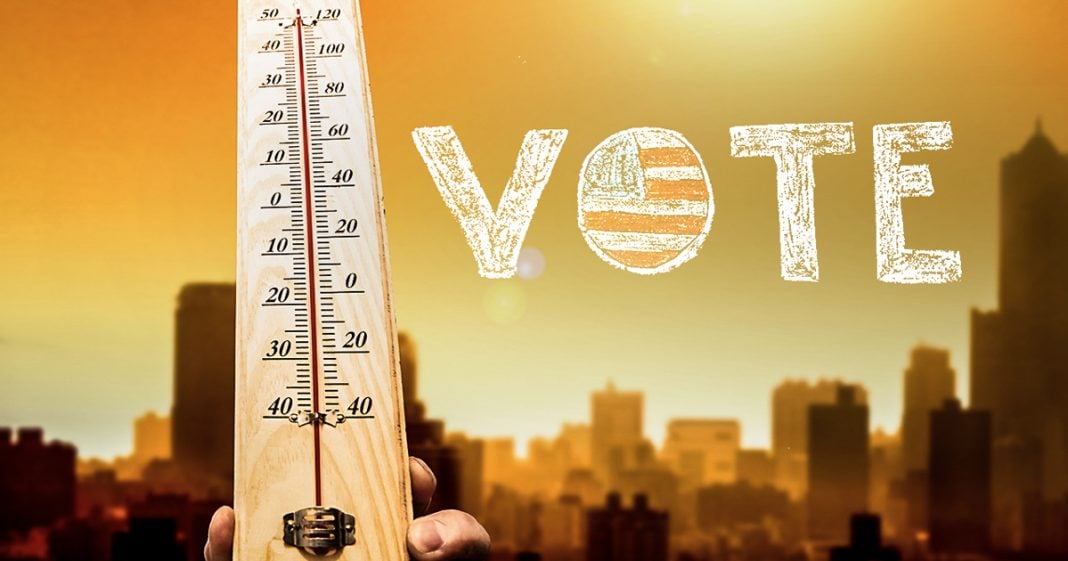 Renowned climate scientist Michael Mann had an op-ed in The Guardian last week where he explained the growing threat of increasingly powerful storms and climate change-related weather events. But he lands the story on the simplest way that people in the United States can work towards a better future – just vote. There are obviously other steps that have to be taken from there, as Mann has explained, but it all starts with removing politicians who want to move the US backwards on energy and climate rather than forward. Ring of Fire’s Farron Cousins discusses this.

Right now, we have American cities in the Carolinas that are currently underwater as a result of Hurricane Florence and the torrential rainfall and sea level rise that came along with that storm, and it’s not getting any better right now. It will eventually, hopefully, but right now, it’s about as bad as we’ve seen in a long time, but here’s the thing. These kinds of storms, like Florence, luckily it slowed down to a one before it made landfall, whereas it could have been making landfall as a four, a very powerful four, but it downgraded, but this is the new normal. We saw it last year with Maria, with Harvey, with Irma, now with Florence. It’s not just the new normal. They’re actually getting worse. Normal’s gone, out the window, and that’s actually what renowned climate scientist Michael Mann told people in an op-ed for the Guardian last week, an op-ed you can find the link to it in the video description here.

I strongly recommend everybody take the time to read through that op-ed, and after you’ve read it, I want you to reread the final paragraph of it, because it is in that final paragraph that Michael Mann tells us the most powerful thing that anyone in the United States can do to help protect the environment and to help basically do what we can to fight climate change. If you don’t want to read it yourself, don’t worry. I’ll read it to you. “We must transition away from fossil fuels toward renewable energy even more rapidly, and we must elect politicians who will support such efforts. In the US, there’s an opportunity to do so in less than two months now in the upcoming midterm elections, where we must elect politicians who support enlightened policies on energy and climate, and vote out of office those who don’t.”

Now, there’s a lot of steps that need to be taken in order to reduce our emissions, help combat climate change effectively, get renewable energy going. All of those are things that need to be done. We have to fix factory farming, but nothing, none of that can even be done if we have a government controlled by people who routinely deny that science is real. That’s the point that Michael Mann is trying to make there. Dr. Mann understands that. He knows that as long as we get these politicians who are funded by fossil fuel interests, who go to work on the Senate floor and throw a snowball and say, “If global warming’s a thing, how is there a snowball here? Huh? Think about that.”

As long as we have morons like that in the US Senate or the US House, we will never be able to get any kind of meaningful action on climate change ever, and even Obama. I mean, look, he did talk a great game on climate change. He did some great things on it. He also took a couple steps backwards on the issue. I mean, oil drilling, offshore drilling in the United States hit a record pace at the time under his administration, but at least we were also putting other things in place to help control emissions from power plants, trying to protect waters and streams.

Meanwhile, the current administration, regardless of what you think of Obama, the current administration run by Republicans is trying to reduce fuel emission standards for automobiles, basically bringing back the area, era, excuse me, of those gas-guzzling SUVs. They’re trying to make it to where power plants can put more mercury and other toxins into our air. They’re trying to actually allow more drilling on public and national lands and national parks. They sold off those areas, and then the woman who was in charge of selling them off went to work for one of the oil companies who bought them.

This has to stop. There is a very clear choice in this year’s elections. You have a party, may not be perfect on the issue of climate, but at least they understand that climate change is real, that human beings are making it worse, and that we need to do something about it. That happens to be the Democratic Party. Then you have the other party who, a majority of their voters admit climate change is real, that humans are causing it, and that we should do something, but the party leaders, the elected officials from that party, keep telling us, “It’s not real. Science doesn’t know,” or, even worse, “I’m not a scientist, so let’s just not pay attention to it.”

Well, how about you listen to the scientists? Not just the elected officials, but the public. When we have somebody who knows as much about climate change as Michael Mann telling us that the biggest thing we can do is vote, that’s an idea that you need to keep in your back pocket at all times, because it’s not just about climate change, either. You want to do something about healthcare? Vote. You want to do something about teacher pay increases? Vote. You want to do something about anything in this country? The first and most important step you can do is to make sure that you get out there and vote, because if you don’t, it’s not just you that’s not voting. Maybe your friend doesn’t vote. Maybe your neighbor doesn’t vote, either. Maybe the rest of your family’s not voting. Those numbers add up pretty quickly, and we saw back in 2016 what happens when nearly half of the country decides to stay home and vote. That’s what got us the government that we have today.