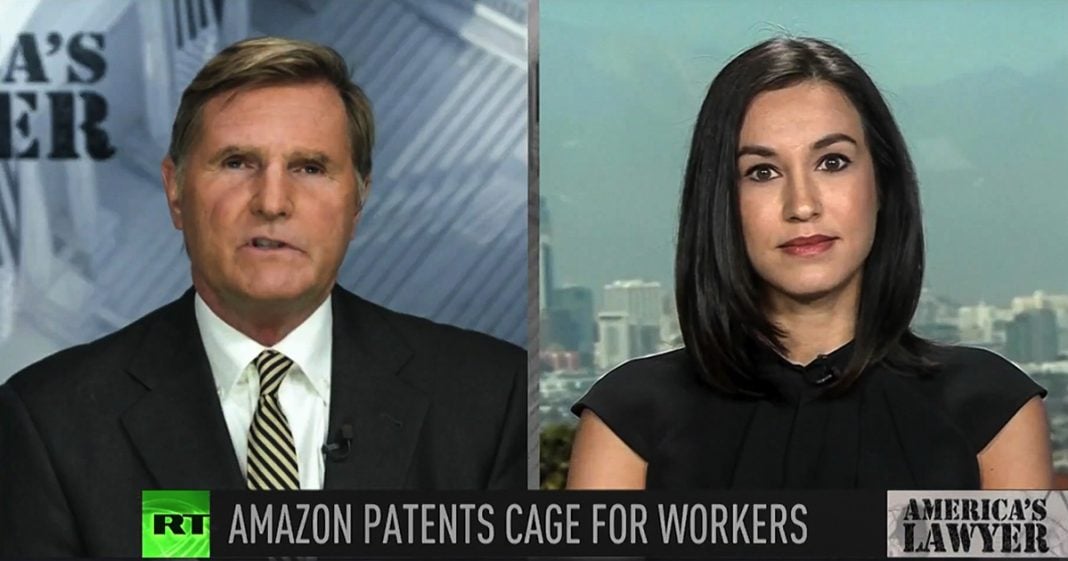 Mike Papantonio: A new research paper has highlighted an Amazon patent showing how to transport warehouse workers inside a cage. Yeah, you heard it right, transporting workers inside a cage. The patent was granted in 2016, but it’s only now making news given the wider debate about how Amazon treats people who work in their warehouses. Joining me to talk about this is correspondent Brigida Santos. Brigida, this story, it makes you actually giggle a little bit because it’s so ridiculous, but the truth is Bezos really wanted to do this. When was this patent applied for, and was it ever used by Amazon? I see it in the future, whether it’s been used yet or not.

Brigida Santos: Amazon first filed for the patent in September of 2013. Now the blueprint reads, quote, “Disclosed herein is a human transport device to transport a user in an active workspace. The device may include a platform to support a user, an enclosure to surround the user, a drive subsystem to power the device, and a control unit to control movement in coordination with a mobile drive unit.”

Now, the company says its robotic engineering team designed the cage to protect workers in warehouses as they get more crowded with robots, but after much criticism, Amazon says the concept was a bad idea. They have now dropped it. As, as you know, Mike, has a track record of inhumane treatment when it comes to its workers who have described working conditions as being slave like. Workers have reported being denied overtime pay. They’ve reported that bathroom breaks are timed so short that they’ve even gone to the bathroom in bags and bottles just to meet the company’s unrealistic targets. And, of course, CEO Jeff Bezos became the richest man in the world off the hard labor of these often low-wage workers. So it’s very sad to see them being potentially put in cages or at least seeing blueprints for a cage.

Mike Papantonio: Well, let me tell you something. You may or may not know, but our law firm hammered Walmart years ago for having workers work off of the clock and basically, the company was stealing wages from the worker. That seems to be one of the themes that keep reoccurring here. I predict a lawsuit’s going to come out of that. But really, the ugliest part was that it wasn’t just one or two people that were saying, “Well, they wouldn’t give me a bathroom break. They made me work off the clock. Horrible conditions.” It was person after person. We’re talking about huge numbers of people that were saying this is true.

I got to ask you, Lindsay Campbell, an Amazon spokesman, said speculation about the company’s use of the patent was misguided. How was the patent misguided? I mean we could go on forever from a human analysis about why this may be misguided to put a human being in a cage, leave them in the cage all day, and move them up and down an aisle so they could take items from that aisle and ship them to somewhere America.

Brigida Santos: Amazon spokespeople consistently claim that any criticism is misguided and that the company does what any other company does in streamlining time-consuming tasks and by trying to make the workplace more productive and safe. But, of course, it’s misguided that they’re even creating this in the first place because I just don’t understand how they can possibly think that putting people in cages would go over well.

Mike Papantonio: Look, here is the comparisons. You’ve got Bezos, the richest man in the world, trillionaire, and you’ve got workers who, at this point, there’s story after story, workers are having to apply for public assistance because they don’t have enough money. They don’t even have money to be able to pay for basics like food and shelter and medical. So you’ve got this gazillionaire that’s determining that, yeah, we’re going to let our workers become wards of the state.

What does that mean? It means taxpayers are having to supplement Amazon the same way that taxpayers are having to supplement Amazon for the cost of mailing packages all over the country. Amazon’s paying far below what they should be paying in the same way that they’re not paying their people enough. And so at some point, this is going to blow up. It’s not just going to go away.

Amazon’s patents often spark assumptions about Amazon’s technology and business plans. Any other patents about this company that you want to talk about?

Brigida Santos: Yeah, there are numerous, but this year, Amazon patents were also approved for wristbands that track the movements of warehouse workers while they work. Now these wristbands reportedly buzz when they sense that workers are moving their hands to the wrong item, and critics accuse Amazon, of course, of trying to control workers’ movements and of violating employee privacy by tracking their every single move.

Brigida Santos: Now last year, Amazon also filed a patent for delivery drones that would analyze consumer’s homes by looking at them in order to sell these consumers more products. And, of course, Congress can grant inventors exclusive rights on their patents for a limited timeframe under the patent and copyright clause. The current law grants a 20-year monopoly on these patents, and by granting them, the federal government is basically sanctioning the caging of workers and tracking of consumers, and Amazon works very closely with the federal government when it comes to its computer systems and other contracts that Jeff Bezos has gotten from the federal government.

Mike Papantonio: Thank you, Brigida. Well, this is just the leading edge of the story.