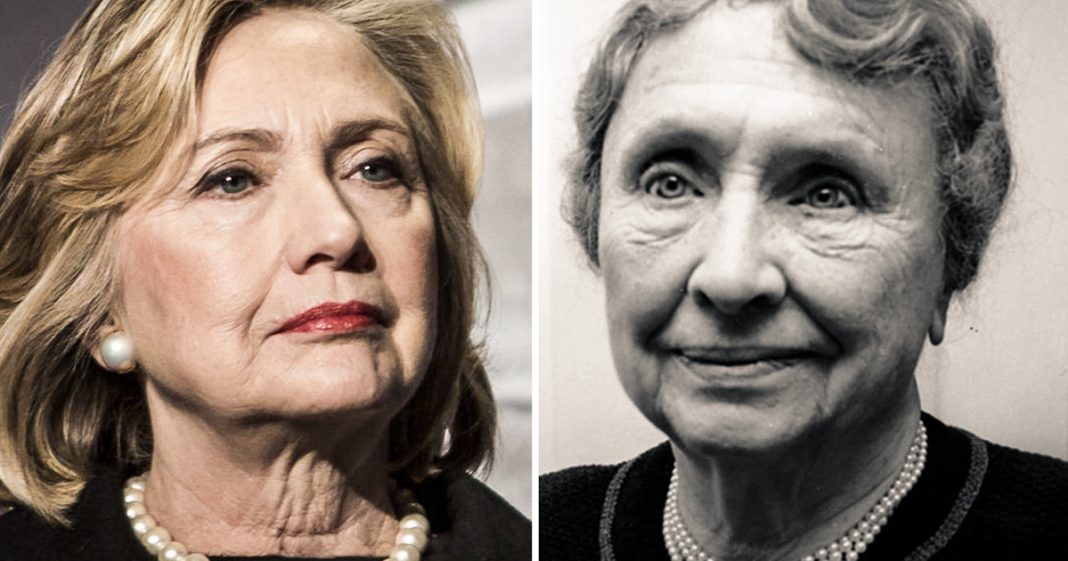 In an alarming vote last week, the Texas Board of Education voted to remove mentions of prominent female icons such as Hillary Clinton and Helen Keller from their new textbooks, but they get to keep in the portions about how Moses influenced the founding fathers and how awesome the heroes at The Alamo were. This is not the first time that the state has voted to literally rewrite history, and as Ring of Fire’s Farron Cousins explains, it certainly won’t be the last.

Good news for anybody in the state of Texas who still happens to be in high school. Because as it turns out in the coming year, you’re no longer going to have to learn about powerful influential women in history like Hilary Clinton and Helen Keller. Last wee the Texas Board of Education voted to remove sections from their textbooks relating to Hilary Clinton, who happened to be the first female nominee of a major party here in the United States, breaking history with that. A first lady, sat in the White House for eight years, was a US Senator, Secretary of State. You don’t need to learn about any of that.

So we’re taking out, well the state of Texas, is taking out real powerful influential people from history, and replacing it with fiction. That’s what they’re doing. They’re trying to bring in Moses and all of these people who likely didn’t even exist, and kick out people who did exist, who made an impact on the world. Because they would rather talk about a fictitious guy with a couple of stone tablets than they would a powerful woman.

But don’t worry, it’s actually not just women who are getting the short end of the stick here. They’re also taking out any references to immigrants coming over to the United States seeking a better life. To put it another way, they’re trying to take off the positive spin about immigrants coming over to the United States. They instead want to paint them as greedy, opportunistic, vermin, I guess would be a good word. That’s probably something that’s going to pop up in those text books.

So it’s no longer the pictures of the happy immigrants on ships going past the statue of liberty looking for a better life. Instead it’s people digging holes and tunneling under the border trying to come over here and steal your job from you. That’s what’s happening in the state of Texas. And it falls in line with what’s happened in the state of Texas over the years, where they have had tried to get rid of teachings of science and evolution. They even tried to re-write how to do math because they just didn’t like it and couldn’t understand it. A move that both teachers, educators of all kinds, and even the students said was absolutely ridiculous.

So, if you want a quality education, the best thing you can probably do is leave the state of Texas. Because as we’ve seen, as they’ve made 100% clear, they’re not going to teach you about what really happened in the world throughout history. They’re going to give you the Texafied version of it, where Moses founded this great country, and his Judeo-Christian values are what currently govern it. There’s no basis in reality for any of that, but to too many kids in the state of Texas, that is sadly going to be the reality that they learn in school now.