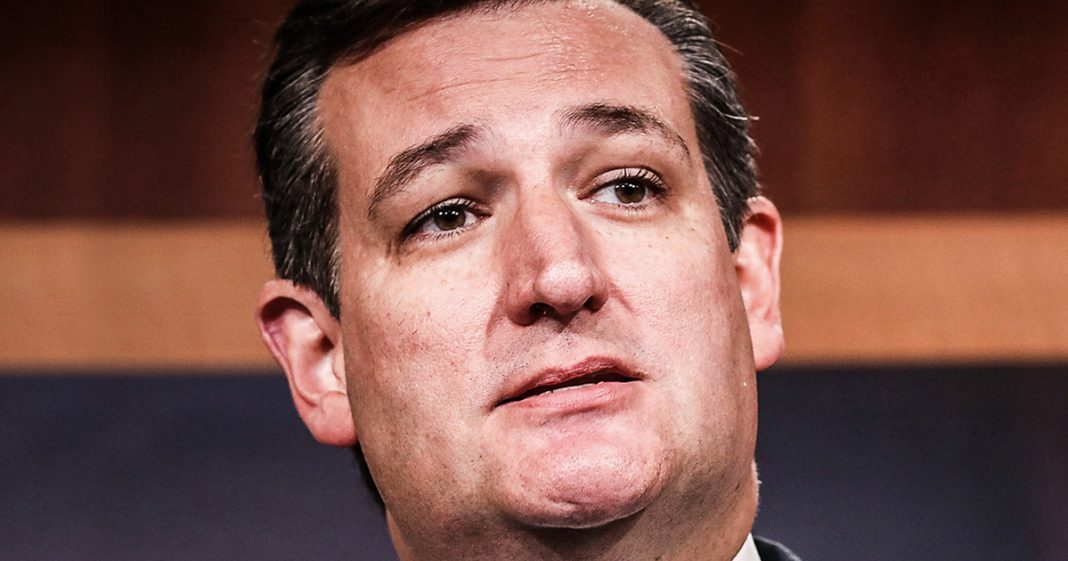 Ted Cruz is so desperate to hold onto his Senate seat that he’s obviously not above stretching or potentially even breaking the law. His campaign recently sent out mailers that said “SUMMONS ENCLOSED – OPEN IMMEDIATELY” but the inside was a just a form people could use to send money to Cruz. This IS a violation of Texas state law, the only question is whether or not someone will step up and file charges against Cruz’s campaign. Ring of Fire’s Farron Cousins discusses this.

Ted Cruz is getting absolutely desperate in the fight for his life against democratic opponent Beto O’Rourke, and recently, Ted Cruz’s campaign thought it would be a good idea to send out donation letters trying to get people to donate more to the campaign, but in order to get people to actually pay attention to them, they tried to disguise them as a legal summons. You can see the picture.

They wrote this big thing, you know, “Summons enclosed. Open immediately,” trying to scare people so that they wouldn’t’ just throw away this campaign letter. You know, you get a letter that says “Summons enclosed” you automatically think, “Oh, no. What have I done? Now, I’ve got to go to court.” That’s basically what that means. And that’s how Ted Cruz is trying to get people’s attention in the state of Texas to get them to donate more money to him.

Now, first and foremost, there was an article in Newsweek that said this is not illegal. I have to disagree with you because there is a law in Texas that specifically states this is illegal, and here it is. It is the Texas Deception Trade Practices Act, specifically one subsection that says if you send out any letter this is a violation, it represents that the solicitation is sent on behalf of a governmental entity when it is in fact not. That is exactly what the letters that Ted Cruz’s campaign, they fit that description perfectly.

The only group that can issue a summons for another human being in this country is the United States legal system run by the government. That would be a government entity. These letters were a violation of that. Big question is will anybody try to prosecute Ted Cruz and his campaign for this? Will they be held accountable in any way, and the answer, as we all know, is no. Nobody’s going to do anything about this. Ted Cruz can get away with pretty much anything he wants. Obviously, Texas, being controlled mostly be Republicans, they’re not going to do anything about it. You know. Beto O’Rourke could try to fight this, try to argue it in court, but that’s going to take away time from campaigning, which is so vital right now with only a few weeks before the mid-terms, so he doesn’t have time to fight that fight. So Ted Cruz is going to get away with it.

But here’s the thing. Here’s the reason Ted Cruz is getting so desperate. Right now, there’s only $30,000 that separate what Cruz has raised from what Beto O’Rourke has raised. $30,000. Both candidates have raised over $23 million, and there’s only $30,000 advantage right now with the Ted Cruz campaign, and he’s trying to shore that up, so he’s scaring people into having to open these letters. And, yeah, it’s pretty obvious, by the letter of the law, that it is illegal. Unfortunately, at this point, nobody has the time to go ahead and try to prosecute the campaign for violating Texas state law.

But let’s just hope, not only that Beto O’Rourke wins, but that once the campaign is died off and people have time to focus on the potential illegality of this, that somebody, a lawyer, a citizen’s organization there in the state of Texas, anyone tries to get the state to prosecute the Cruz campaign for this very clear violation of the Texas Deceptive Trade Practices Act because that is exactly what Ted Cruz did. He knew what he was doing. He knew they were trying to trick people to convince them to open these letters that they would otherwise throw out. He just figured he’d get away with it and he’d win the election anyway, but if he loses, I sincerely hope … Well, hell, even if he wins actually. Let’s be honest. Even if he wins, hopefully, there is somebody with enough courage and enough time in the state of Texas, to look into this, and get this little corrupt weasel out of our politics forever.