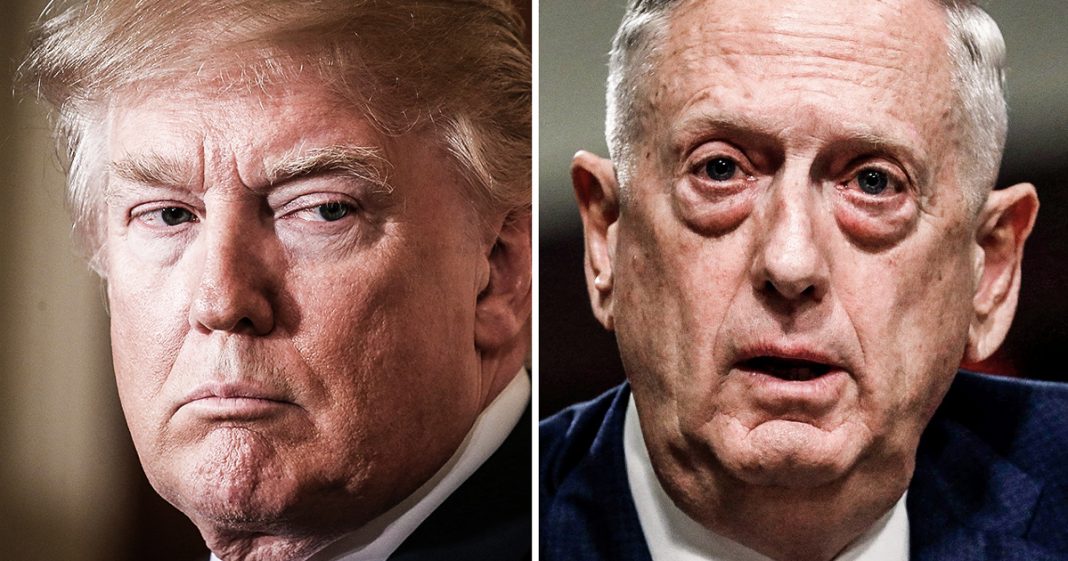 According to a new report in The New York Times, the relationship between Donald Trump and his Defense Secretary James Mattis is becoming increasingly strained, mainly due to the fact that Trump does not trust Mattis and thinks he may actually be a secret Democrat. Trump doesn’t know who to trust anymore, and he’s growing increasingly paranoid which makes him increasingly dangerous. Ring of Fire’s Farron Cousins discusses this.

A major new report came out in the New York Times recently, basically giving us a profile and an inside look at Donald Trump’s defense secretary James Mattis. And the reason they’re doing this is because they believe that Mattis is on his way out. Not by choice, but that Donald Trump is very likely to fire him in the coming months. That has been a, basically, an idea that’s been floated around by the media for several months now, that Mattis would probably be the next person to get the ax. And the New York Times piece kind of explains why that is.

First and foremost, Donald Trump is unhappy, not with Mattis’s performance, to a degree, but mostly because everybody considers Mattis to be the adult in the room. They think he is the one reigning Trump in and coming in and adding a little bit of maturity and expertise to his position, and Donald Trump doesn’t like that. Donald Trump is very jealous of that, and that jealousy is going to lead him to fire one of the only people in his administration who’s actually slightly qualified for the position that they hold.

But there’s another thing, and this actually popped up only recently. And that is that Donald Trump actually thinks Mattis may be a secret Democrat. Here’s the reasoning behind that: James Mattis, according to the article, doesn’t think the military should be used as a political tool, something that Donald Trump and nearly every Republican in this country does think. They think we should be using the military as a political tool. They try to use it to win elections, they wrap themselves in the flag while ignoring the plight of our veterans here in the United States. Donald Trump wants to throw his big grand military parade. Mattis doesn’t think it’s a good idea, thinks it’s a waste of money, so yeah, maybe that makes him a secret Democrat.

I wouldn’t be surprised if Donald Trump believes that James Mattis is the person who wrote that New York Times op-ed, and to be honest, I wouldn’t be shocked to find out that it, in fact, was him who wrote the op-ed. But a lot of this actually stems from that. It stems from the fact that Donald Trump has nobody left that he can trust. They still can’t find who wrote that article, and until they do, and I hope they never do, Trump’s going to suspect every single person he encounters of being the author of that. And as such, he’s going to grow increasingly paranoid, and the more paranoid he gets, the more dangerous he gets.

But one thing’s for certain, all of this in-fighting that he’s having with James Mattis, and all this attention that Mattis is getting now for allegedly being the adult in the room, all that means is that Mattis will likely be out the door possibly before the end of this year.